“The sacred mountain of the Kiltia sect, located to the north of the Jagd Ramooda. A temple was built here by believers to mark the place where the founder of the Light of Kiltia began to spread the teachings. There are accounts of the holy city here dating back to writings from the age of the Galtean Alliance.

In its long history, Mt Bur-Omisace has never fallen under the control of any foreign power. On the understanding that Kiltia’s followers would exempt themselves from political dealings in other lands, Kingdom and Empire both formed a pact to guarantee the holy city’s independence, an agreement which stands to this day.

It would not be an error to call Mt Bur-Omisace itself a shrine to Kiltia. Apart from the temples, there are only a few residences, with roadside shops catering to the steady stream of pilgrims. In recent years, the refugees from war-torn lands have gathered here, forming camps on part of the mountain. The priests of Kiltia give them aid that they might live here in peace.

As Mt Bur-Omisace is surrounded by jagd, the faithful must cross the Inner Naldoan Sea by boat in their pilgrimage to the holy city.”

Mt Bur-Omisace is relatively small – it consists of a straight pathway that leads directly to the temple and into the Hall of Light. There is a Chocobo Stable at the top which you can use to make traveling through the Paramina Rift easier later on in the game.

The first thing that you should do is explore the two shops that are available nearby. You can purchase the following:

You should buy the

Nishijin Belts (for an upcoming boss fight), and one or two

Ice Shields depending on how many of your party members you can efficiently equip them to.

At this point in the game, you should also have all of the

Forgotten Grimoires purchased. Take some time to go grinding and leveling if you do not have enough gil or use the Dustia Level Grinding trick to earn some quick gil if needed. 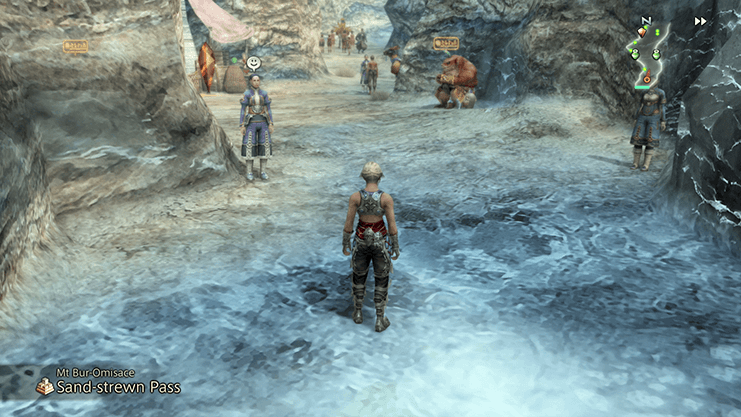 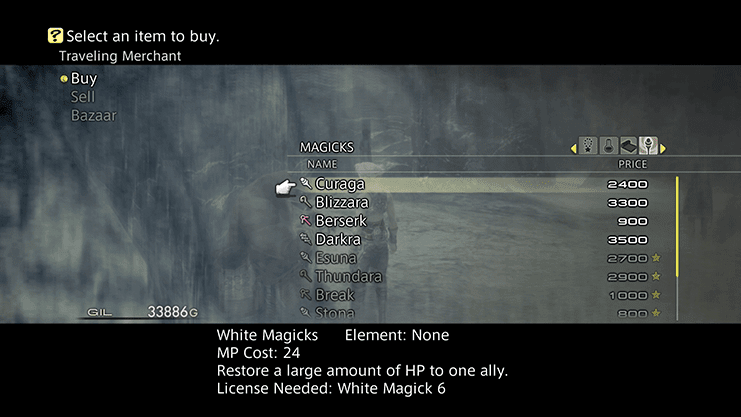 Speak to the Moogle from the Cartographer’s Guild as well and purchase the map of the Paramina Rift for 3,200 gil and you might as well buy the map of Mt Bur-Omisace for 15 gil. It is fairly cheap but, as mentioned above, the pathway to the temple is entirely linear.

Important Note: If you proceed up the pathway and continue the story, Larsa will leave your party shortly thereafter. As a result, you should take this opportunity to complete any of the side quests that you have missed up until this point as having Larsa in your party will make them much easier to complete. His compliment of fairly strong attacks and Curative aides will be lamented once he is gone and you may have to adjust your party makeup and strategy going forward.

Now that you have reached Mt Bur-Omisace you can complete another portion of the Ktjn side quest. Use the orange Save Crystal to teleport back to Rabanastre and then speak to the Moogle to teleport to the Muthru Bazaar. Speak to Ktjn on the steps and she will end the conversation by asking:

Choose the last answer, “I think it’s a good idea”, as this is the only answer that will net you points towards the best reward for the side quest. Swing by the Clan Provisioner as well and purchase

Bubble Magick if it is available. 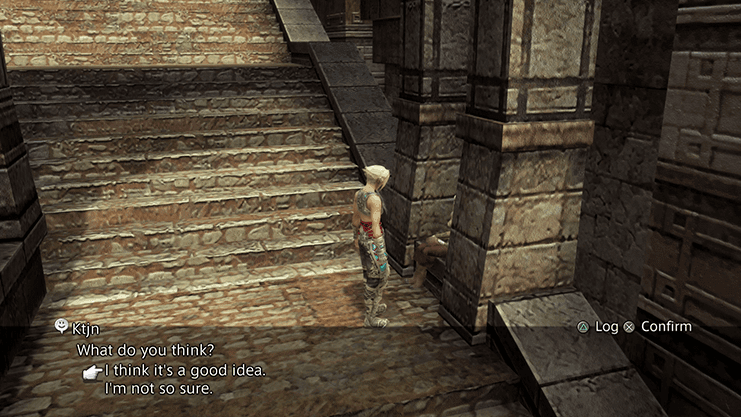 Pick them both up before you leave.

You should also visit the Sandsea one more time to pick up another Hunt. Check the Notice Board to find Bill No. 12 for Feral Retriever (Hunt 13: Befoulment of the Beast). The Hunts for Trickster and Antlion are fairly difficult to attempt at this point (and are not recommended), but the Hunt for Feral Retriever can be completed immediately.

That being said, you should take the time to complete any of the Hunts that you have missed up until this point. As mentioned above, having Larsa in your party for a limited amount of time remaining makes this the ideal time to complete them.

The side quest to defeat the Earth Tyrant is still fairly difficult at this stage of the game, but it is worth giving it an attempt while you still have Larsa (unless you did it as part of the previous seciton of the strategy guide already):

Earth Tyrant
Helping Rimzat deal with the creature causing all of the sandstorms in the Dalmasca Westersand. 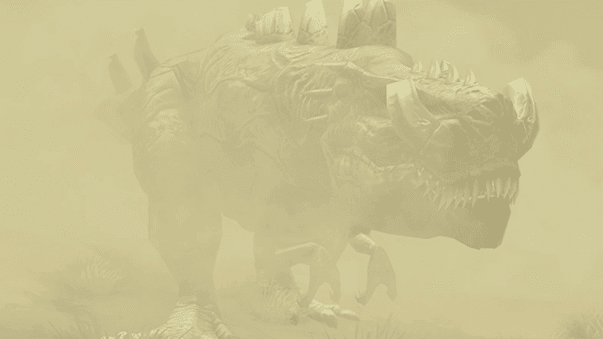 The next Hunt to complete is the one that was just picked up in Rabanastre which became available after you reached Mt. Bur-Omisace:

Hunt 13: Befoulment of the Beast
Traveling into the Paramina Rift to take down the creature that has been attacking travelers on their way to Mt Bur-Omisace – the Feral Retriever. 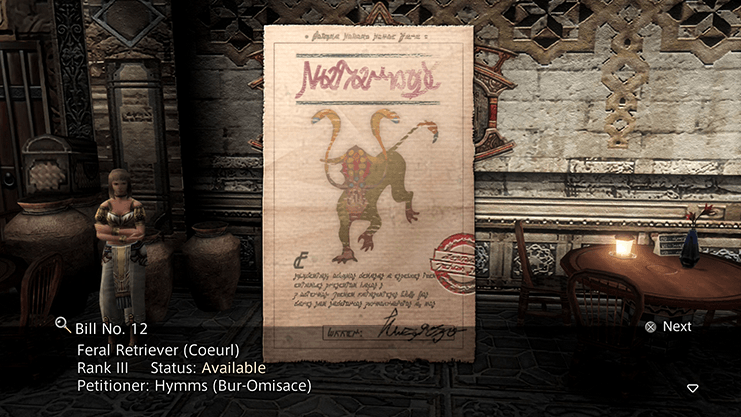 This is one last reminder that Larsa will leave your party shortly if you continue up the trail towards the temple in Mt Bur-Omisace. If you are done with the side quests and are ready to move on, travel north from the orange Save Crystal. But make sure that you have completed all of the Hunts and side quests listed above.

The pathway leading through the Temple Approach is completely linear. Walk past all of the refugees and into the next area. There is a short video that plays as you enter the actual temple grounds. 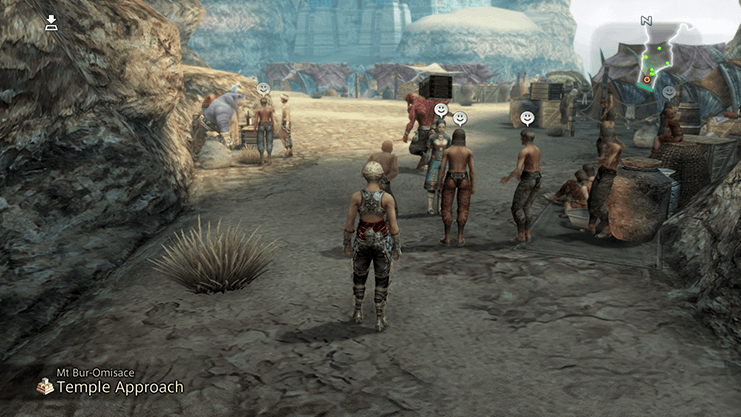 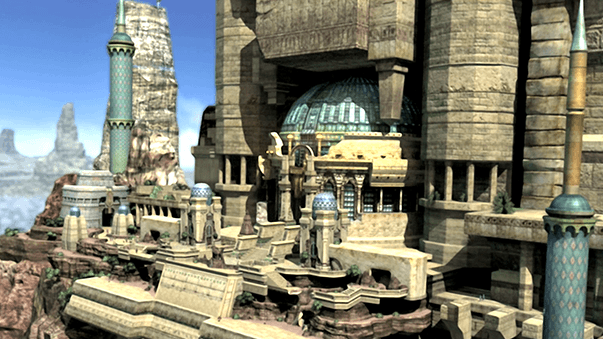 Follow the pathway past all of the refugees, acolytes and Kiltias and go through the temple doors. 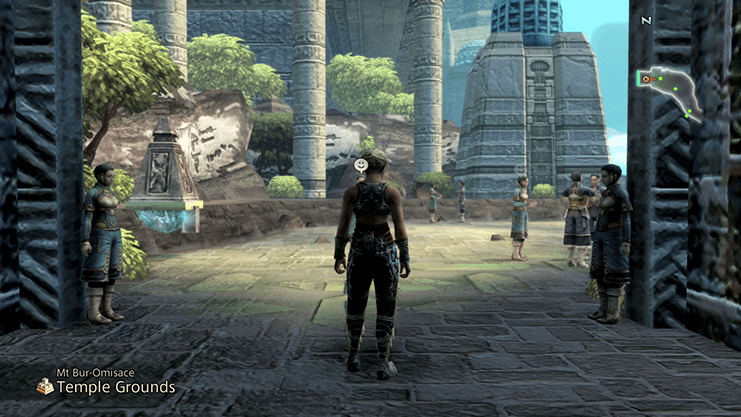 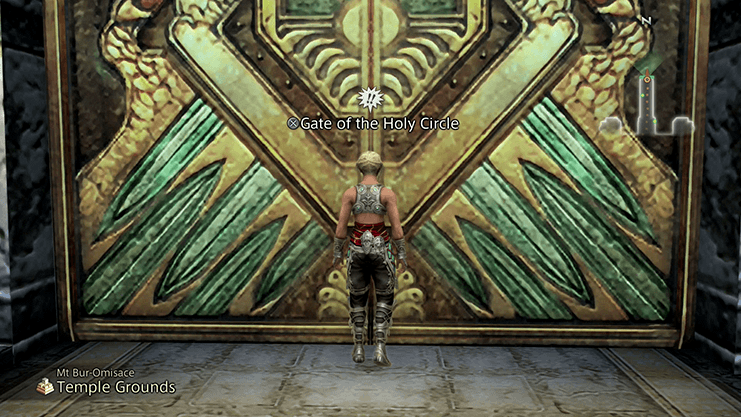 Hall of the Light

Approach the figure at the end of the hall to initiate a fairly lengthy cutscene. 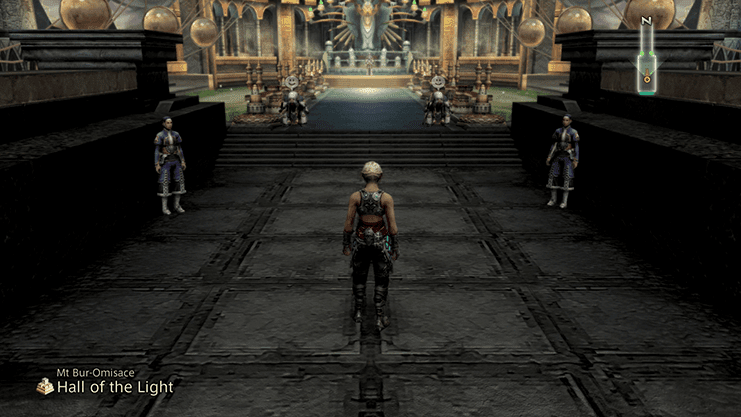 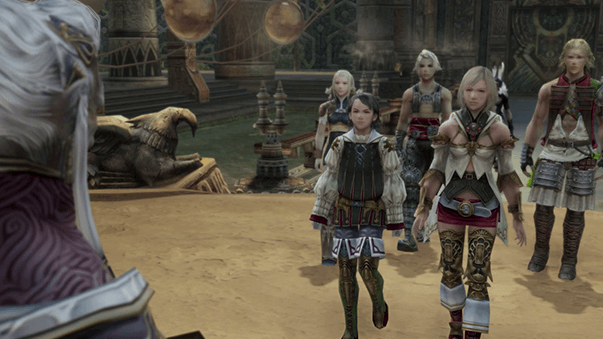 The Gran Kiltias Anastasis, Al-Cid Margrace and Larsa will discuss plans to prevent the impending war. The three of them plan to combine their forces to save Ivalice. Larsa will learn from Al Cid that his father, Lord Gramis, has been killed and that his brother, Lord Vayne, has taken the throne. 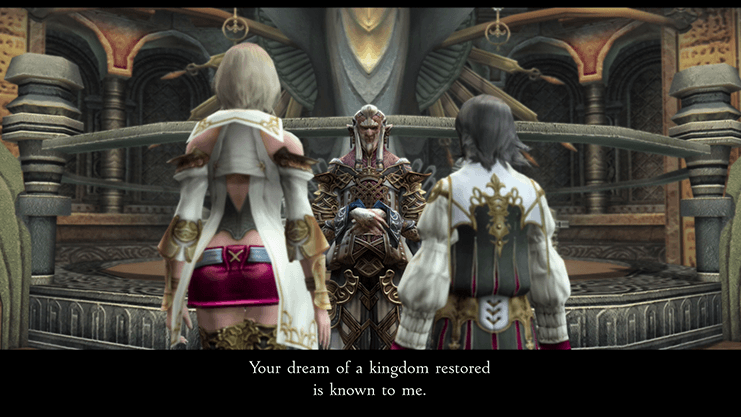 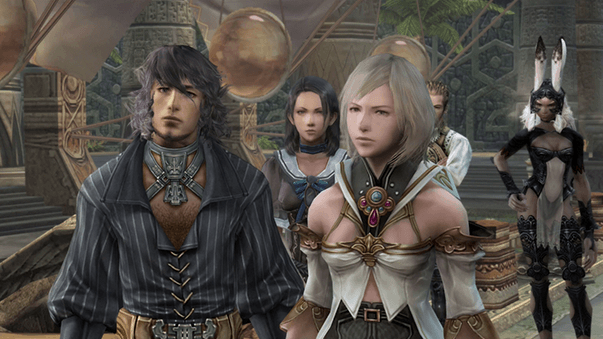 Sword of Kings to find a power greater than the Nethicite to counteract it. Larsa will leave the party and you will be free to travel back down to the base of Mt Bur-Omisace and to travel through the Paramina Rift to the Stilshrine of Miriam. 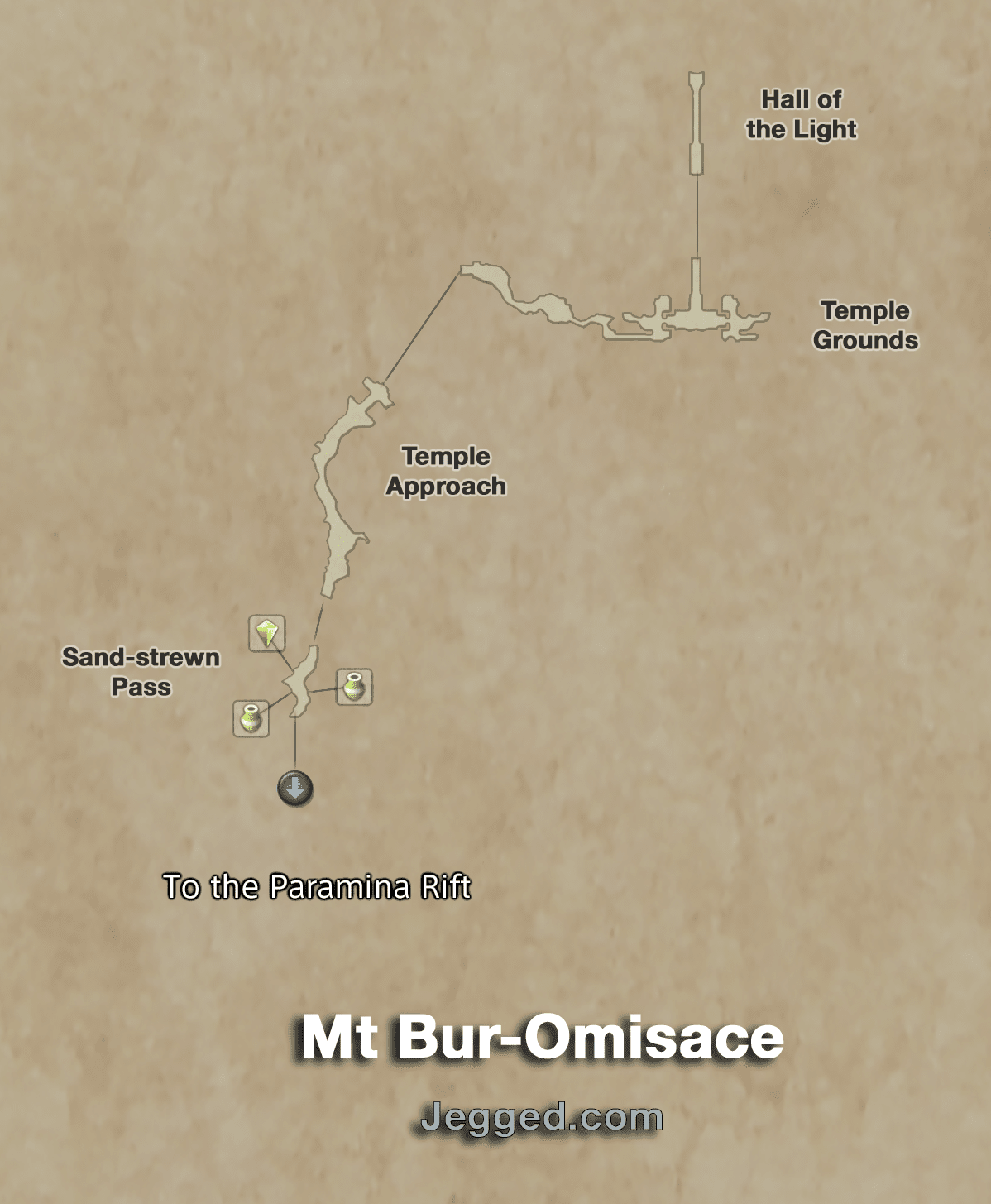