This Hunt becomes immediately available after you have defeated Thextera in Hunt 2: Wolf in the Waste. This fight is very difficult without having Penelo in your party so be sure to travel to the Nomad Village in the Giza Plains after speaking with Old Dalan in Rabanastre to add Penelo to your party.

The Mark for this hunt is the Flowering Cactoid. It has a very high ‘Evasion’ stat and can be incredibly difficult to take down if you are caught unprepared. Make sure to level your characters up to approximately level 5 or level 6 and consider traveling to the Nalbina Fortress before engaging in the fight. The Nalbina Fortress can be reached from the Dalmasca Estersand (Yardang Labyrinth) location where the Flowering Cactoid can be found.

Dantro in the Dalmasca Estersand (the area where Rogue Tomato was found) in the Outpost. 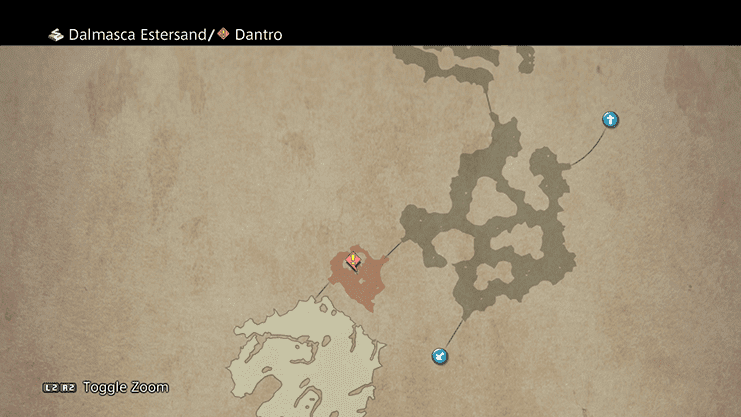 As mentioned above, the Flowering Cactoid is located in the Yardang Labyrinth of the Dalmasca Estersand. This area is one screen north of the Outpost where Dantro is found. Use the map below to help you pinpoint where to find it. 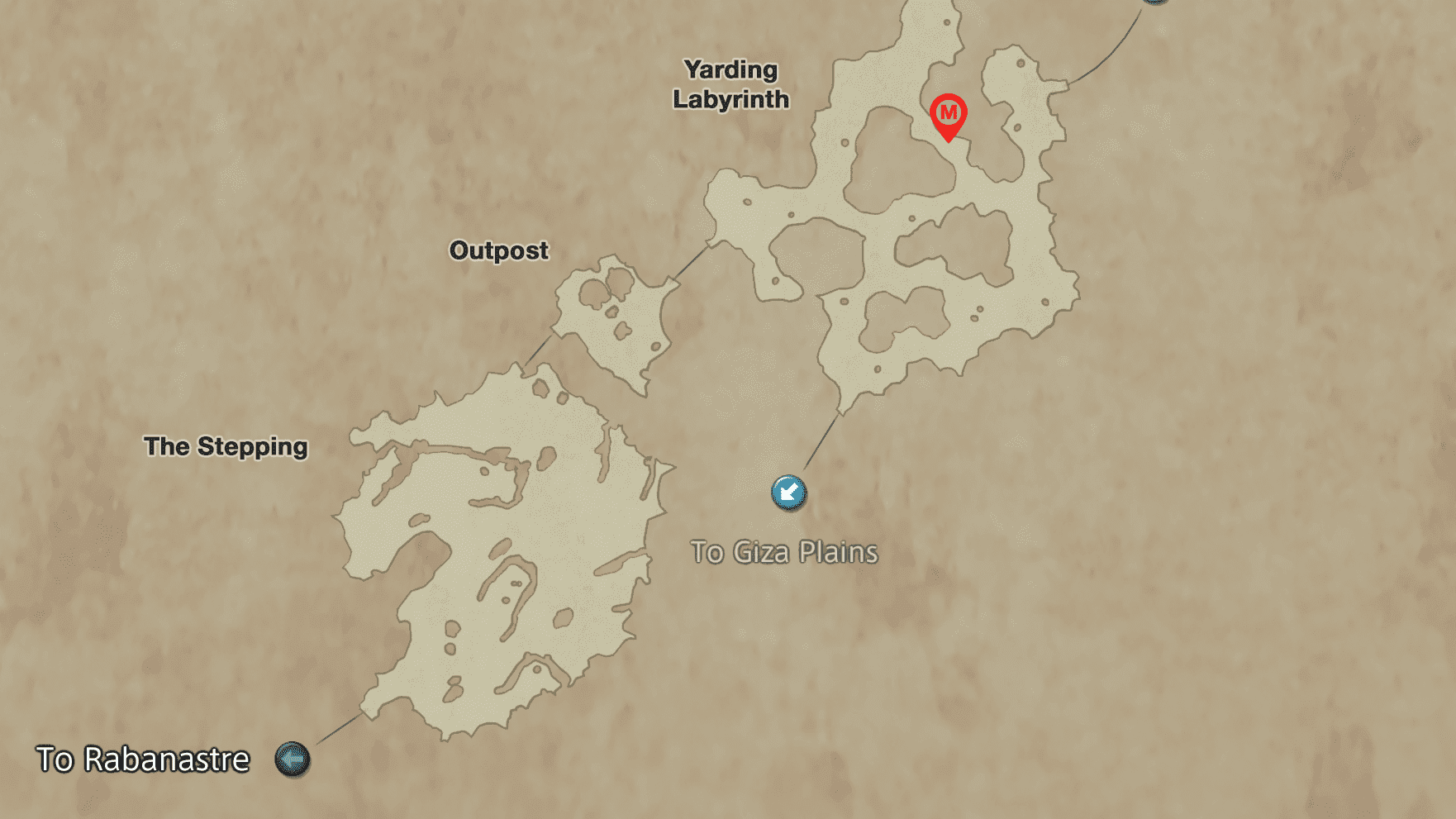 This fight requires a fair amount of preparation. Make sure that you travel to the Nalbina Fortress and purchase as many of the following as you can afford:

Mage Masher (weapon for either Vaan or Penelo),

Clear the Yardang Labyrinth of as many of the monsters as you can before engaging the Flowering Cactoid as it will run away from your party at some point in the fight in an attempt to get help and to heal itself. Cast

Protect on both of your party members, cast

Slow on the Flowering Cactoid and spam Fire Magick as often as possible.

Fire Magick is going to be your strongest attack as the Cactoid has a ton of evasion and very few of your regular attacks will hit. 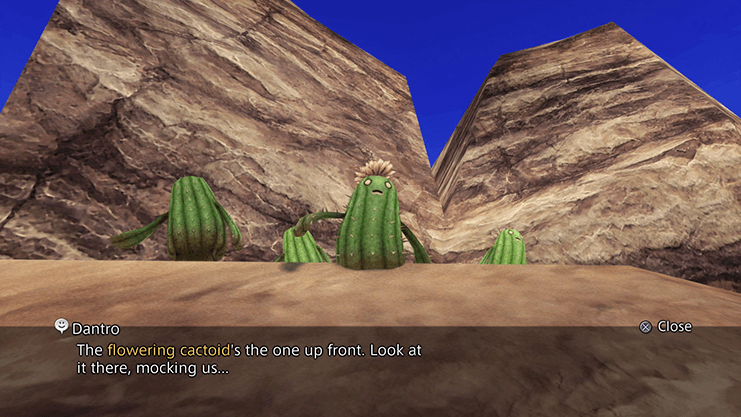 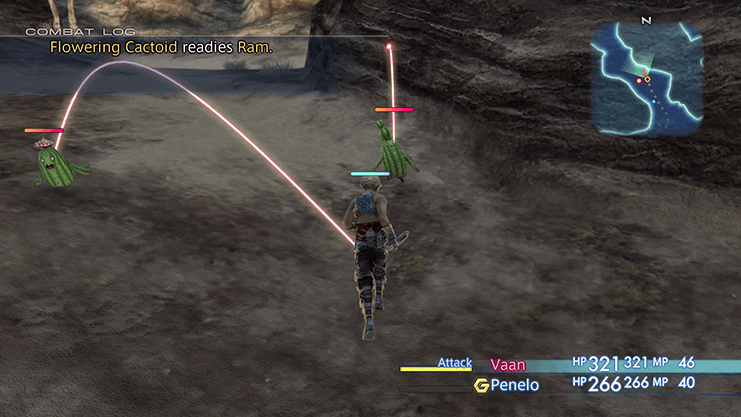 The Flowering Cactoid will use an attack called “1000 Needles” once its HP gets low. This move, if it hits, will instantly kill the targeted character. Use a

Phoenix Down to bring that character back to life and continue the attack until you burn through all 755 HP.

Pick up the Cactus Flower at the end of the fight and return to Dantro at the Outpost.
Rewards include: 500 gil and 10 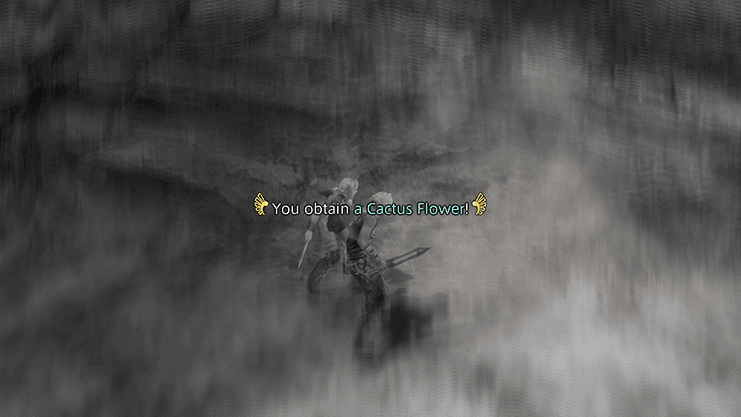 Note that you can now complete the first portion of the Desert Patient side quest. Speak to Dantro after defeating the Flowering Cactoid.

Desert Patient
This quest involves taking the Cactus Flower retrieved from the defeated Flowering Cactoid Mark to Dantro’s wife further into the Dalmasca Estersand. The second section of the quest cannot be completed until you can reach the Broken Sands later in the game. 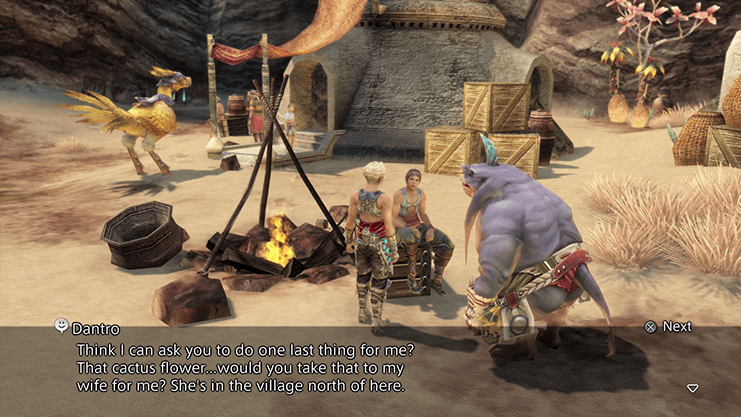 This concludes Hunt 03: Dalmasca’s Desert Bloom. Note that in The Zodiac Age version of the game you can already purchase

Decoy Magick from the Clan Provisioner in the Muthru Bazaar in Rabanastre after completing this Hunt.