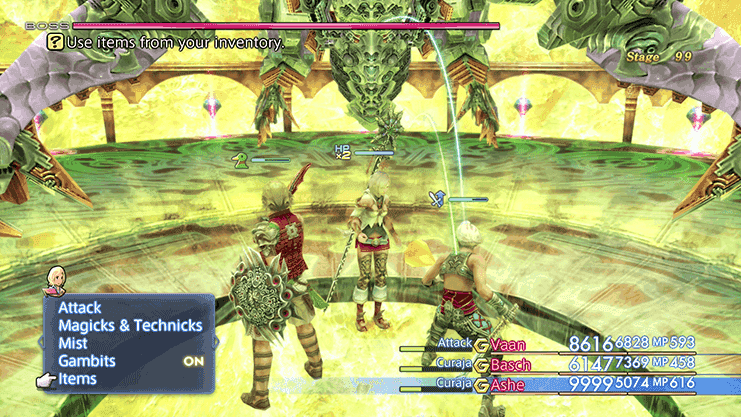 This battle is the same as the optional side quest to defeat Omega Mark XII in the Great Crystal. However, in the side quest section, it lists two strategies for defeating Omega Mark XII – the Reverse Strategy and the Brute Force strategy. This Trial Mode section only lists the Brute Force strategy below, as it is strongly recommended that you utilize this strategy. It makes for a much easier transition into Stage 100, the most difficult Trial and the most difficult battle in the game. That being said, you can still use the Reverse strategy as well. Check out the Omega Mark XII section for more information on that strategy.

Prepare all three of your party members for the initial onslaught, including preparing their gear, the initial spells and their Gambits. Let’s start with gear…

Equip all three of your party members with a

Bubble Magick is a much less effective route of increasing each of their HP because it will need to be recast each time that party member is KO’d, which will potentially be quite a few times using this strategy.

You should also equip all of their strongest armor and equip all three party members with a Shield, if possible. You should focus on surviving the first portion of the battle rather than trying to do any damage whatsoever.

Curaja as often as possible. Setting up am Ally: HP < 70% > Renew is ideal. Having two party members that can cast healing spells, while the third focuses on using

Wither, will increase the odds of your party surviving. Make sure that they have an

Arise Gambit or a

Phoenix Down Gambit set up as well.

One party member should continue to use

Wither until Omega Mark XII’s attacks become manageable. Once you reach this stage, switch out your party members equipment for equipment that has higher attack damage (removing the Shields previously mentioned above) and reduce threshold used for your party members casting healing spells so that they can all start damaging the boss.

Expect that your party members will die a lot using this strategy and there is an element of luck involved, so don’t be ashamed at having to try this multiple times. This is the second-to-last Stage of Trial Mode and is expected to be one of the most difficult.

Towards the end of the fight it is extremely important that you begin preparing your party members for the next battle. Make sure that they have all of their protective buffs cast including

Dispel Berserk as soon as it is cast. It will be next to impossible to successfully complete Stage 100 of Trial Mode if you enter the battle with one (or more) of your party members hit with the Berserk status effect.