This hunt becomes available any time after you have completed the Ancient City of Giruvegan and the Great Crystal. You should return to Balfonheim Port to speak to Reddas and have him join your party before starting this hunt as having Reddas in your party will be helpful.

The Bill lists the petitioner as a traveler who frequents the Aerodromes across Ivalice. When you approach the young child, he will be listed as Traveler, but the name changes to “Son” once you speak to him. He and his family can be found in all of the Aerodrome ports of Ivalice (although in different locations inside each of the Aerodromes). 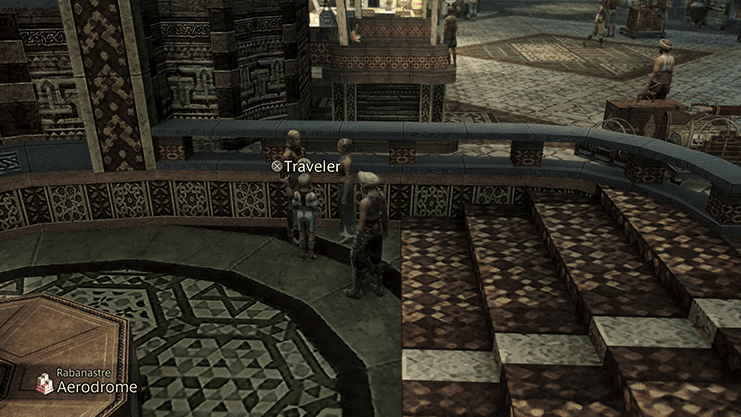 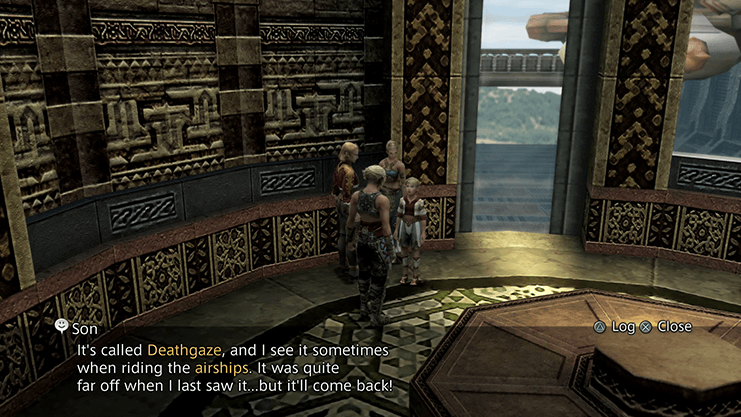 The Traveler / Son will tell you that he saw a Wyrm on the deck of one of the Airships, but his family does not believe him. Once you have initiated the Hunt, you now have a chance of running into Deathgaze any time to take an Airship from one location to the next.

Speak to the Traveler / Son each time you arrive at an Aerodrome (even if it is one you have already been to) and the chances of you encountering Deathgaze will double according to the following:

The chances of encountering Deathgaze will never go higher than 64% and you must speak with the Son each time you arrive at an Aerodrome after riding an Airship in order for the odds to improve.

Choose to take a “Private Cabin” each time to speed up the process and eventually a Steward of the Airship will interrupt you during your travels to ask if you would volunteer to fight Deathgaze who is attacking the ship. Deathgaze is fought on the top level of the Airship. 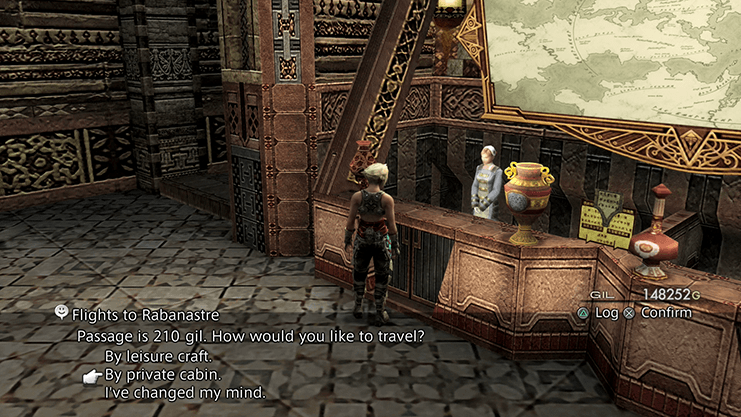 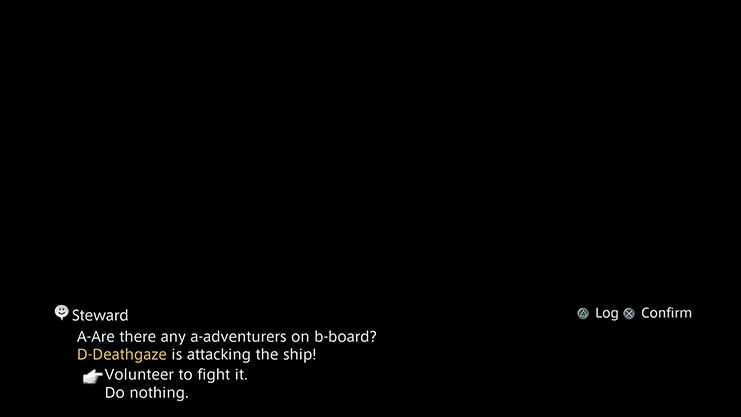 Deathgaze will hit you with a plethora of negative status effects and its most devastating attacks are all Magick-based. Thankfully though, Deathgaze is not immune to

Silence. You should set one of your characters up with a Silence Gambit to ensure that it remains Silenced throughout the fight. 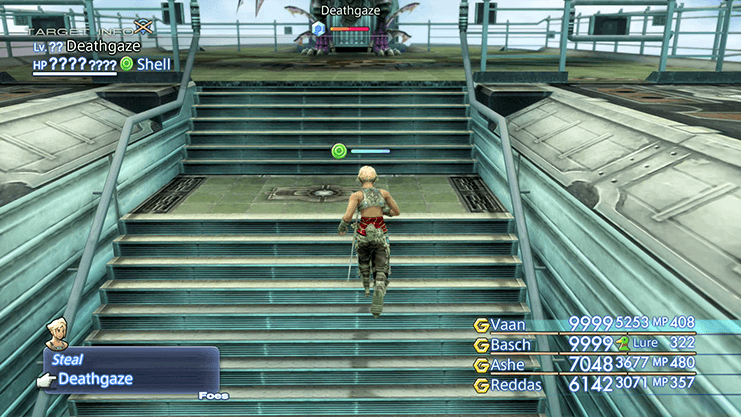 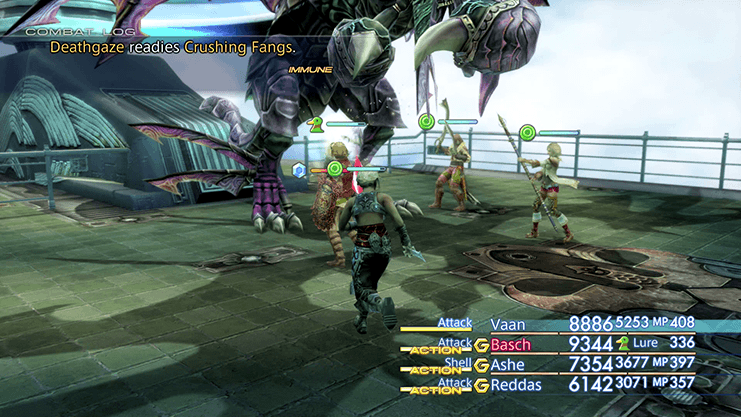 Keep your other protective buff spells up as well such as

Faith. Especially important during this battle are

Shell will greatly reduce the amount of damage done by spells and will prevent negative statuses from taking effect.

Bubble, aside from increasing each party member’s maximum HP, will also prevent the Disease status which Deathgaze is capable of inflicting.

Deathgaze’s regular attacks are fairly powerful and its Crushing Fangs attack may instantly KO a character, so be prepared to have to revive party members. 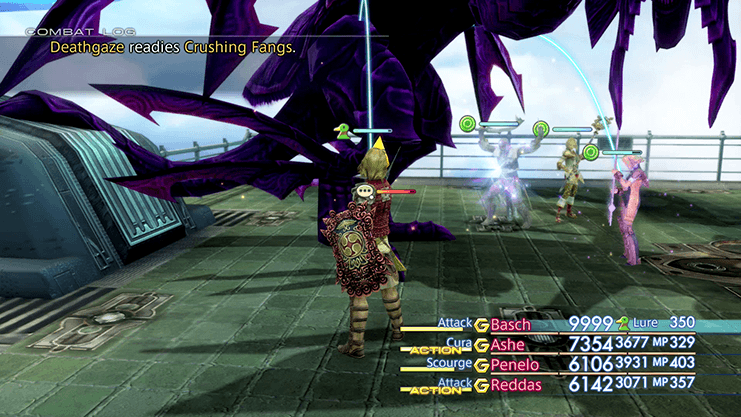 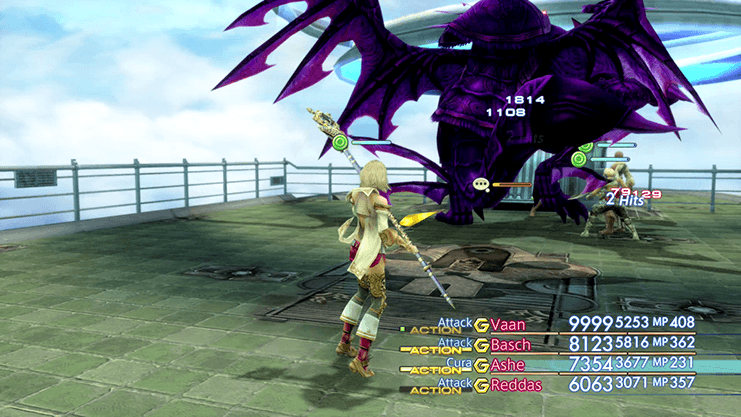 Deathgaze will use Restore on itself if it is not Silenced. It will also cast a Physical Paling during the battle which will make it immune to physical attacks. You can either switch to Magick-based attacks, use Technicks or wait out the Physical Paling until Deathgaze is no longer immune which takes approximately 1 minute. Casting

Bio works extremely well as it is also not immune to Sap.

This concludes the Hunt for Deathgaze. Speak to the Traveler / Boy in whichever Aerodrome you land to receive your rewards which include 3,400 gil and two 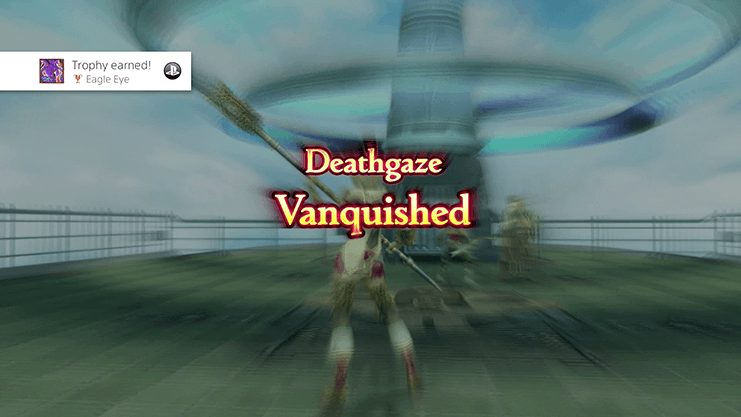 This Hunt is normally completed after Reddas has joined the party when they return to Balfonheim Port for the second time. Click on the link to return to that section of the walkthrough.

The Eagle Eye Trophy is obtained automatically once you have defeated Deathgaze. 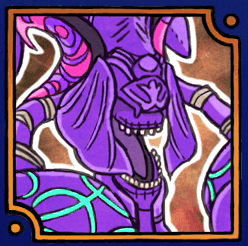