This portion of the game takes place after your team boards the Airship, Fahrenheit, and defeats Evrae, the Guardian of Bevelle.

Poison Ward as you will not be requiring those abilities any further. 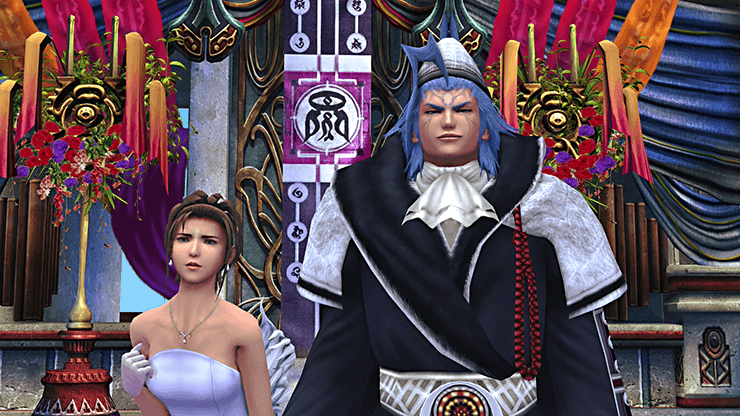 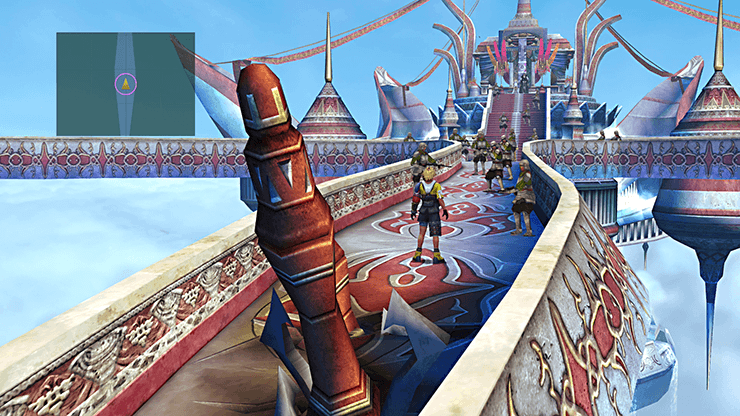 Move forward to initiate your first battle against three Warrior Monks. Take care of the red Warrior Monk in each group first as they are the ones that are capable of inflicting the most damage with their flamethrower attacks. 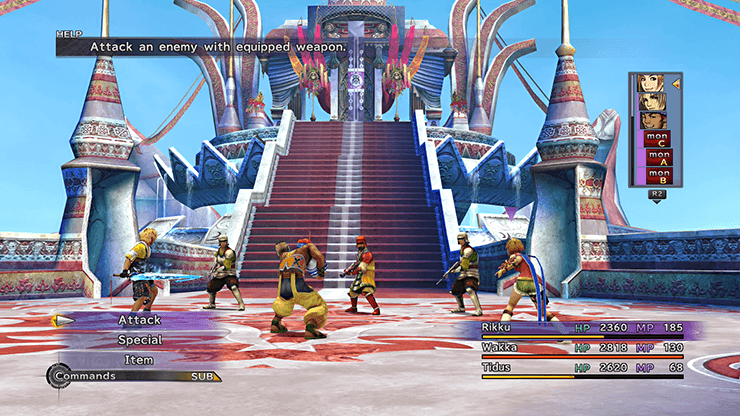 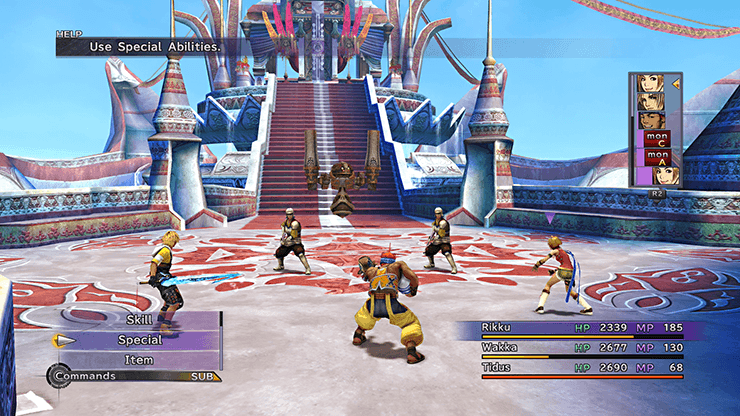 You will face your first YKT-63 enemy in the second fight (shown in the second screenshot above). Just be cautious and note that these machina are not weak to Lightning based attacks. They are weak to Fire and Water-based attacks instead.

Lancet on a YKT-63 enemy in this area. Check out the Overdrive section for more information on Kimahri’s Ronso Rage. 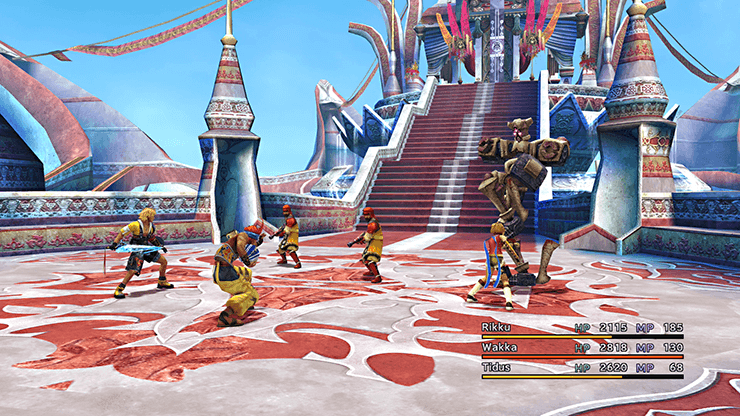 Their Thrust Kick attack will remove your characters from the battle permanently so destroy the YKT-63’s as quickly as you can.

You will not make it all the way to the top of the platform before the story will continue. You get to watch a few more cutscenes.

The Bevelle guards will surround Tidus and the team. As they do, Yuna will reveal her true plan to Maester Seymour, which was simply to perform the sending for Seymour. Mika will beg her to stop before the ritual is concluded by threatening the lives of Yuna’s guardians. 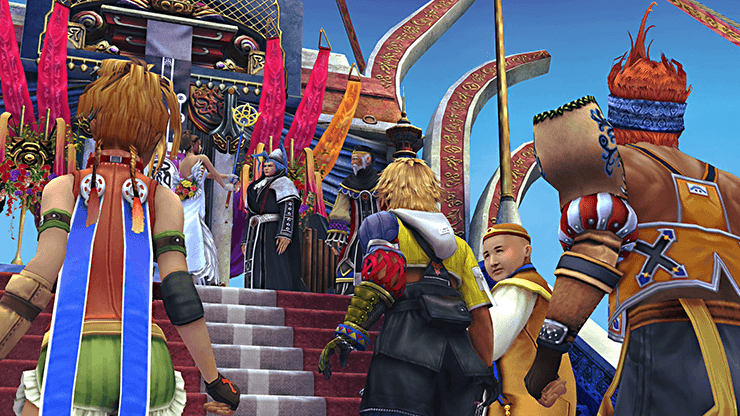 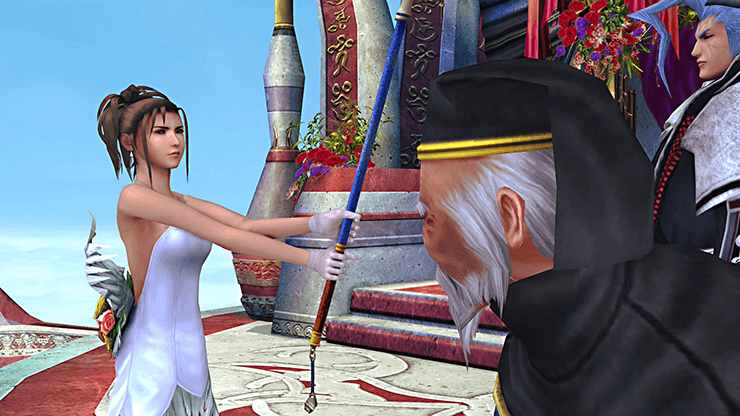 An FMV will occur wherein Maester Seymour will force a kiss on Yuna as they complete the marriage ceremony. Seymour will then instruct his guards to kill the guardians. Yuna will then threaten to throw herself from the top of the tower if they don’t let her guardians go free.

Yuna will jump from the tower and will be saved by her Aeon, Valefor, before she plummets to the city below. The team will then escape from the tower. 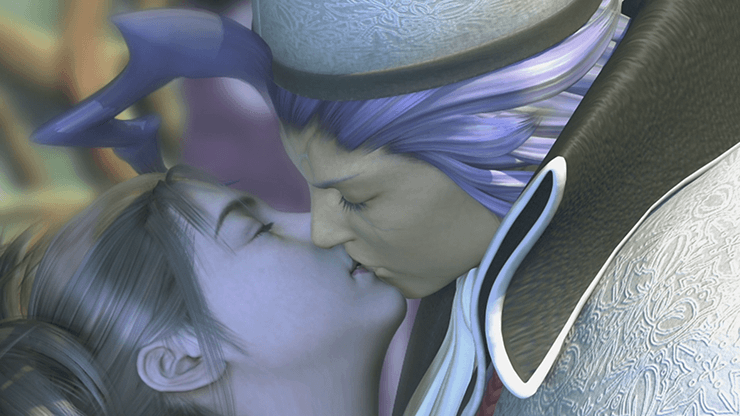 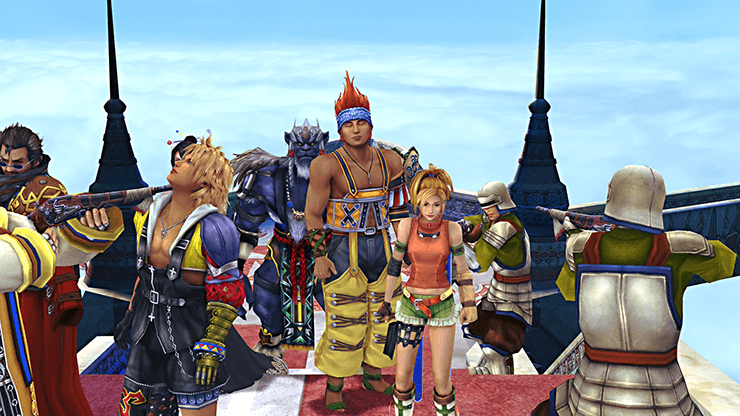 The next portion of the game takes place in a small section of Bevelle.

Examine the control panel and ride the stairway down. Go through the door into the next hallway. 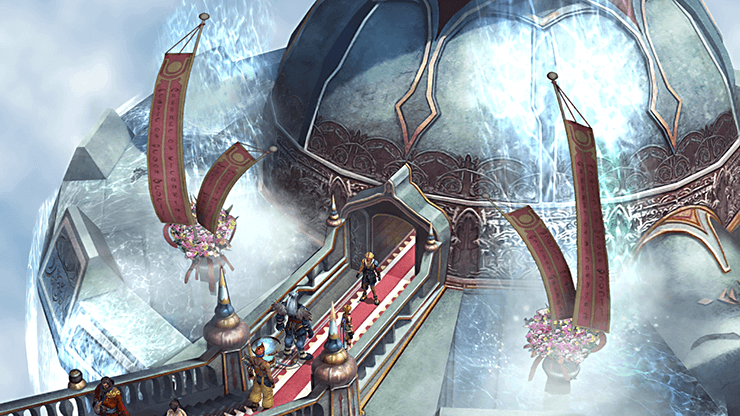 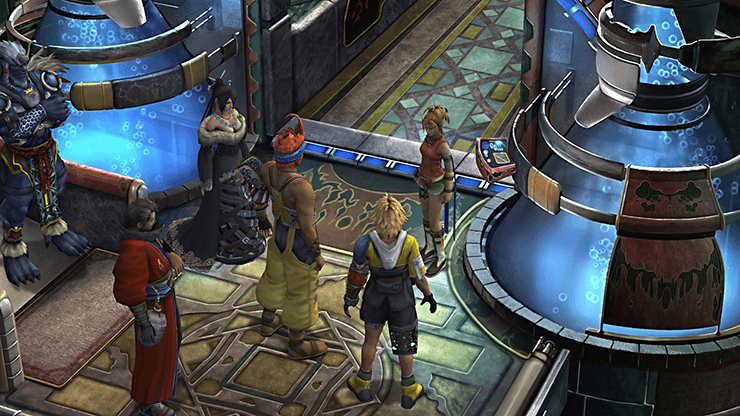 Move down the hallway and down the staircase to meet up with your team again. Do not forget to grab the

Save your game at the Save Sphere before you continue. Proceed through the doorway to begin the Bevelle Cloister of Trials. 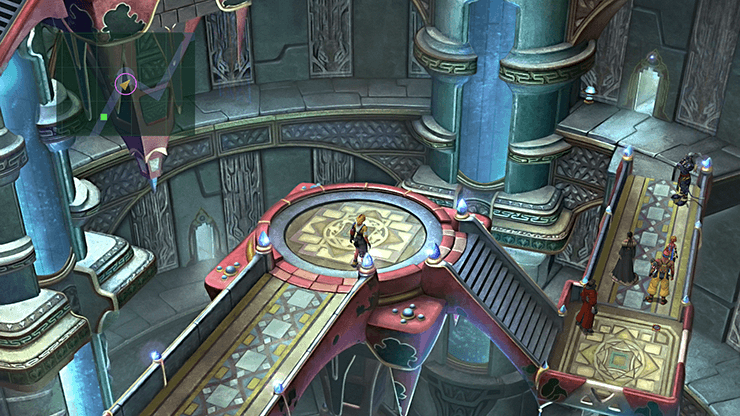 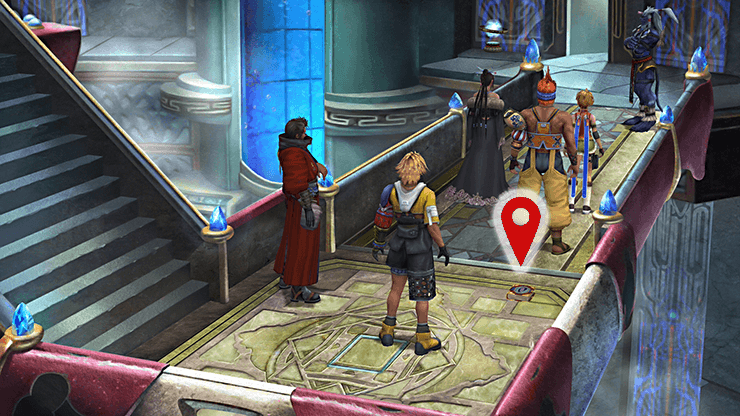 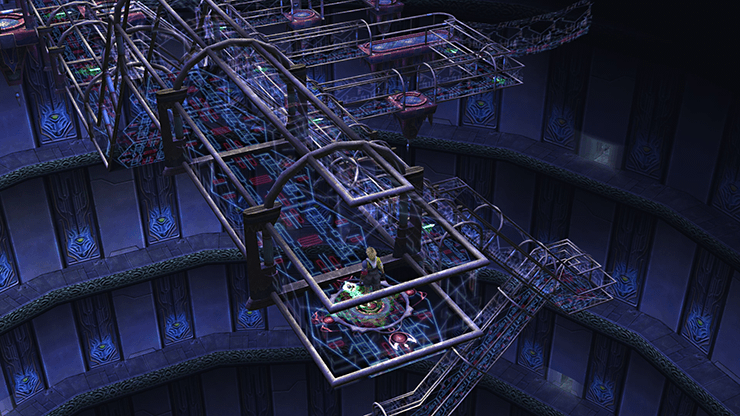 Kimahri will help Tidus break in to the Chamber of the Fayth where he reconnects with Yuna. Yuna will be speaking with the Fayth and will receive her next Aeon, Bahamut. The team will be ambushed by Wen Kinoc and the Crusaders as they exit the Cloister. 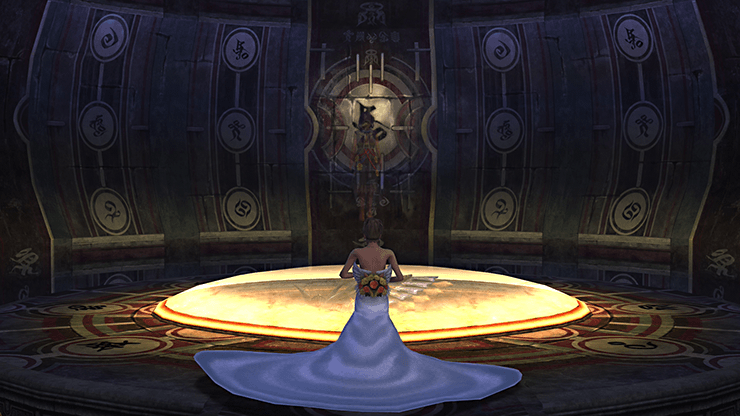 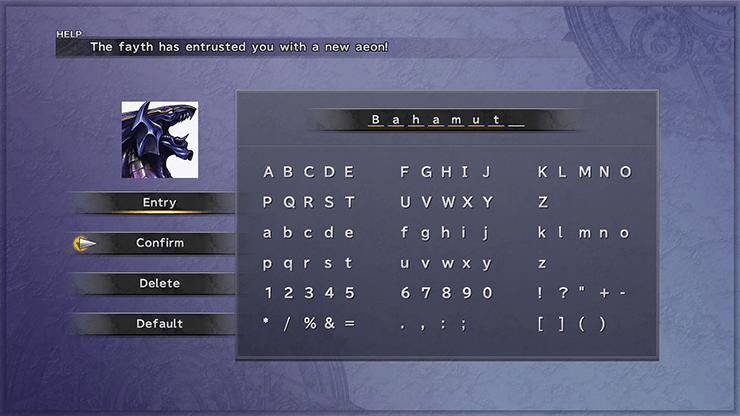 The group is forced to stand trial for their actions against Maester Seymour in Macalania Temple. The “High Court of Yevon” is overseen by Maester Kelk Ronso.

Yuna will explain to the court what happened regarding Maester Seymour Guado, his father, Lord Jyscal, and how Maester Seymour has passed away and needs to be sent. She will justify her actions but the team will be thrown into prison (the Via Purifico) despite her protests. 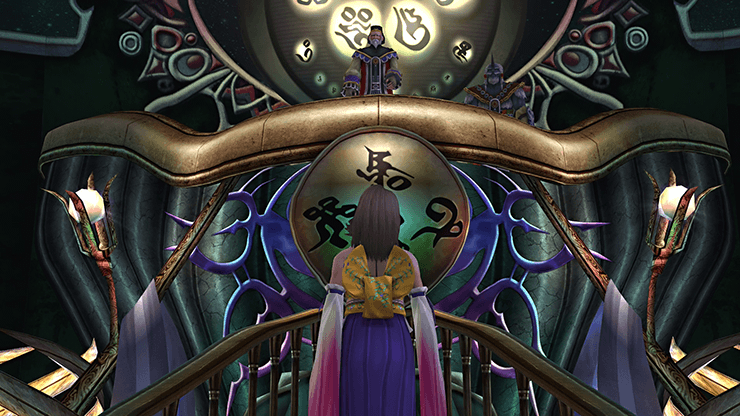 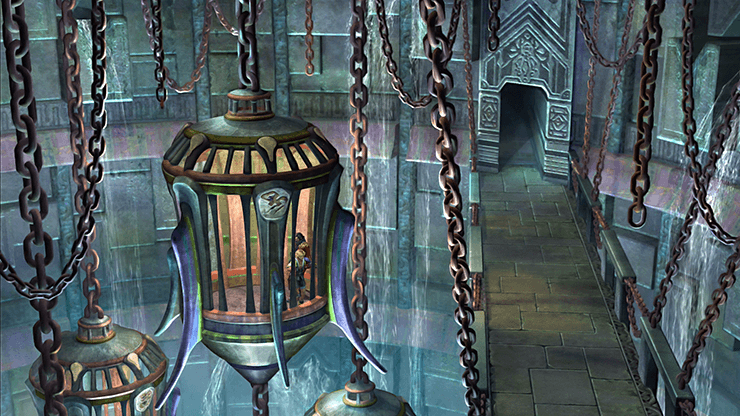