The Zanarkand Cloister is completed once the team reaches the inside of the Zanarkand Ruins. 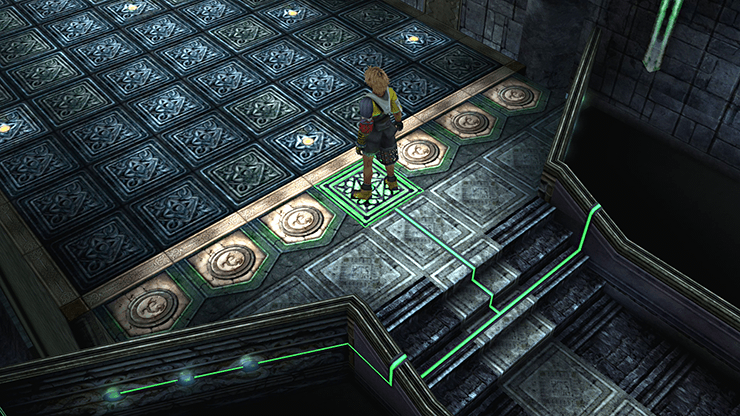 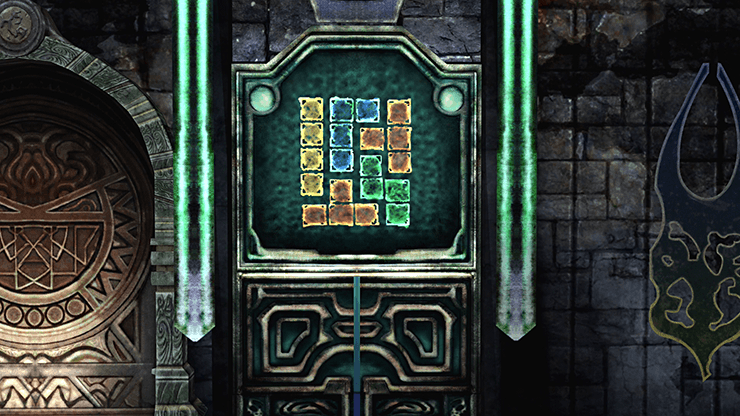 The first switch is directly ahead of Tidus: 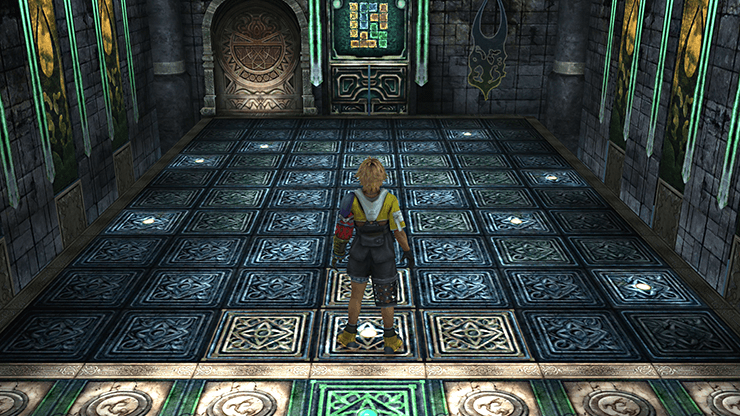 The second switch is on the right hand side of the room: 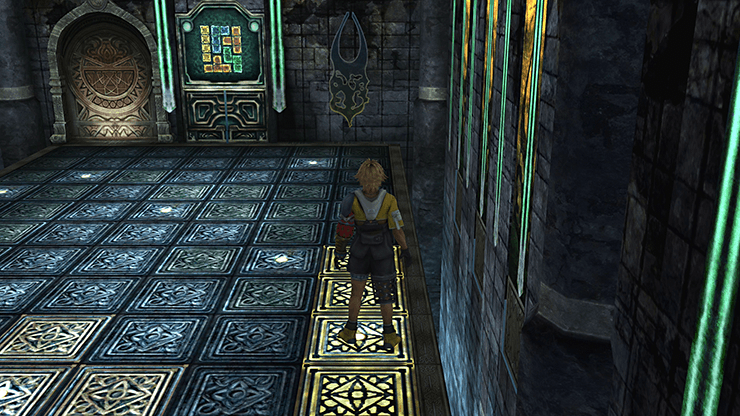 The third switch is directly north of the second one: 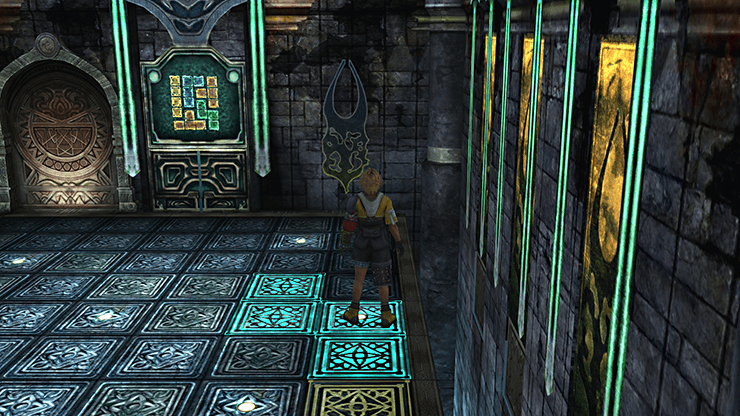 The fourth switch is southwest of the third switch (in between the second and third): 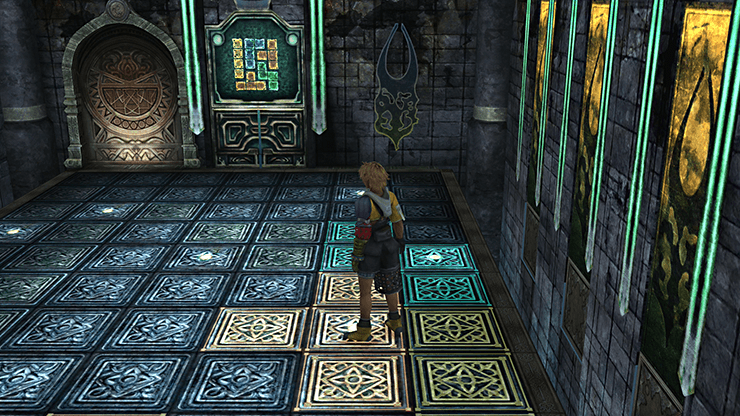 The fifth and final switch is the one furthest northwest: 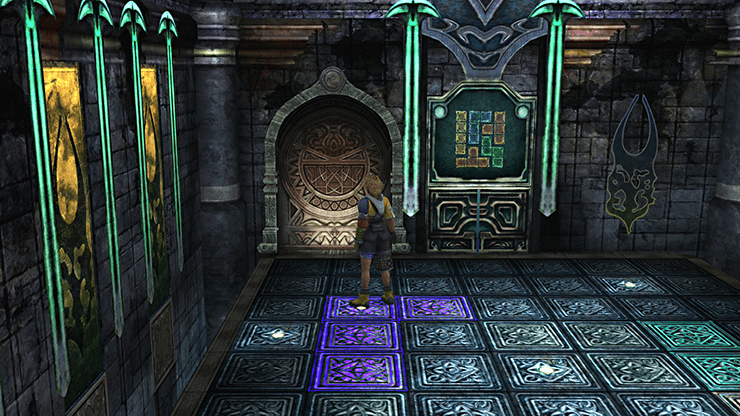 The room will now transform revealing a number of pedestals and a new door will open. You now need to push each of the pedestals back into the wall and complete a corresponding puzzle in the next room (through the passageway at the back of this room).

A total of six pedestals will reveal themselves but there are only puzzles for the top left, top right, bottom left and bottom right pedestals (4 puzzles to complete in total). The two middle pedestals do not move when you push them. 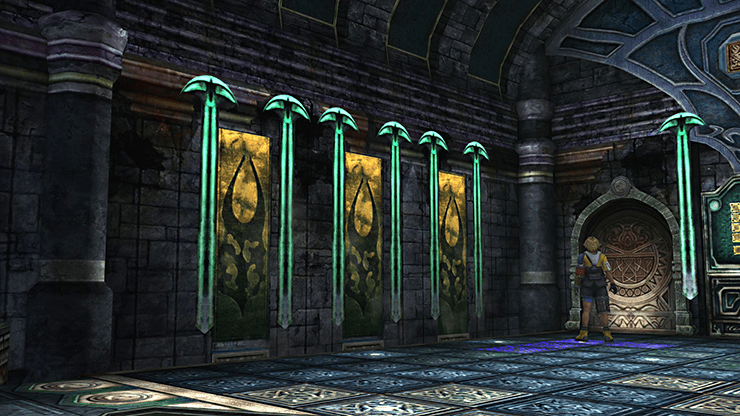 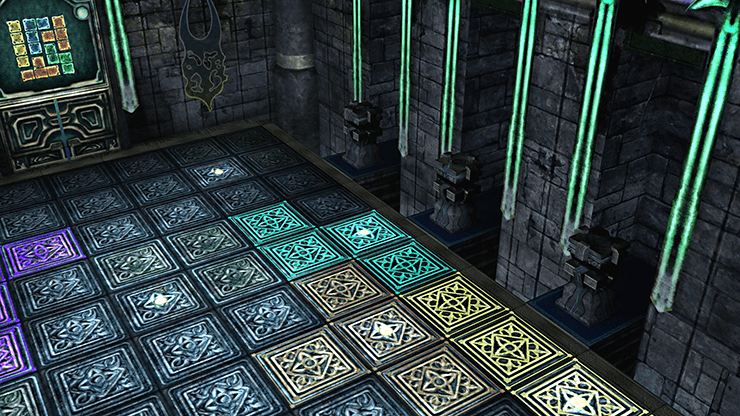 Push each of the pedestals back (by pressing the

Button) and use the corresponding charts below to find out which switches you should step on to match the shapes on the screen at the front of the second room. 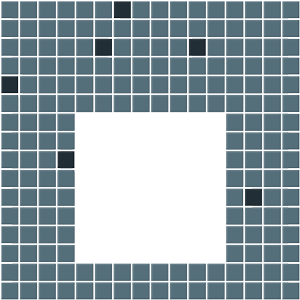 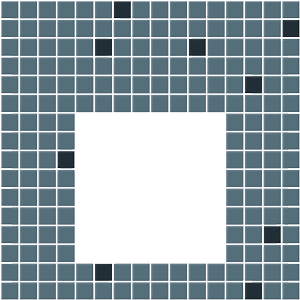 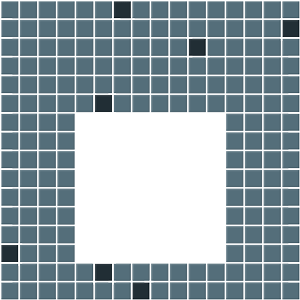 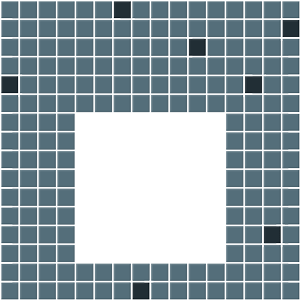 Kilika Sphere out of the recess in the wall near the screen once you have completed the four Tetris-style puzzles. Insert it into the middle pedestal on the left of the previous room (shown in the screenshot below). 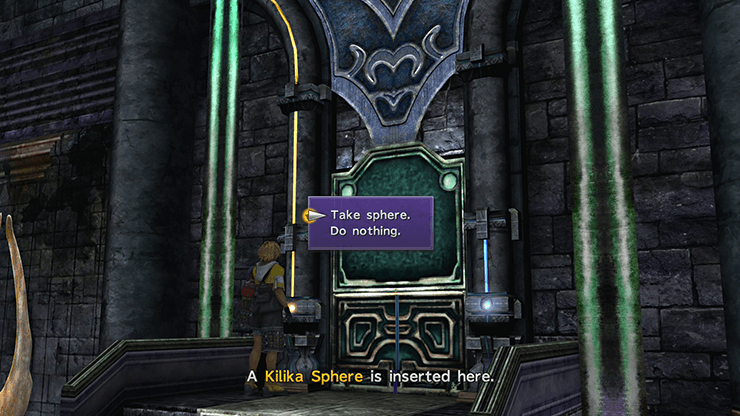 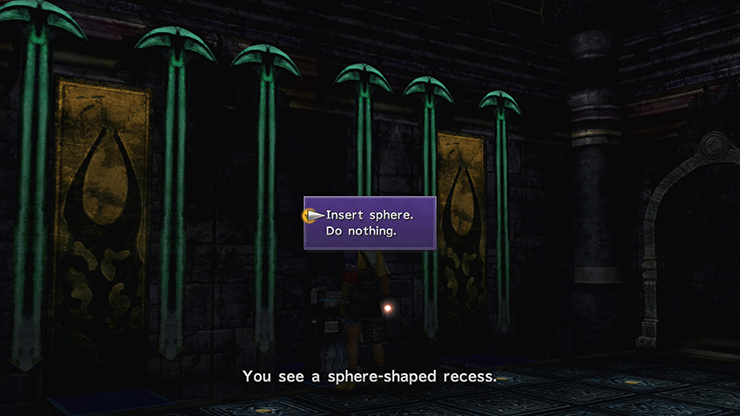 Kilika Sphere and place it into the middle pedestal on the right side. This will cause all six of the symbols in the center of the room to light up. 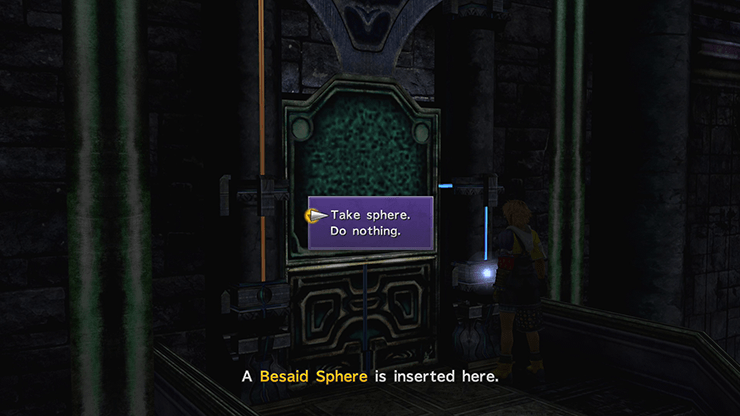 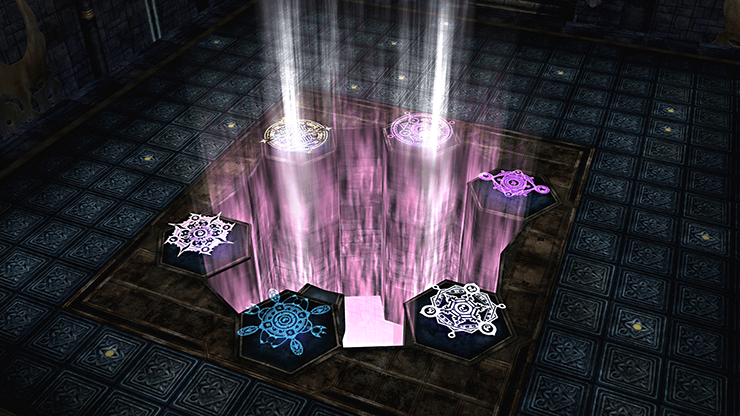 Save your game at the Save Sphere before heading into the next room as there is a boss fight coming up. If you have any armor with the

Berserkproof ability you should equip it before entering the next room. 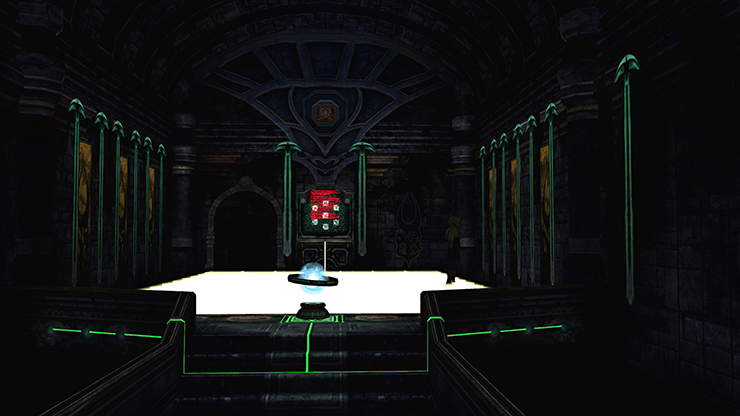 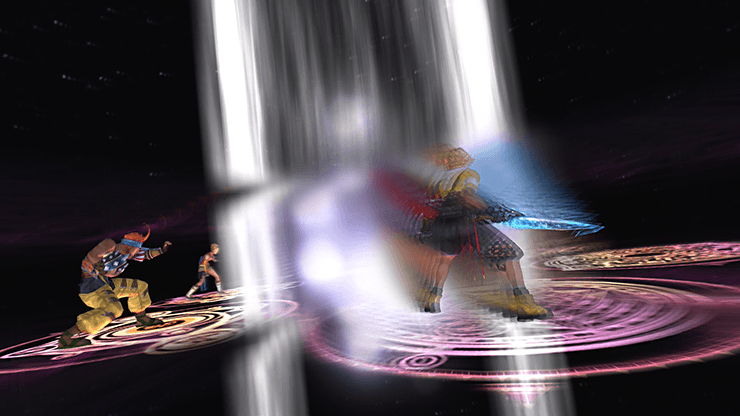 This fight can appear to be daunting as there is an added layer of dealing with team member positioning on the battlefield but the mechanics of the fight are much more straightforward than they appear.

The battlefield is made up of six glyph spaces that characters can stand on. You can use the Trigger Commands to move your characters from one spot to another. Each time you attack Spectral Keeper it will counterattack by swiping at the three spaces directly in front of it. 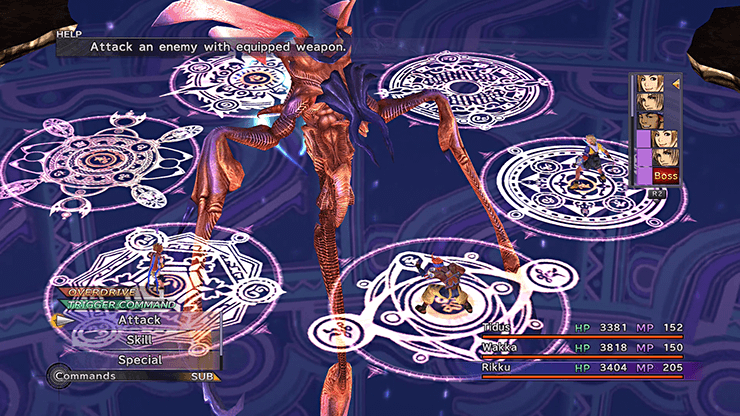 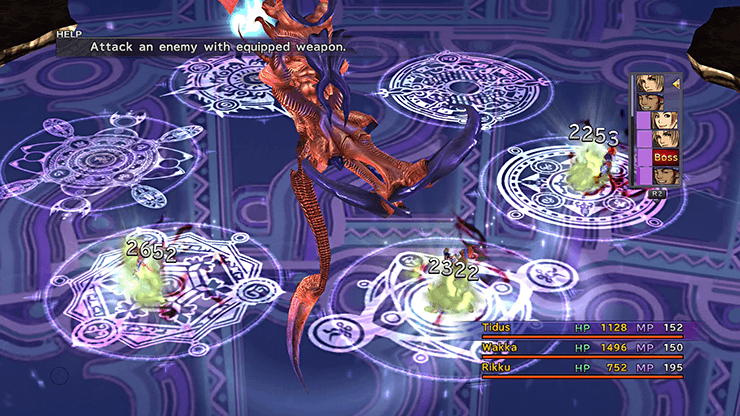 Spectral Keeper can also plant Glyph Mines on any of the spaces which explode on Spectral Keeper’s next turn. Any character that is still standing on a Glyphs space when the Glyph Mine explodes will be instantly killed.

You can see when a Gylph Mine is about to explode by watching the turn counter on the right side of the screen. The turn will be listed as “Boss” with a number over top of it. Make sure to move your character before then.

Finally, Spectral Keeper can attack with its tail which will inflict the Berserk status effect. Berserk causes a character to automatically use the ‘Attack’ command every turn. It also raises that character’s Strength stat, causing their attacks to hit for more, however this status effect should be removed as soon as possible as you need to be able to move your characters around the battle field to stay alive. You don’t want a Berserk afflicted character to attack Spectral Keeper while both of your other two characters are standing in front of it, for instance. 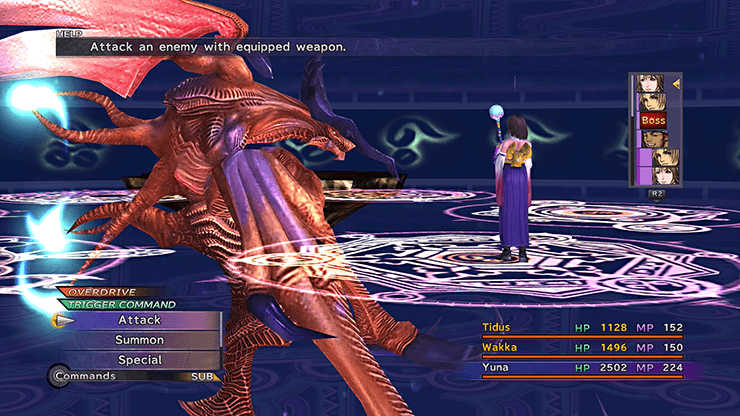 Make sure that your characters stay relatively separated throughout the fight so that as few of them are hit by a counterattack as possible.

Protect if you are having trouble staying alive through regular attacks and use Tidus’ Provoke ability if you need to redirect Spectral Keepers attacks. Keep in mind that you are nearing the end of the game so do not be afraid to use up your

Elixirs during this fight if needed.

This concludes the Zanarkand Cloister of Trials for now. The Destruction Sphere portion cannot be completed until later on in the game. 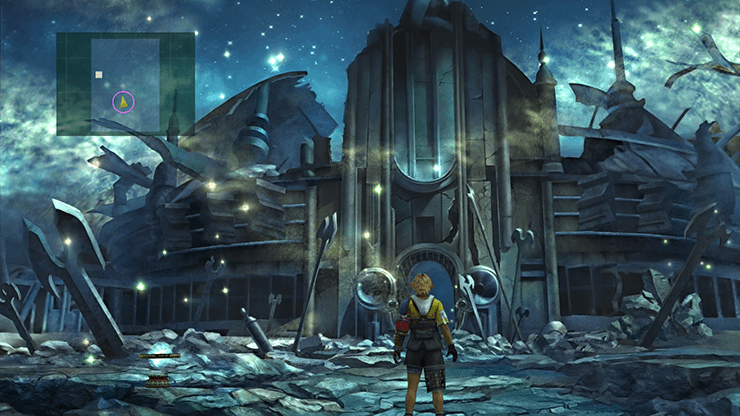 You can only complete the Destruction Sphere portion of the Zanarkand Cloister of Trials by returning to the Zanarkand Ruins later on in the game after you have access to the “NavMap” on the Airship and can return to any location. Check out the Airship and Highbridge walkthrough section for more details.

Use the teleportation platforms to quickly transport yourself from the Airship landing area into the Cloister of Trials. You can find one just south of the Save Sphere that you initially land next to.

Step on all of the switches that light up the 7 white square patterns. 3 of the switches are in the first room (just find them through trial and error) while the other 4 are located in the second larger room. Use the map below to help you find them: 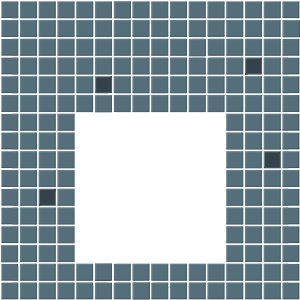 Destruction Sphere out of the pedestal that appears behind that sliding doorway. Return to the larger room and place the

Destruction Sphere into the recess on the right side of the screen at the front of the room. The screen will shatter revealing a treasure chest which contains a 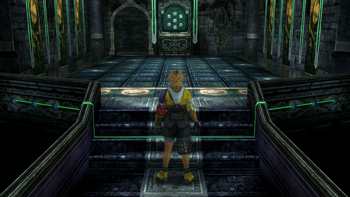 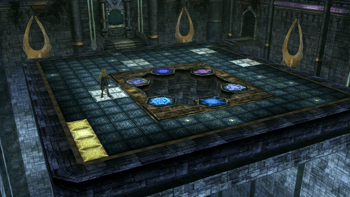 The Zanarkand Cloister of Trials is now 100% complete. Use the link below to return to the Side Quest and End Game walkthrough:

Side Quests and End Game Walkthrough
Detailed instructions for completing each of the side quests in a logical and sequential order.