You start off wandering the streets of Lindblum with just Zidane and Dagger in your party. The very first thing that you should do is equip Dagger with the

Peridot accessory so that she can begin learning her first Eidolon, 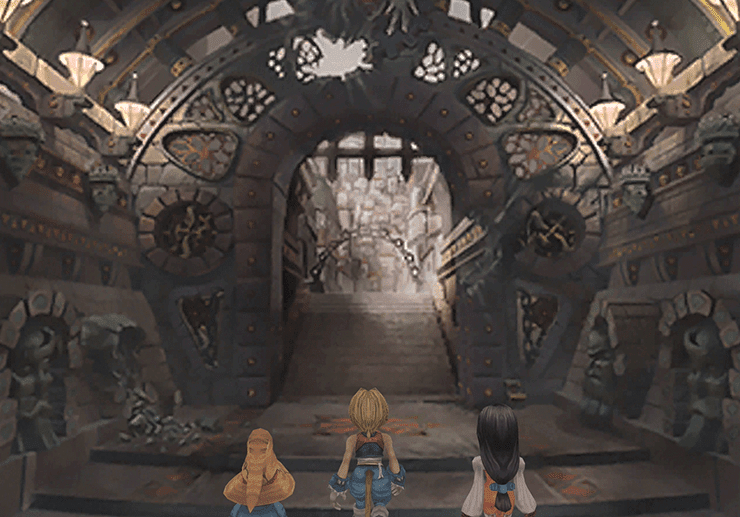 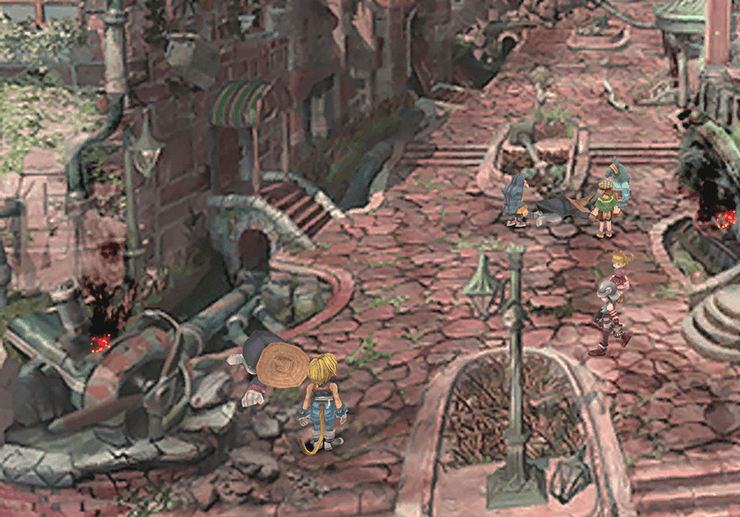 Travel north towards the Shopping Area and Minister Artania will discuss the reconstruction efforts and the location of Regent Cid with Princess Garnet and Zidane. The scene ends with Minister Artania taking the two of them to meet with him up in the castle.

Cid will tell the team that a “weapons dealer” named Kuja is behind the attack and has been supplying Queen Brahne with “magic weapons” (the black mage army). He will provide the team with 3,000 gil before sending them off to find their way to the Outer Continent. 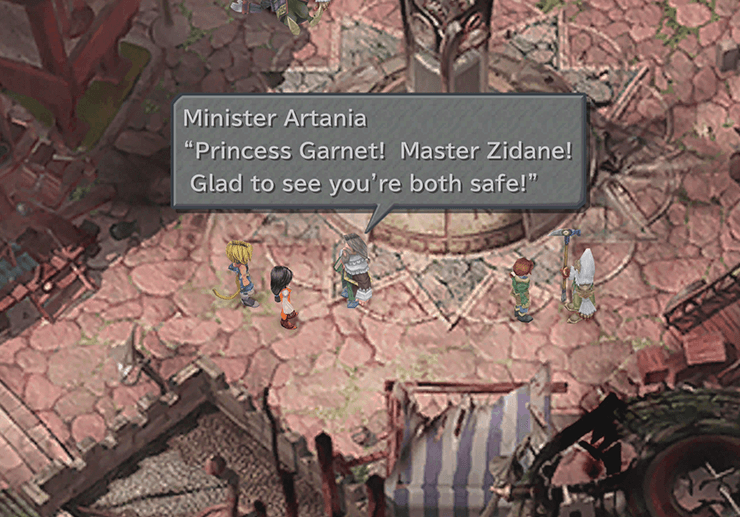 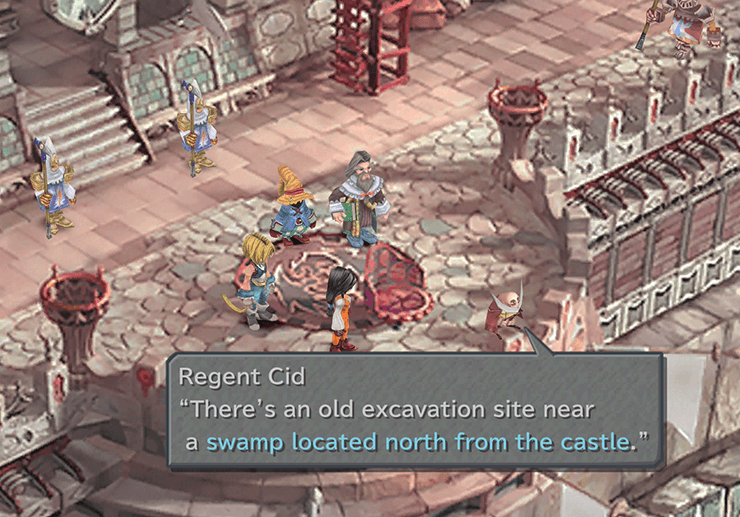 You should do as the “Man” suggests and take some time to stock up in the Square before departing. The Weapon Shop doesn’t sell too much that you should not have already. Speak to Alice outside of her shop though to pick up some consumable items (including

Annoyntments if you don’t have a few already).

The Synthesis Shop sells all kinds of interesting items including:

You should purchase (at minimum) a

Barette for Dagger as this will teach her the

Cura spell and the new weapon for Zidane -

Exploda. You should have the raw materials that you need on hand. 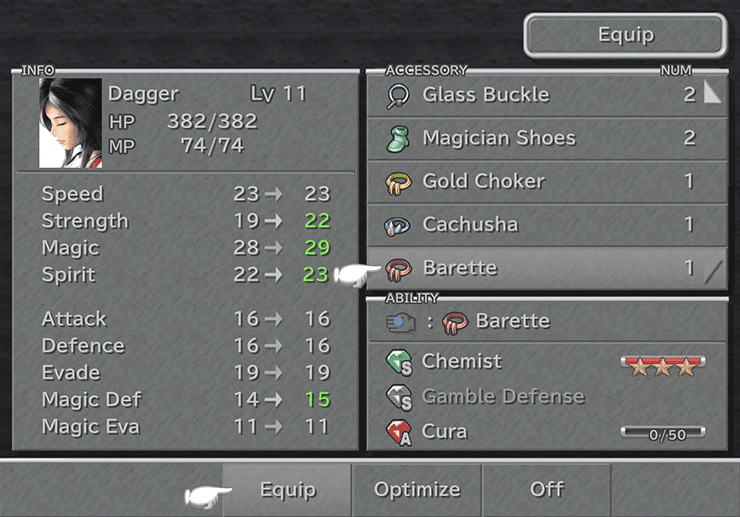 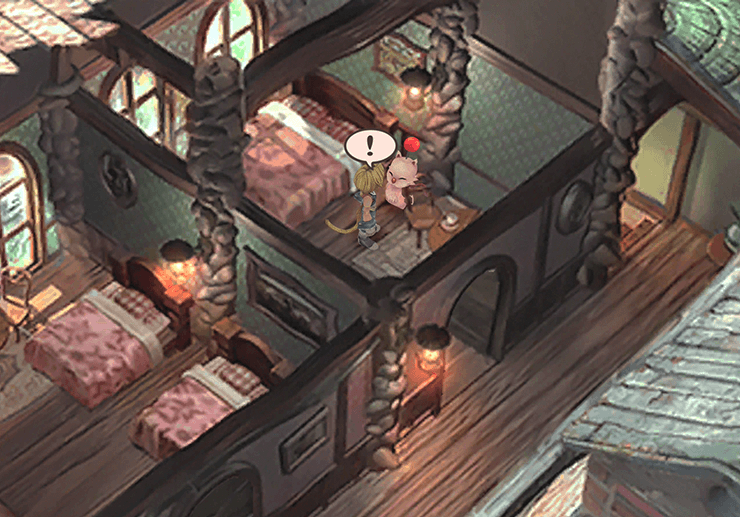 You can speak to the “Man” and tell him that you are ready to go whenever you are finished in Lindblum but there are quite a few things that you can do. Travel into the next area and you will have the opportunity to watch another Active Time Event involving the Alexandrian Soldiers and the Falcon Claw called “The Third Jewel”. This is an optional ATE.

In order to obtain the Movie Critic Trophy you will need to exit the shop square to activate the optional ATE, “The Third Jewel”. Missing this ATE will prevent you from obtaining the trophy.

There are two treasure chests at the top of the residence of Card Freak Gon (which you can access from the Shopping Area). One chest contains an

Ether and the other contains a

The alleyway leading to the church has been blocked off by debris and rubble, but search near the blocked off pathway to find a hidden

Lindblum Card. You should also stop by the Inn to deliver Serino’s letter to Mooden the Moogle and pick up another letter for Moonte. Head over to the Business District Station and ride to Theater District (which is the only option available at this point). 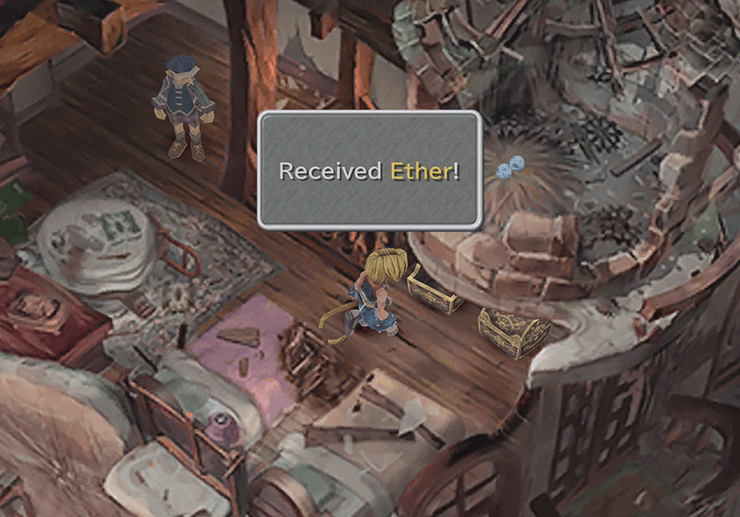 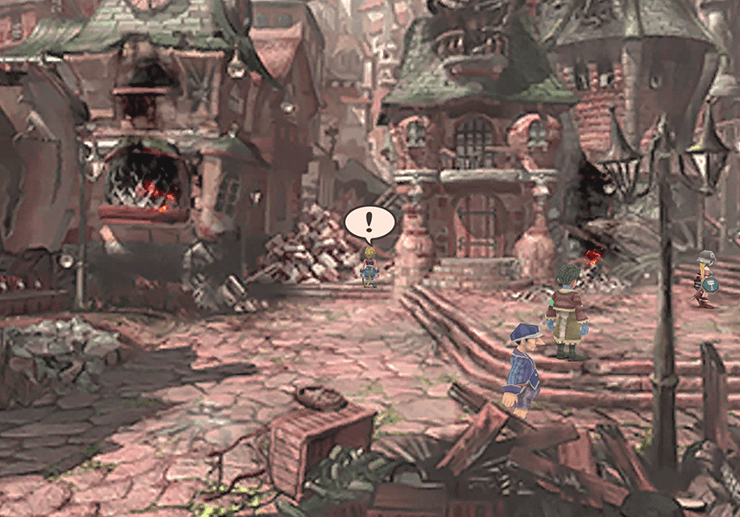 Ore. Walk down the stairs towards the Tantalus hideout and explore within the hideout to find three treasure chests which each contain gil (993 gil, 262 gil and 340 gil respectively).

Speak to Lowell who is standing just outside of the Tantalus hideout and suggest that he move to Alexandria to work in their theater. Travel back to the Business District and speak to the “Man” when you are done (who can be found near the shops). Another Active Time Event (“Brahne’s Fleet Arrives”) will play automatically. 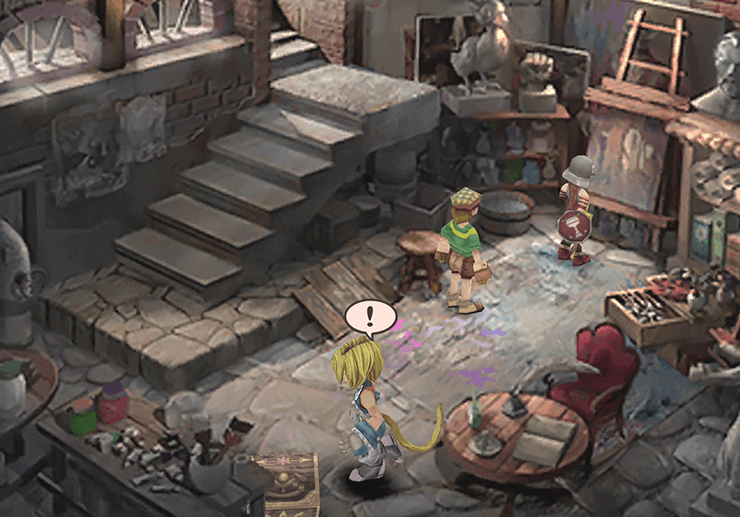 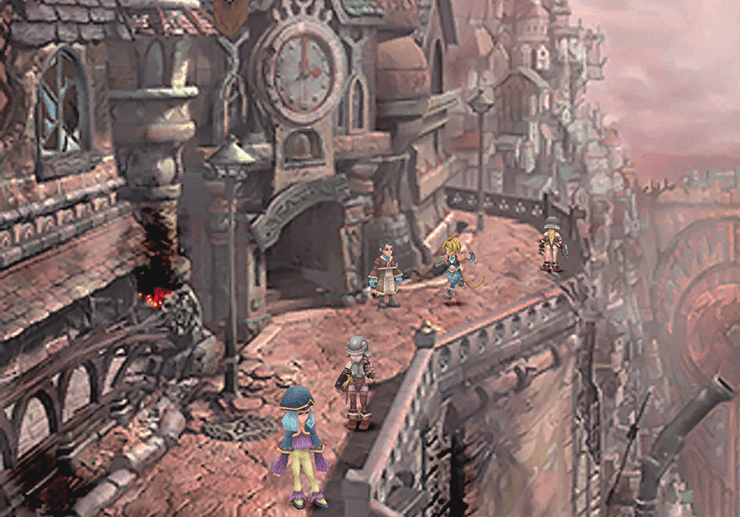 The story continues with Zidane and Dagger sneaking into the castle and meeting up with Regent Cid at the Base Level where Cid arranges for an easy escape for the team. There is one more quick Active Time Event called “<Gwok-gwok!> How Infuriating!” involving the Alexandrian Soldiers waiting for the trains to arrive.

Speak to Moonte once you reach the Dragon’s Gate and give him the letter from Moodon. Search in the corner to find a treasure chest that contains a

Bandana. Speak to the Merchant as well if you need to stock up on any items and then exit through the gate. 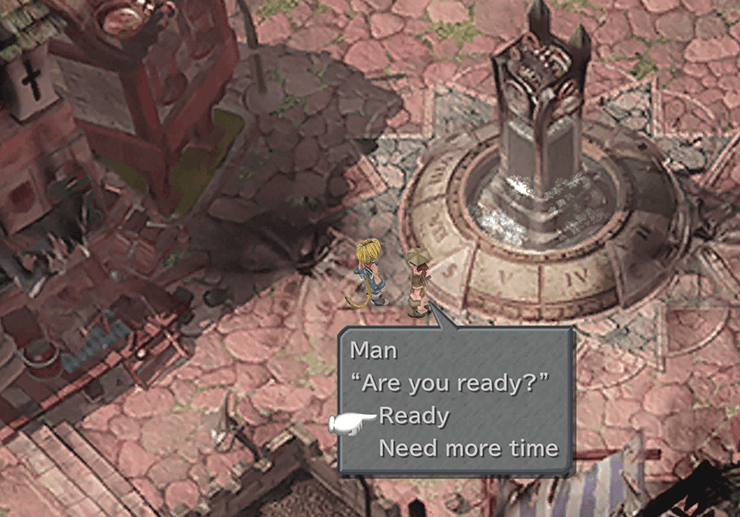 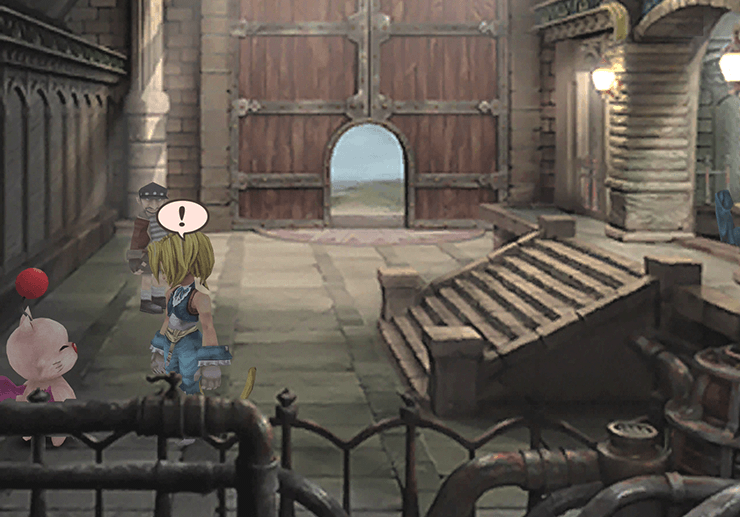 There are a couple of side quests that you can do at this point. You can return to Moguta in Gizamaluke’s Grotto to trade in a Kupo Nut for a random item. Check out the Kupo Nut side quest section for more information.

Travel directly to Qu’s Marsh so that you can pick up Quina who disappeared during the final events in Cleyra (deciding not to follow the team through the portal). If you skipped out and did not go to Qu’s Marsh on Disc 1 this would be the next point in the game where you can get Quina to join the team. Use the map and the screenshot below to help you locate and identify Qu’s Marsh. 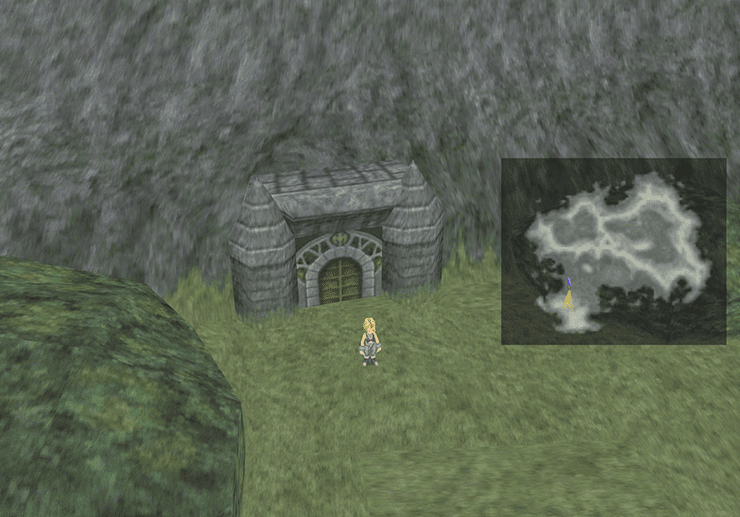 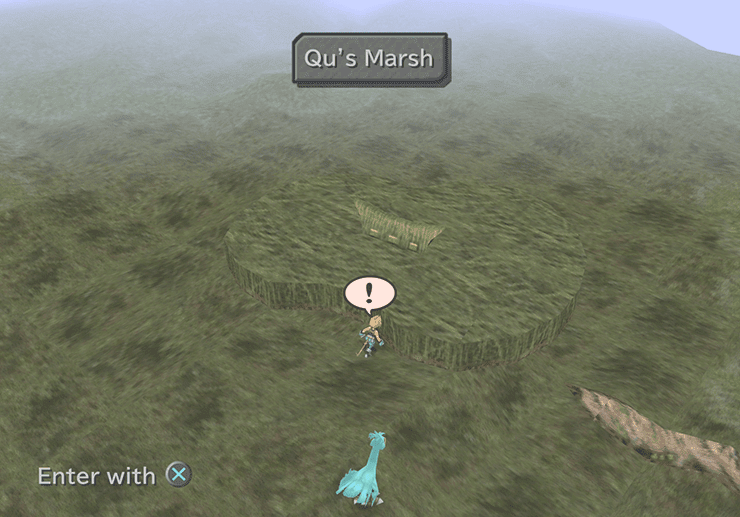 If you picked up Quina during the previous pass through Qu’s Marsh you won’t have to watch any of the introductory scenes, but you will have to go through them if this is your first meeting with this character. Quina is no longer an optional character at this point and you will be forced to allow him/her to join your party.

You should take this opportunity to do some Frog Catching as well - part of the Frog Catching side quest which can earn you some great items later on in the game. Click on the link for more information. 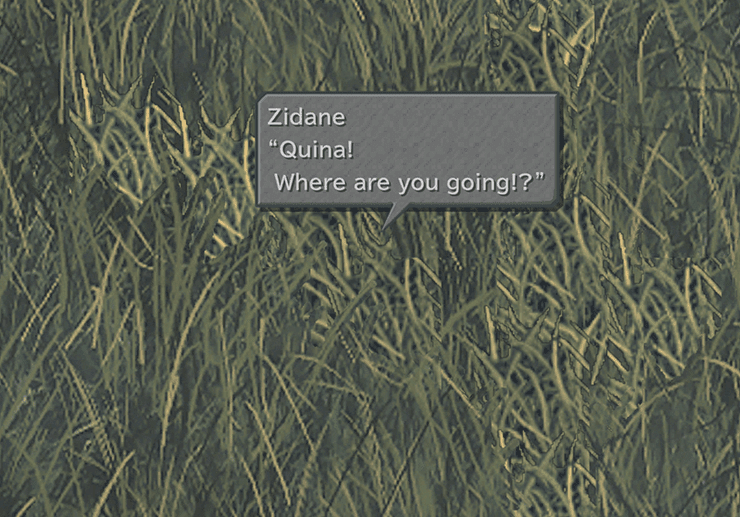 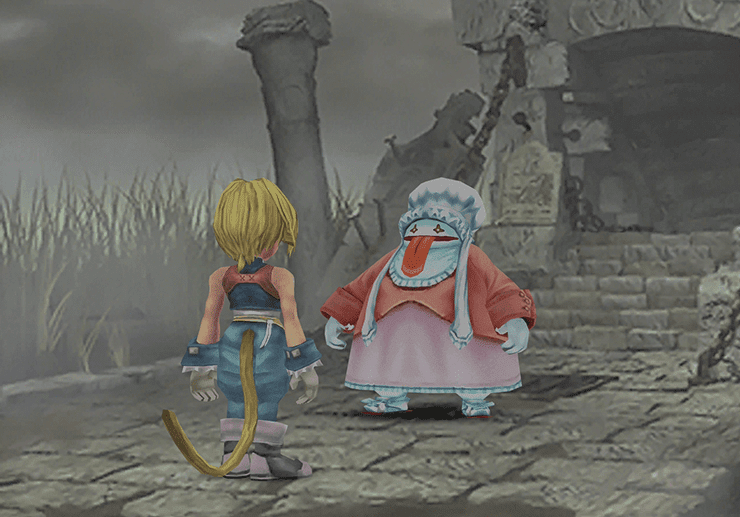 Travel back to the Master’s House and speak to Quale regarding the Excavation Site (although this is not mandatory). Quale will tell you that there are some secrets hidden in some brush. That’s all that you need to know!

Make your way to the right side of Master’s House to initiate a scene involving Quina where Quina will wander off into the swamp leading the way to the entrance to the Excavation Site. Travel through the entrance and down the stairs which leads directly into Fossil Roo.