As mentioned on the previous page, there are a number of side quest items that you can take care of before heading straight to Death Mountain. For starters, play the Sun’s Song in Kokiri Forest to change it to night time. The house on the southwest side of the Kokiri Forest (with the two twin tree stumps on the roof) has a

Gold Skulltula hanging from one of the stumps that only appears at night. Use the

Hookshot to destroy it and obtain another token (number 60 of 100). 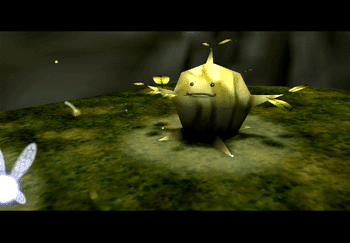 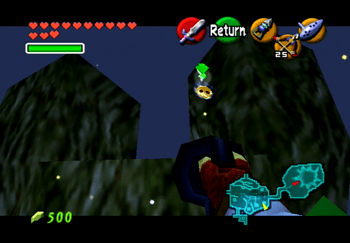 Return to Hyrule Castle and back into the Temple of Time. Enter the rear anti-chamber to find Sheik standing near the pedestal. Sheik will explain that there are other sages that need your help and will explain that you will need the ability to travel through time in order to complete your mission. You can now return the

Master Sword to the Pedestal of Time at any time to travel back in time 7 years ago and become young Link once again. 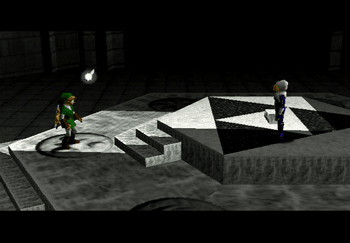 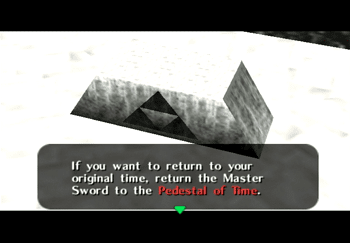 Sheik will also teach you your next melody on the

Ocarina of Time. The song, called the Prelude of Light, can be used to warp you to the Temple of Time whenever you would like. 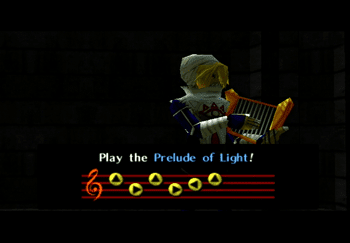 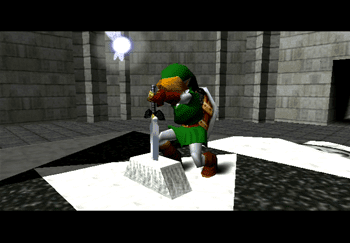 Now that you can return to Hyrule seven years in the past you can use this opportunity to go back and complete any of the side quest items that you may have missed, such as any of the Heart Pieces,

Gold Skulltula, or even missing the first encounter with the Scarecrow if you need to, or if you somehow missed obtaining Epona’s Song at the Lon Lon Ranch.

There are a few additional things that you can do now even if you have been following this guide all the way through though, so place the

Master Sword back into the Pedestal of Time and become Young Link once again.

Now that you have the learned the Song of Storms there is another Gold Skulltula that you can obtain near the castle. Travel along the secret pathway, between the guards and into the moat once more. Play the Song of Storms near the tree in the corner to reveal a secret cave. Jump into the cave to find a number of stone walls that can be destroyed by Bombs. Destroying one of the stone walls will reveal a 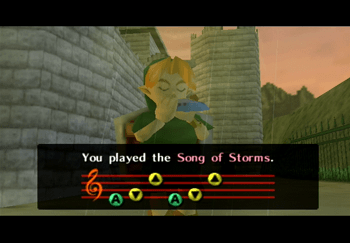 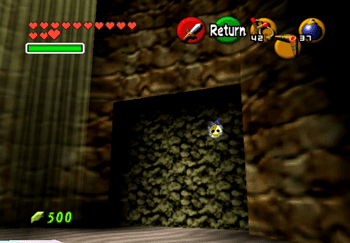 You can now complete another dungeon as Young Link referred to as the Bottom of the Well. It should be noted that completing this dungeon is not required yet at this stage of the game but will be required later on – may as well complete it now since you can, but you can leave it until later on if you prefer.

Bottom of the Well
Completing a dungeon as young Link in order to obtain the Lens of Truth. This dungeon can be completed any time after Link has completed the Fire Temple. 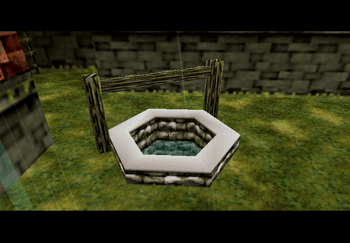 There are still a number of things to complete as young Link. Travel back up the Death Mountain Trail and go back into Goron City. Take a right after you enter the city and go down the stairs to reach the room full of lava. You will now recognize the two blue blocks sitting in the lava. Stand near the edge of the lava pit and play the Song of Time. This will cause the blue block to disappear. That is all that you can do in Goron City for now. 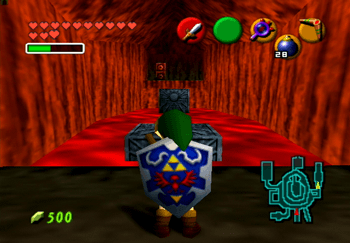 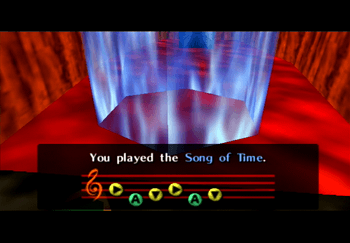 Travel back to Zora’s River. You can walk there but there is actually a short cut that you can use to get there much faster. Go through the secret passageway that was blocked by boulders that leads into the Lost Woods. It’s the one with the four Bomb Flowers along the pathway shown in the screenshot below. Take the first left in the Lost Woods which will lead to a small pond (again, shown in the screenshot below). Dive down and into the hole to be teleported to Zora’s River. 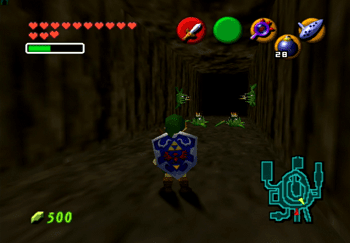 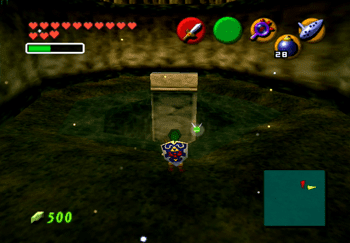 Travel back down Zora’s River until you reach the log with the frogs on it and speak to them:

Heart Piece (Zora’s River)
Playing the Ocarina of Time songs to the frogs in the river to obtain another Piece of Heart. 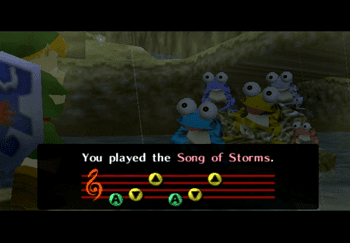 Return to Hyrule Market and there is another Heart Piece that you can obtain now that you have the Lens of Truth. Play the Prelude of Light on your

Ocarina of Time to warp to the Temple of Time and get there quickly. 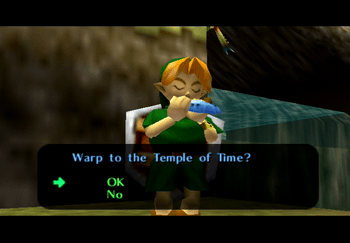 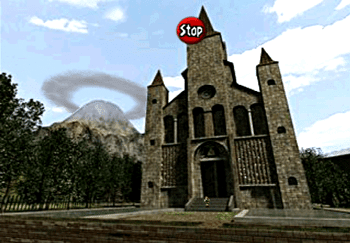 Make sure that it is night time and then enter the Market. Use the Sun’s Song to speedily change the time of day. Go through the doorway on the southwest side of the Market to enter the Treasure Box Shop to obtain another Heart Piece:

Heart Piece (Hyrule Market)
Use the Lens of Truth to cheat in the Treasure Shop Box mini-game. 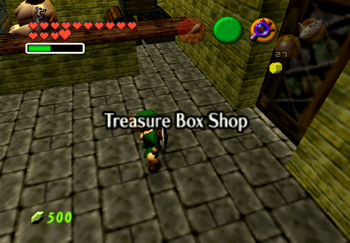 This is pretty much everything that you can complete as young Link. Return to the Temple of Time and pull the

Master Sword out again to travel seven years into the future and become adult Link again. 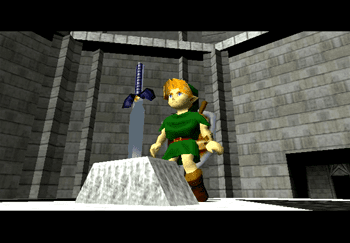 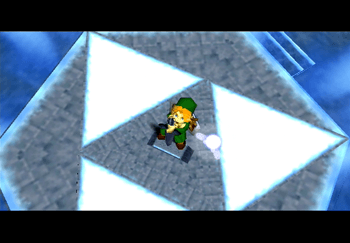 The next quest that you can complete is to obtain the fourth and final Bottle. Check out the side quest information below:

Bottle (Ghost Shop)
Use the Lens of Truth to cheat in the Treasure Shop Box mini-game.

You can also take this opportunity to travel to Gerudo Valley to complete another part of the Biggoron’s Sword side quest. Use Epona to jump across the gorge (or

Hookshot across) and give the Poacher’s Saw to the Master Carpenter standing outside of the tent. He will trade you the Poacher’s Saw for the Broken Goron’s Sword and will suggest that you visit Biggoron to get it repaired. The next steps of the side quest cannot be completed though until after you have completed the Ice Cavern dungeon later in the game. 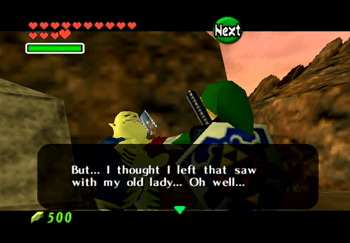 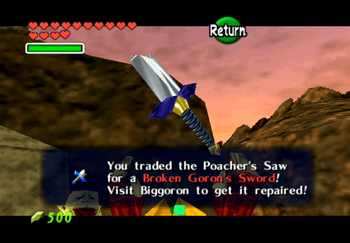 Travel back to the village. The first thing that you will want to do is complete the new Shooting Gallery side quest. The Shooting Gallery has been rebuilt and moved from Hyrule Castle Market. It now resides in the red brick building that the carpenters were building when Link was young. 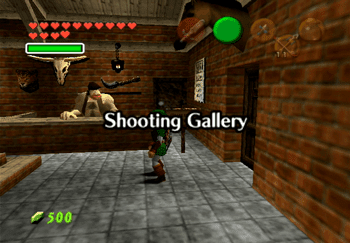 Make sure to stop by the House of Skulltula if you have not claimed any of the most recent rewards. Lastly, make your way up the Death Mountain Trail towards Goron City.

The City has now been completely deserted save for one lonely Goron who can be seen rolling around the mid-level. Drop a Bomb in front of the Goron as it is rolling past to stop it. You can use the Bomb Flowers on the south side if you are out of regular Bombs. Aim the Bombs so that the Goron runs over them – it will spin around and start going the opposite direction if your Bomb blows up too far away. 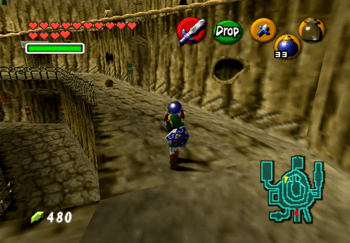 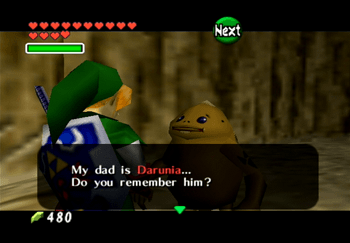 Speak to the young Goron (who calls himself “Link”, or whatever you named your character). “Link” will explain that Darunia went to the Fire Temple to rescue the rest of the Gorons and that there is a dragon inside. Ask him about the dragon to hear about Volvagia and the huge hammer that was used to destroy it according to Goron legend. 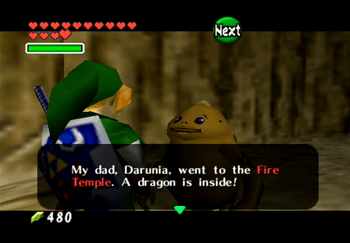 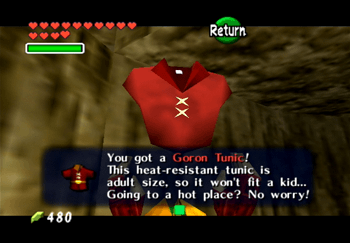 Goron Tunic. The Goron Tunic is heat-resistant and will Link to enter the Death Mountain Crater. Two of the doorways that were previously locked will now open up. One leads back to the Goron Shop where you can purchase Recovery Hearts, Red Potions, a replacement

Start off by equipping your new 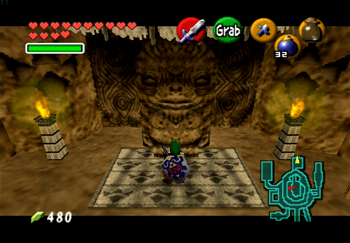 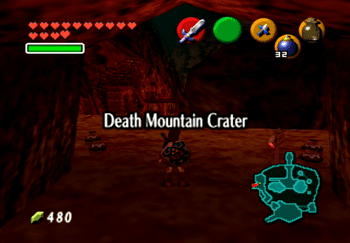