Link can obtain the Big Bullet Bag as soon as he exits the Kokiri Forest for the first time into Hyrule Field. Turn around and reenter the Kokiri Forest and head to the Lost Woods – the northern most exit up the vines to the upper pathway.

Take the first path to the right leading to the area in the screenshot shown below. Use Link’s

Fairy Slingshot to hit the center target three times in a row. The center target will award him “100 points” when it is hit correctly. Do so successfully and a Deku Scrub will appear from the top of the tree and award Link with the Big Bullet Bag as a present. 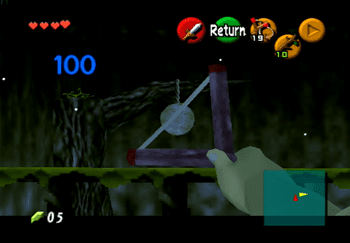 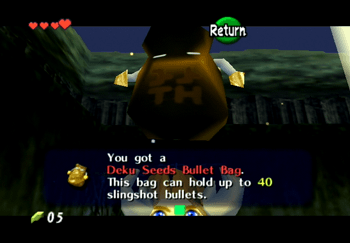 Note that Link requires 40 rupees in order to purchase the Deku Stick when prompted. Stock up on rupees before proceeding.

Head back to the Lost Woods and take the first left from the entrance. Link will find a Skull Kid standing atop a tree trunk with a flute. Travel through the pathway on the left side of the screen and then walk under the bridge (which is the same one that was used to exit Kokiri Forest out into Hyrule Field). On the other side of this forested area there will be a Deku Scrub. Use Link’s Deku Shield to reflect a Deku Nut back at it and then speak to the Scrub. 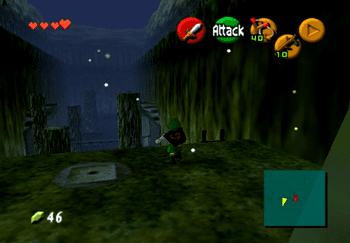 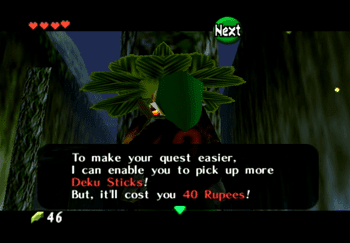 This will allow Link to carry 20 Deku Sticks instead of 10.

The Biggest Bullet Bag can be won as a prize at the Shooting Gallery in the Market. The Shooting Gallery is the building with the target on the sign above the doorway. Each game costs 20 rupees to play. Return to the guard house if Link’s rupee supply is depleted. Hit at least 8 targets though and you get another game for free.

Some tips for successfully hitting all 10 targets:
- The rupees obviously follow the same pattern every single attempt so memorize the pattern.
- Avoid moving the control stick up or down. If you aim for the middle of the screen you can hit all of the rupees as they enter the screen which allows you to focus on left and right movements.
- They give you more shots than you need to successfully complete the game, so don’t worry about being a one-shot wonder. Use extra shots at the moving targets to increase your chance of success – as long as you don’t run out. 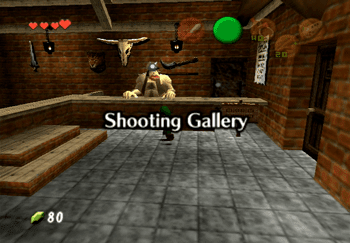 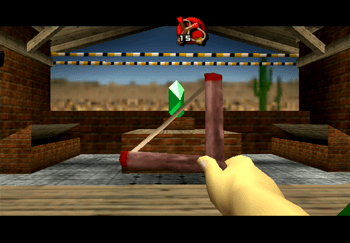 The reward for completing the mini-game and hitting all of the rupee targets is a Bullet Bag that holds 50 Deku Seeds, even bigger than the one that Link obtained from the Lost Woods.

Link can obtain the Big Bomb Bag as soon as the Dodongo’s Cavern has been completed. You may have noticed a large Goron rolling around one of the floors of Goron City. Link has to stand on the north side of his path and wait for him to roll through his “home”. Ambush him with a Bomb back there and he will give Link the Big Bomb Bag which holds 30 Bombs. 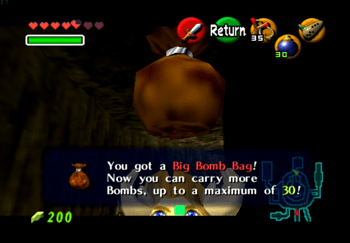 The Bombchu Bowling Alley mini-game becomes available as soon as you have completed the Dodongo’s Cavern dungeon and obtained the Goron’s Ruby. Head back to Hyrule Castle Market to find it. There are two prizes that you can win – a Bomb Bag Upgrade and a Heart Piece.

The Bombchu Bowling Alley rules are straightforward. Aim the Bombchu and release it and the Bombchu will travel in a straight line towards wherever you aim it.

- The first target you can aim straight for.
- The second target is straight again but you have to dodge the spikes and the chicken. Make sure both are out of the way before you launch the Bombchu.
- There is a trick that you can use to hit the third target. Stand on the third black line from the left and aim straight forward. The only caveat is that you have to make sure the large Cucco is out of the way. The indentation in the bowling lane will redirect the Bombchu straight to the target. 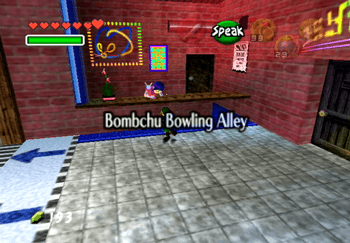 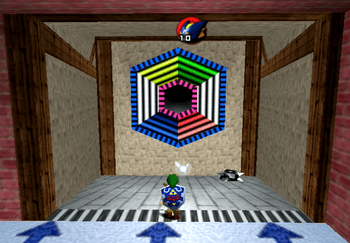 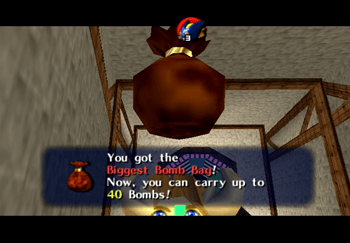 The Golden Scale will allow you to dive deeper than the Silver Scale that Link picks up during his travels through Zora’s Domain. Travel to the Fishing Pond as adult Link (after the Temple of Time scene) and fish until you’re able to catch a 15 pound (or heavier) fish to receive the Golden Scale as a reward. 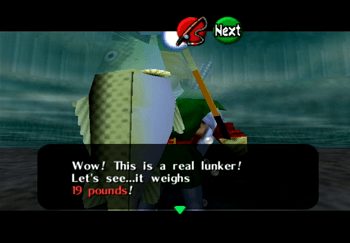 Fairy Bow. Enter the Shooting Gallery which is located in the large, red brick building in the center of town. You can play the shooting game for 20 Rupees per play. This shooting game is exactly like the previous one except that you’ll be shooting the bow instead of the slingshot. The Rupee targets move a lot faster and come out in a random order but your arrows also shoot much faster.

One tip for completing the shooting game is to try and keep your bow level along the vertical axis and move your aim from left to right to keep steady. All of the Rupee targets can be hit from the same horizontal axis as long as you are level. 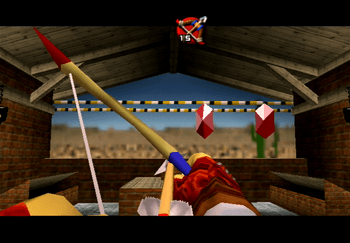 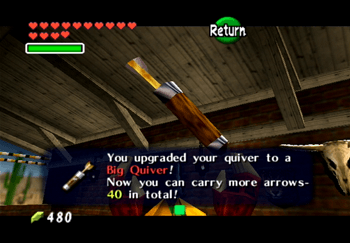 Head to the east behind the Thieves Hideout in the Gerudo Valley after you have completed the Gerudo Fortress and obtained the Gerudo’s Membership Card. Speak to the Gerudo wearing white under the tent while riding Epona to initiate the Horseback Archery mini-game. You do not have to control Epona while she runs so focus on hitting the targets. The large pots are worth 100 points and the targets are worth 30 points on the outside, 60 points in the middle and 100 points if you hit them dead center. The best tactic is to set yourself up and hit all of the pots as you go past the first time. Use the video below to help guide you:

Obtain 1500 points to receive the Biggest Quiver as a reward.