The Legend of Zelda: Majora’s Mask

The Legend of Zelda: Ocarina of Time follows the story of the main character, Link, as he travels through the kingdom of Hyrule. This game was the first in the Legend of Zelda series to be fully 3D and involved Link traveling back and forth through time to work though the puzzles in the game. 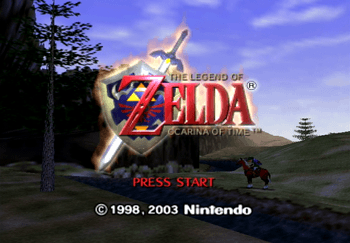 The game was very well received and is one of the top selling games on the Nintendo 64. Ocarina of Time is still one of my favorite video games as it lead the way for many of the innovative features that are found in more modern Legend of Zelda titles. This is why the game continues to be released for Nintendo’s newest systems, including the Wii and the Nintendo DS/3DS.

This section of the site features a full walkthrough of the game and the side quests. 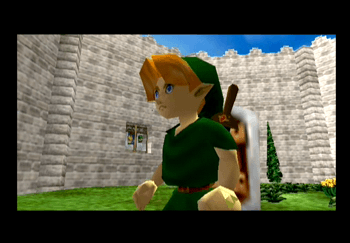 Let’s get this out of the way right off the bat - The Legend of Zelda: Ocarina of Time is one of, if not, the greatest game ever made. It is consistently ranked one of the highest games on nearly all “Top Games” lists including those created by IGN and through polls conducted by GameFaqs. It’s impact on the gaming world, and across multiple genres of games, continues to be felt. And while it is not without its flaws, Ocarina of Time is a masterpiece of a title that every gamer should play. So what is it that made the game such a resounding success?

For starters, Ocarina of Time was able to reach an extremely wide audience, accessible to both casual and hardcore gamers and released on the Nintendo 64, one of the most popular gaming systems of at the time (just behind the Sony PlayStation). The story is very easy to follow and the game was not as difficult as some of the previous Legend of Zelda titles (such as the original Legend of Zelda and Zelda II: The Adventure of Link). 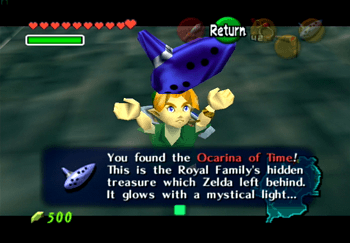 The game is set to an excellent soundtrack composed by Koji Kondo. Koji Kondo was responsible for nearly all of the music up to this point the the Legend of Zelda series as well as a host of other Nintendo franchises. Ocarina of Time presented a unique opportunity for Kondo to incorporate Ocarina of Time songs that Link learns throughout the game into the overarching soundtrack. The soundtrack is quite robust considering the limitations presented by having to tie each of the songs back to the notes that can be played by the Ocarina.

Generally speaking, the levels, scenery and music are all top notch, with a few notable exceptions. The music is a little lackluster in a few of the dungeons, namely the Inside the Great Deku Tree dungeon and the Water Temple. The Water Temple also stands out as one of the more poorly designed and frustrating experiences in the game. The difficulty stems from Link being required to equip and unequip the Iron Boots over and over again by going through the Menu Screen. The confusing layout of the Water Temple requires first time players to do a lot of exploring through different levels drastically increasing the amount of time required to complete the dungeon. 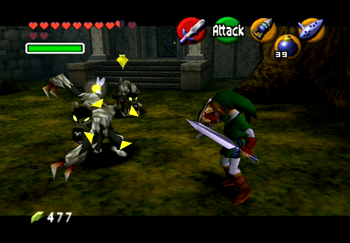 Other frustrating areas of the game include Navi and the Owl constantly interrupting the flow the game (Hey! Listen!) and the lack of true endgame content. The game designers seem to have made it half way there - they added in the Gold Skulltula side quest for those that wished to venture back across the lands of Hyrule to complete the side quest, however they failed to include a reward worthy of spending that additional time; the reward for obtaining all 100 Gold Skulltulas is an endless supply of Rupees. The problem is that towards the end of the game there is no longer a need for any Rupees at all.

Many of these issues have been fully resolved in newer titles in the Legend of Zelda series. For example, the rewards for completing side quests in later games are much more rewarding (there is nothing more fun than completing the final fight in Majora’s Mask as Omni-Link with the Fierce Deity’s Mask). Side kicks later on in the series, such as Tatl and Midna, are much less intrusive to the flow of the game and offer much more helpful advice as you progress through the game. 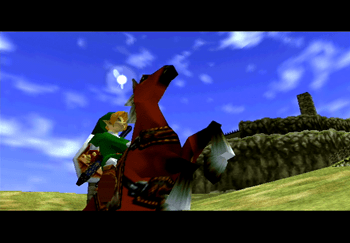 It is important to mention many of the other features which became mainstays of video games in general including the introduction of a targeting system for facing enemies in battle - Z or L Targeting. Context Sensitive Buttons (modifying the C Buttons to activate whichever items Link requires) were also a relatively new feature back in 1998. Legend of Zelda: Ocarina of Time broke ground with a number of these features and their continued use in video games today helps to speaks to how ahead of its time Ocarina of Time was.

The Legend of Zelda: Ocarina of Time is without a doubt one of the greatest games ever created. Gamers who have not played it should definitely give it a try (the graphics have aged quite well and newer Nintendo systems have retro releases so you can find it on the Wii and WiiU!) and those who have played it in the past should pull out and dust off their copy to give it another playthrough. Enjoy the game and enjoy the strategy guide! 10/10.