There are a number of ATEs that you need to watch in Madain Sari in order to obtain the Movie Critic Trophy. Unfortunately, some of these ATEs are easy to miss. Make sure you save your game outside of Madain Sari so that you can reset and retry if you end up missing any.

There are quite a few lines of dialogue when you first enter the village with Zidane and Dagger getting to know their new team member, Eiko. At the end of the back-and-forth you can access another Active Time Event (ATE) called “Vivi’s Feelings”. 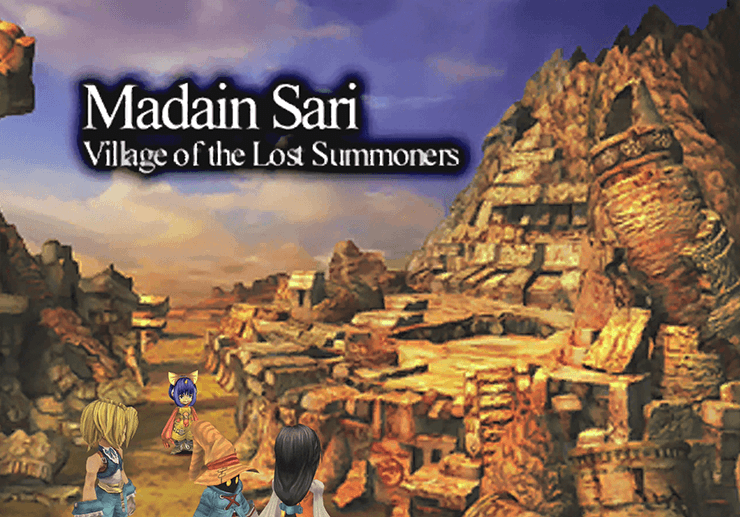 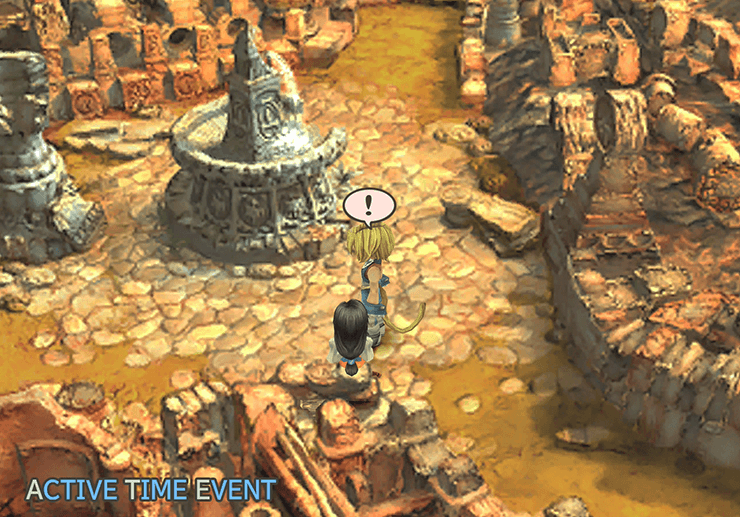 Explore the area behind the fountain to find the Libra Stellazzio which is part of the Stellazzio side quest.

You will have to watch another few Active Time Events including “Dagger’s Feelings” and “Eiko’s Feelings”. Eiko is going to attempt to make food for the team. Halfway through the ATE you will be given the option of choosing which Moogle is responsible for each task.

The affect of selecting the best Moogle combination does not impact any of the items you receive, but does impact the outcome of the story. Choose the following in order to help Eiko cook the best meal: 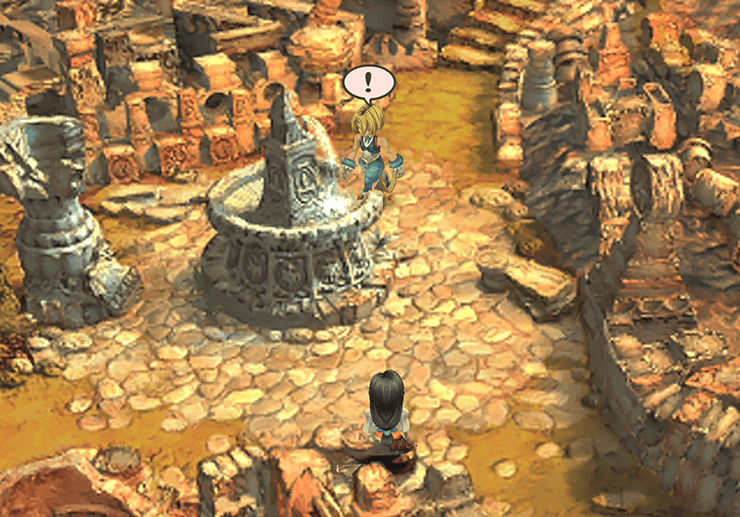 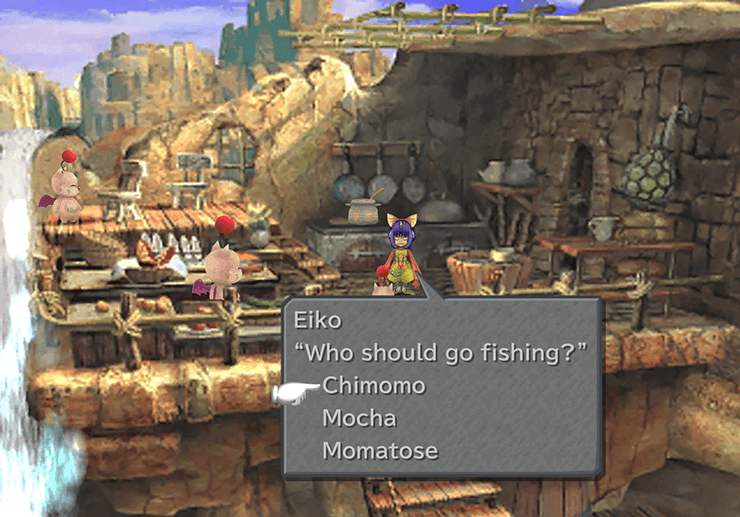 There is a treasure chest sitting behind Dagger that contains a

Tent. Travel to the left of the fountain to find Vivi contemplating near the edge of the walkway. You will get access to an Active Time Event called “Dagger’s Feelings” when you head this direction.

Try to enter the doorway to the left of Vivi and you will be interrupted by a Moogle who insists that you follow it to the Eidolon Wall. You will have access to another Active Time Event along the way called “Eiko’s Kitchen”.

- “Um… How many people do I need to account for, Kupo?” 11 people
- “Should I put in that oglop I found on the Conde Petie Mountain Path?” No
- “Are you okay!?” Let Chimomo cook, and lend a hand 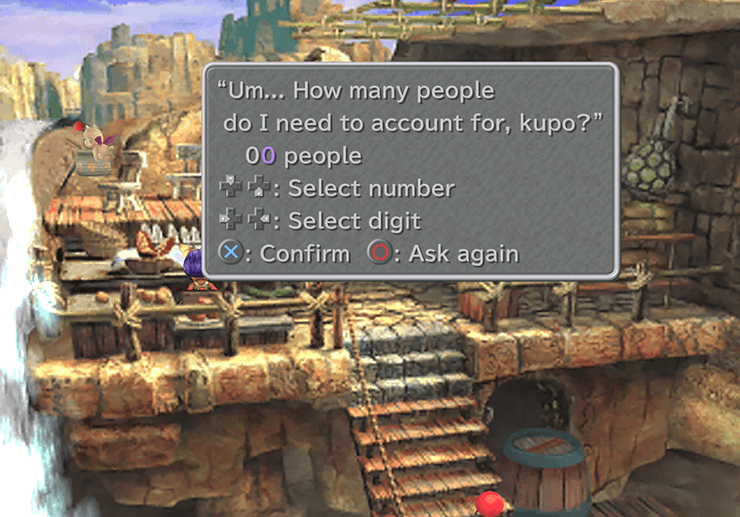 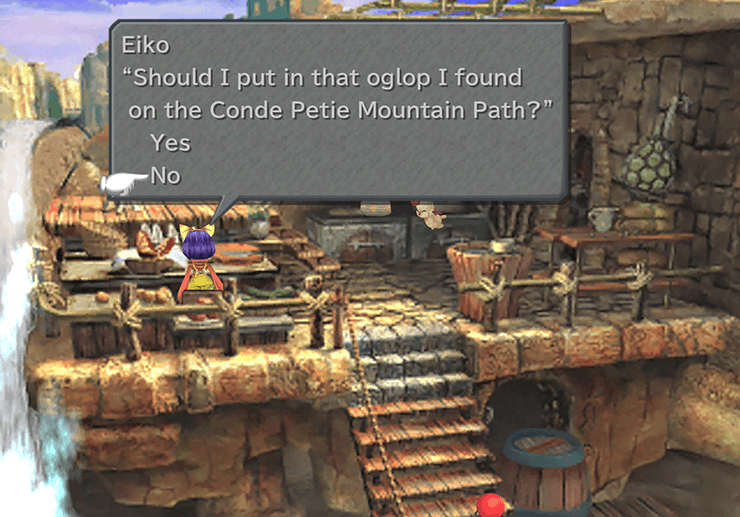 Quina will be pulled out of the water and will assist with the remaining preparations. Follow the Moogle, Moco, down the pathway towards the Eidolon Wall for some more dialogue. Go back to the square and back towards the entrance to Madain Sari to find Dagger staring off into the distance.

Take Dagger with you back to the Eidolon Wall and speak to Morrison (the Moogle) again. Exit the area after Dagger asks to continue looking at the paintings of the Eidolons. You will get access to yet another Active Time Event, “Eiko’s Kitchen 2”. 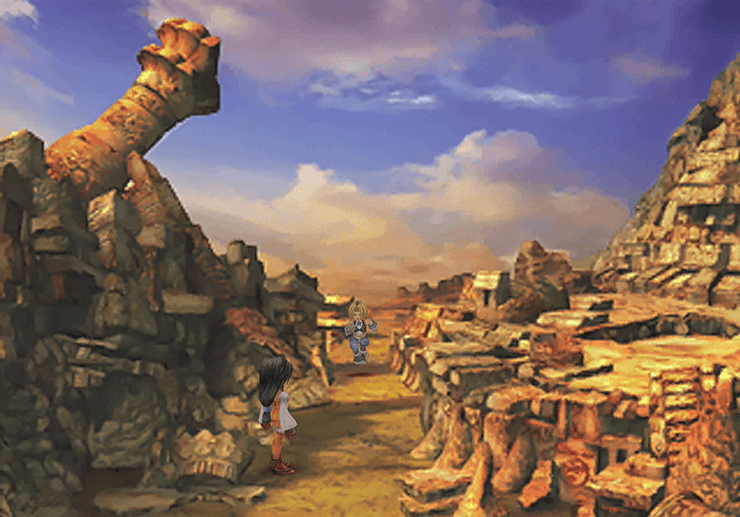 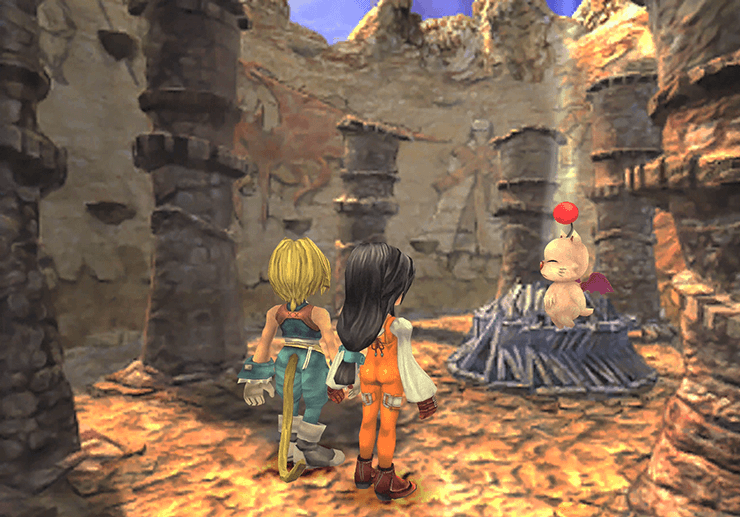 - “Th-This must be a helper from above!” - Ask Quina for advice

Leave Dagger at the Eidolon Wall and travel back to the fountain area. Speak to Moco the Moogle near the top-left side of the screen. Continue left to where Vivi is/was standing and enter try to walk through the doorway again. Mog will invite Zidane and the remaining team members in for the meal. This scene changes depending on what you chose to do during the Eiko ATEs. 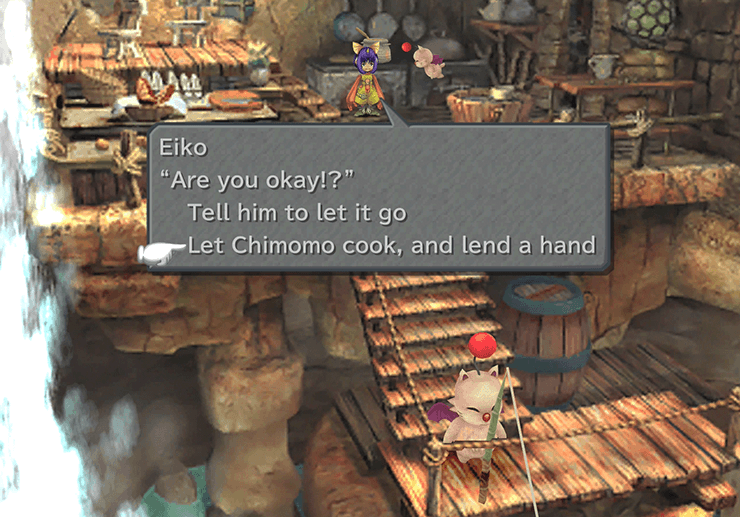 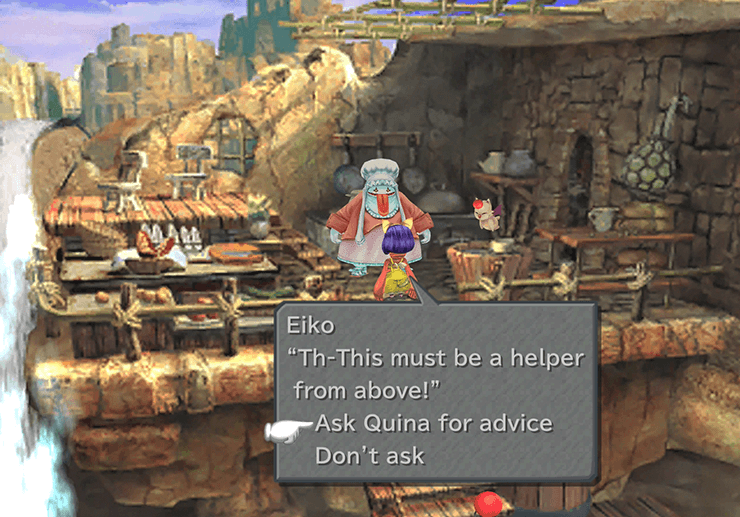 Phoenix Pinion. Grab the pot off the dining table and bring it into the kitchen as instructed by Eiko.

She will talk to Zidane and tell him more about the Iifa Tree and how to break the seal to get in. Explore the left side of the kitchen to find Kirman Coffee among the supplies. The Kirman Coffee is part of the Rare Coffees side quest.

You must pick obtain each of the three Rare Coffees for the Rare Coffees side quest in order to obtain the My Little Airship Trophy. Make sure you don’t miss picking up the Kirman Coffee! 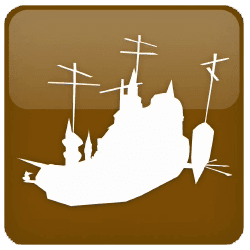 Attempt to leave Eiko’s house and Momatose will suggest that you get some sleep before leaving (which you should agree to do). 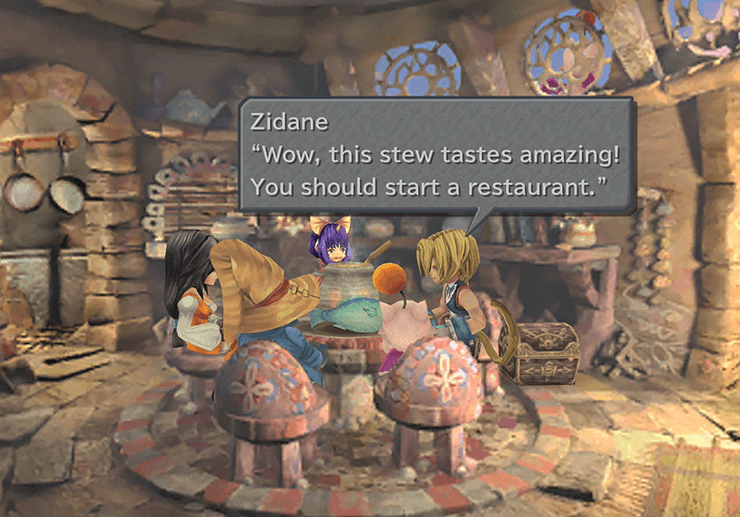 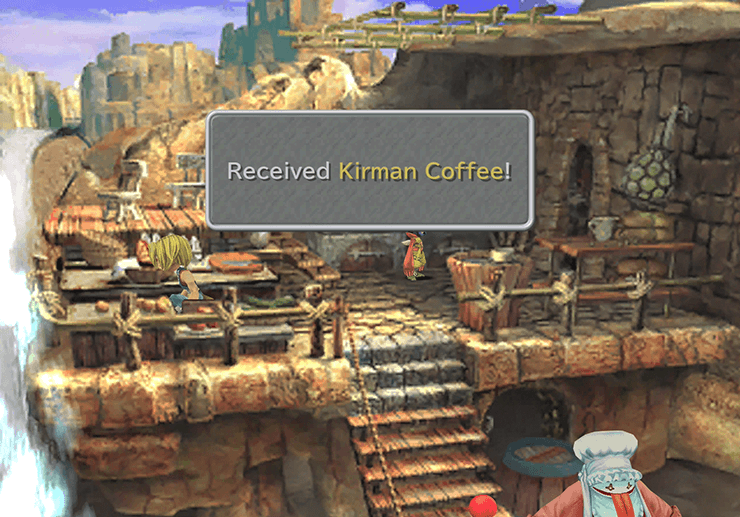 There are a few more scenes involving Vivi on the ledge with Eiko listening in. Eiko will choose to continue tagging along with Zidane, Vivi and Dagger on their journey. She will join the party in place of Quina whom the party will leave at Madain Sari for now. Turn around after you get kicked out of the village and speak to Morrison the Moogle to access his shop.

You should take this opportunity to stock up on a few

Magic Tags which can be used to cure the Zombie Status effect. You should also make sure that you have some

Softs on hand for some upcoming fights. Other weapons and armor for sale include:

There are a number of ATEs that you should watch in this area before you leave in order to obtain the Movie Critic Trophy. Make sure that you have watched:

Restart your game from an earlier save point if you are aiming to obtain the trophy and are not sure whether you saw each of the ATEs. Most of them can be seen by wandering around Madain Sari though.

Travel to the south back towards the Conde Petie Mountain Path which looks like a stone bridge crossing the water. Use the screenshot below to help you find it. 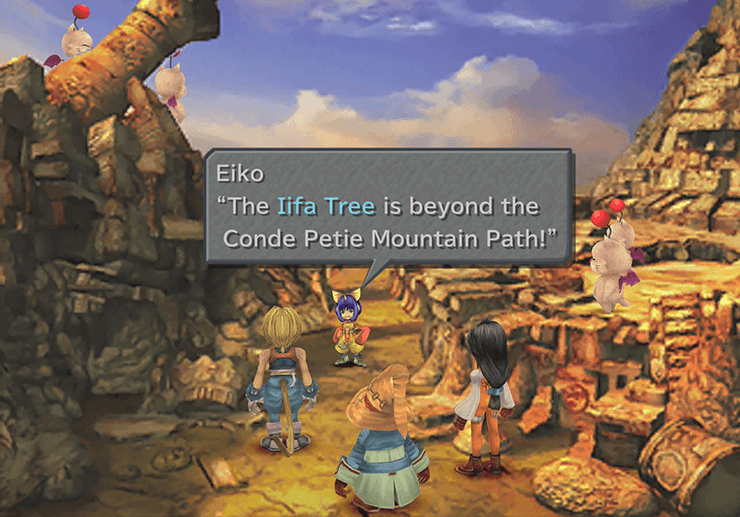 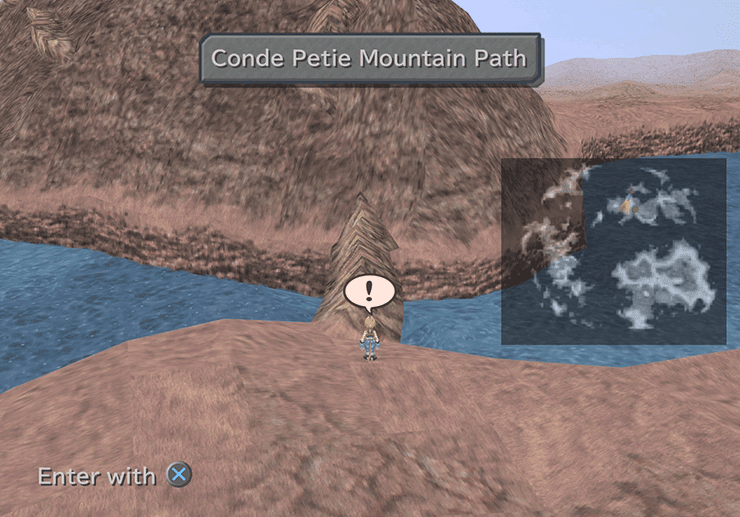 Walk south across the large vine and southwest again taking the left exit back to the stone statue (the previously contained the Yellow Stone). Travel north from here exiting out the top side of the screen. Use the screenshot below to help you make sure that you’re going the right way. 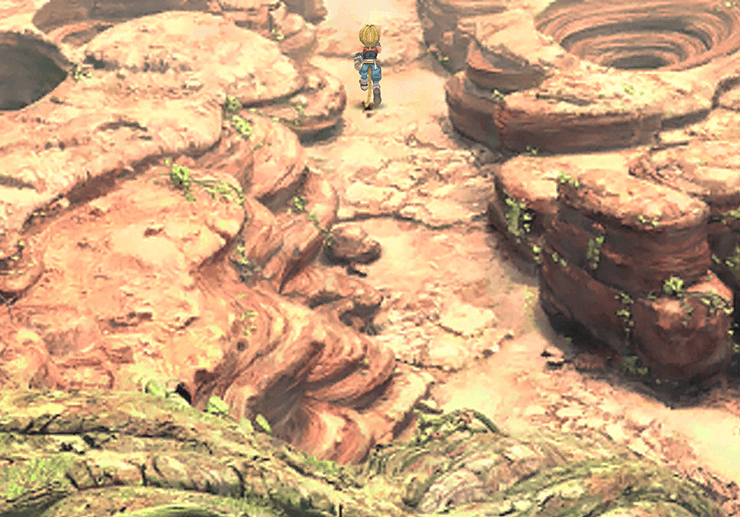 There is another friendly monster in this area that you can find called the ‘Nymph’. If you found the Yeti in the Lucid Plains area near Madain Sari, it asked you to say “Hi” to her when you reached this area. Search around in the forested areas to track her down.

Once you find her, she will ask you for a total of 3 Ores. Give them to her and she will reward you with 30 AP and an

Emerald. The Nymph is another of the friendly monsters that you can find - check out the Friendly Monster side quest section for more information. 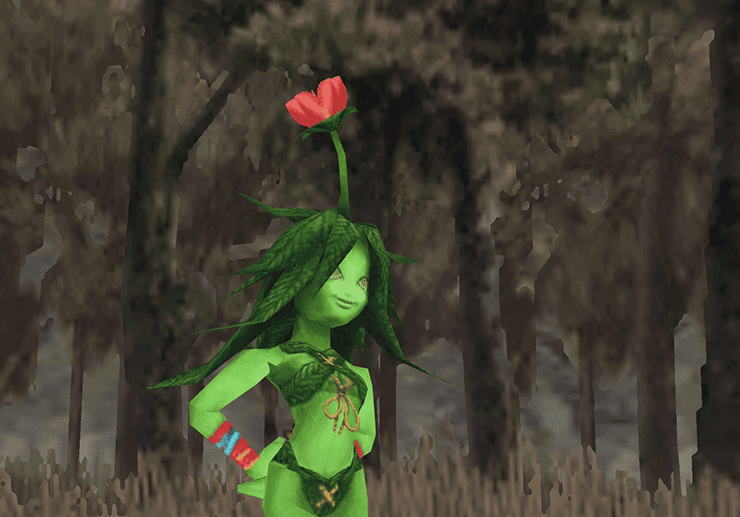 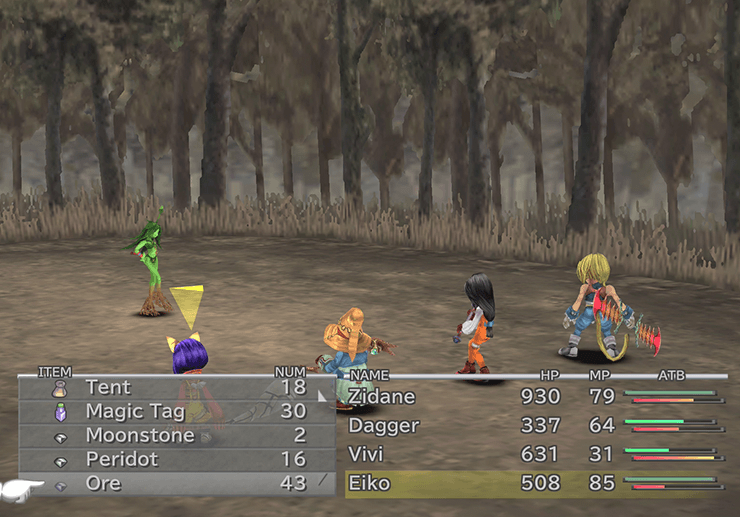 The Iifa Tree / Sanctuary is very easy to find - it is the large tree in the middle of the Pualei Plains.