Iifa, the Ancient Tree of Life

The way to the Iifa Tree will still be blocked by an invisible force field. Ask Eiko about the forcefield and she will explain that she will need to summon the Eidolon in order to break the seal. You will receive a

Ruby during the sequence. 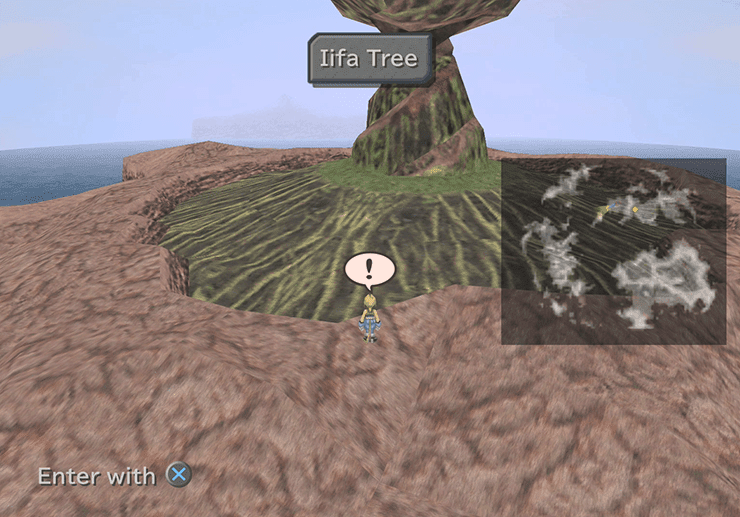 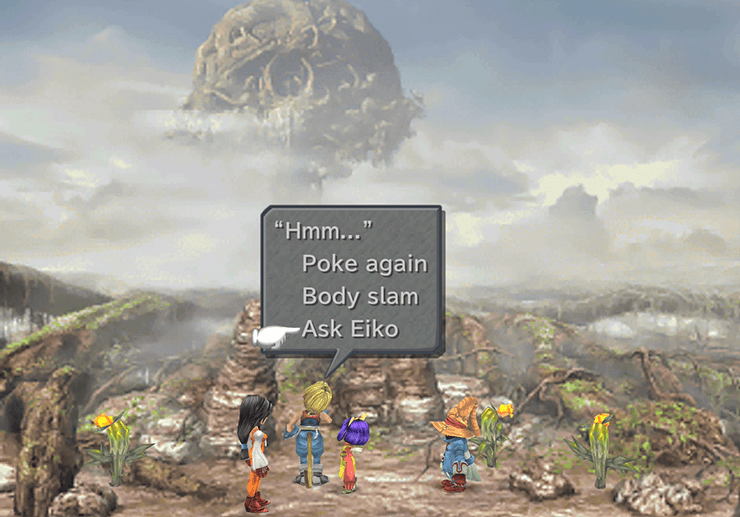 Soft on it. There is another monster called a Dracozombie which can be immediately killed by using curative items or spells on it, such as a

Life spell, which is an instant kill. Both monsters are pictured below. 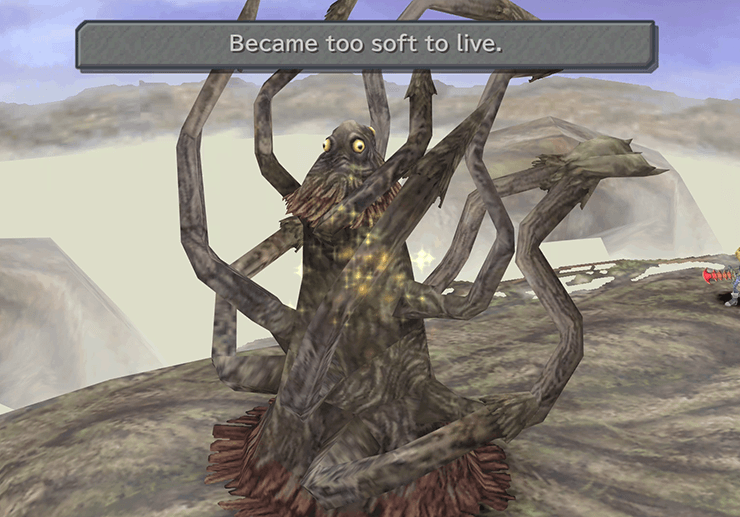 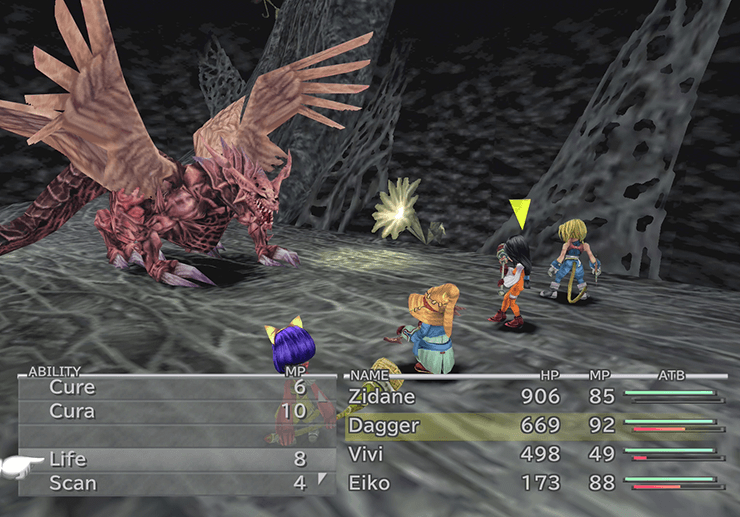 Walk straight forward into the next screen. Follow the linear pathway along through the next few screens - there are no turnoff points so continue along until you reach the platform where Mocchi the Moogle is standing. Take the opportunity to use a

Tent and save your game.

You will also want to select the Mognet option so you can provide the letter from Mogryo to Mocchi. Continue to the end of the pathway where there is an elevator that will take you to the next level down. Try standing on it when presented with the option to do so. 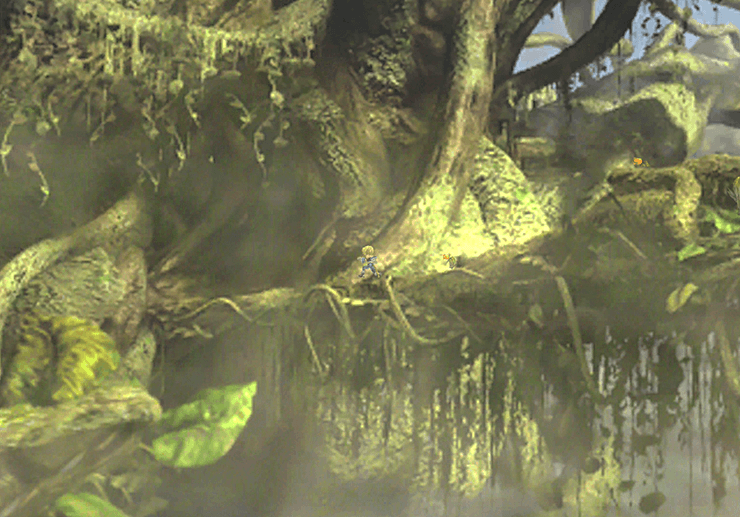 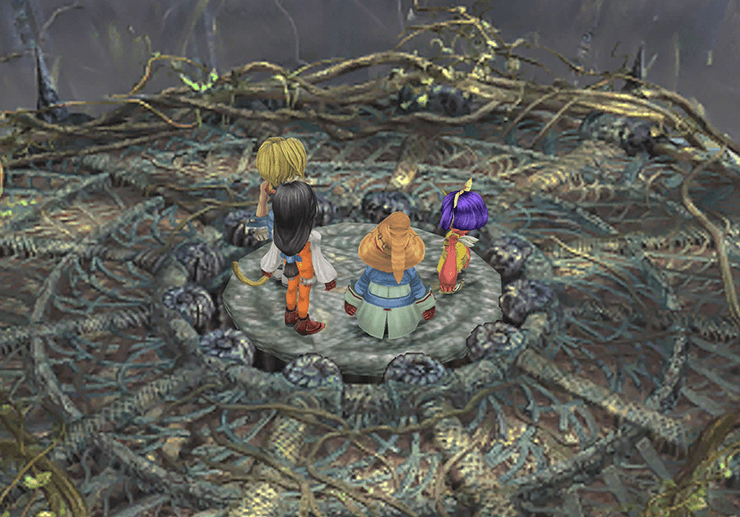 Continue down the pathway into the next area. There is a hidden item sticking out on the right side of the screen (shown in the screenshot below). Have Zidane choose to “Push it” to release a chest on the platform above which contains a

Phoenix Down. There is another treasure chest at the bottom of this screen that contains a 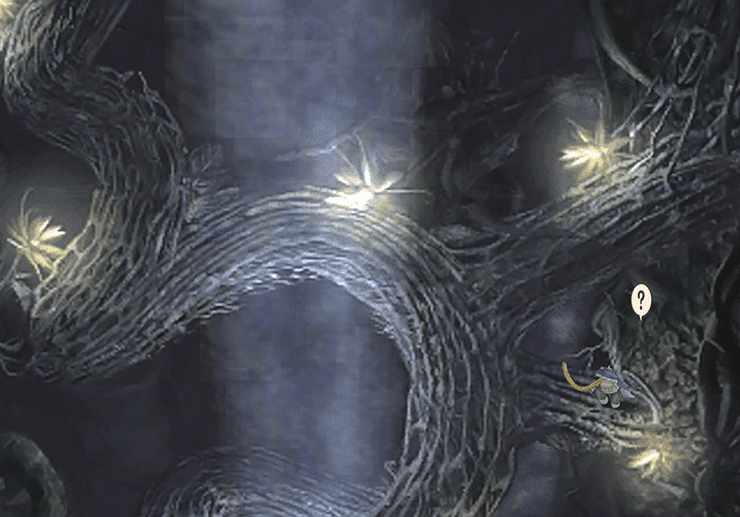 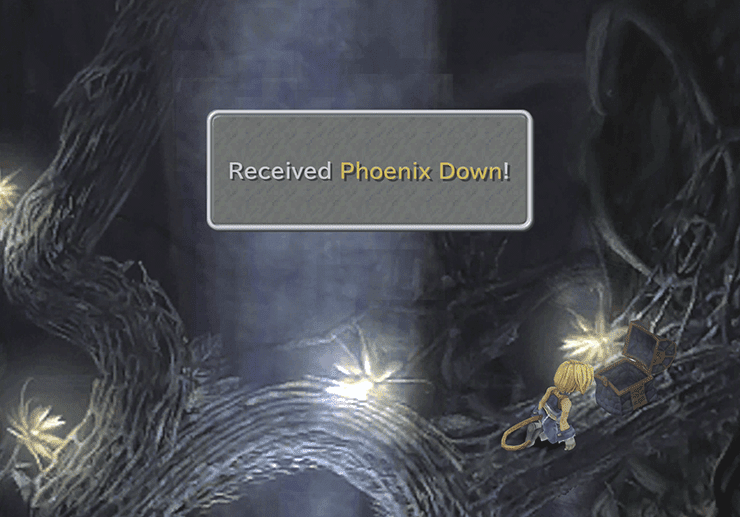 The next screen has another hidden switch on the left side of the screen. Choose to “Push it” and then return to up to the previous screen. There is a newly revealed chest towards the top of the screen that contains a

Lamia’s Flute. There is a partially hidden treasure chest just to the left of that one that contains a

Remedy. Follow the main pathway down to the bottom once you have picked up both items. 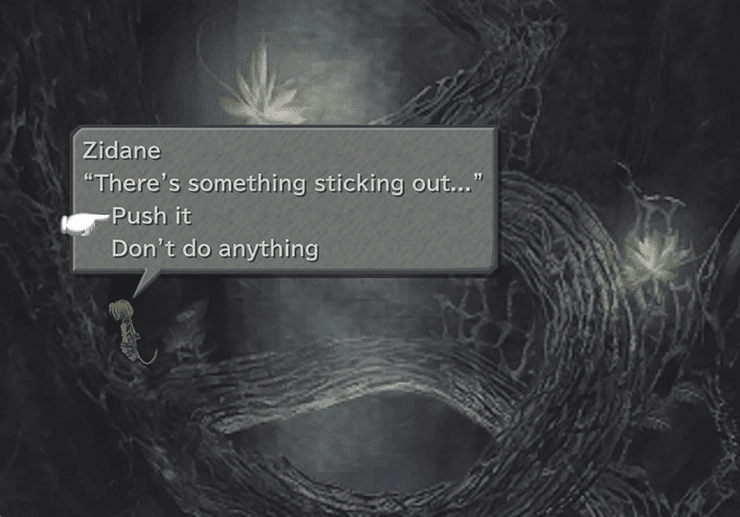 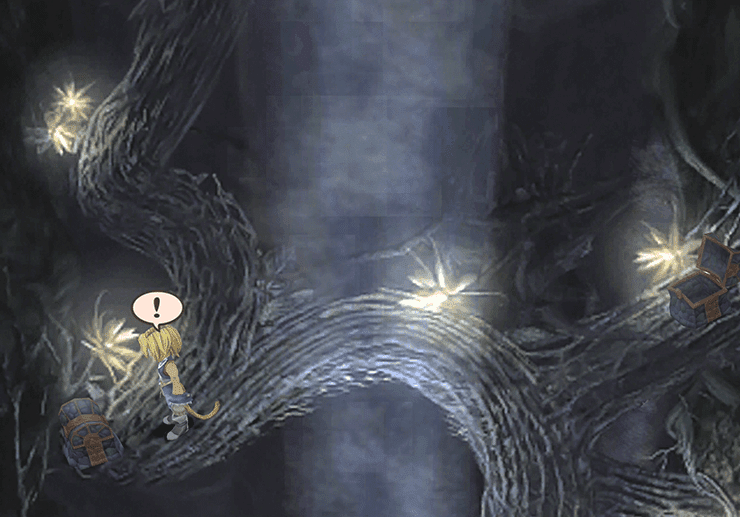 The crew will stumble across a leaf-like platform attached to a large pillar in the center of a pit. Eiko will suggest that they all jump on at which point they will all be carried down to the bottom.

There are a few fixed battles along the way - the first is against 3 Zombies which is then followed by a Dracozombie. You can still use curative items on each of these enemies (the

Life spell specifically) to kill them in a single hit. 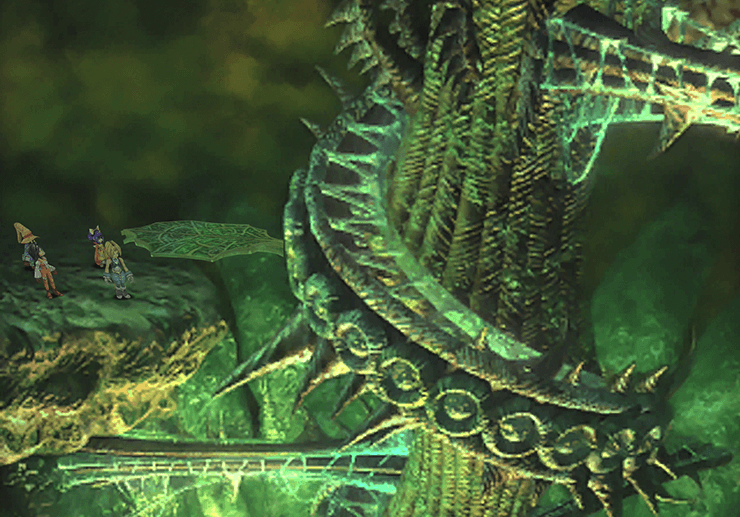 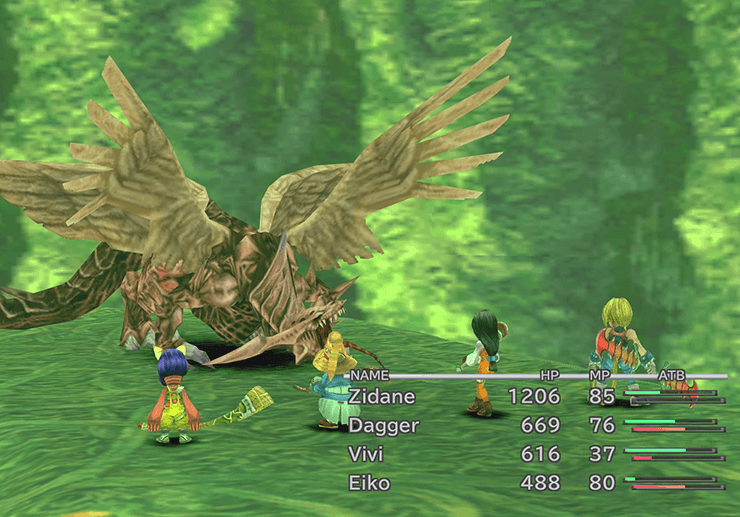 Elixir. On the left side of the screen, behind the wall that Vivi and Eiko are standing in front of, is another hidden treasure chest that contains a 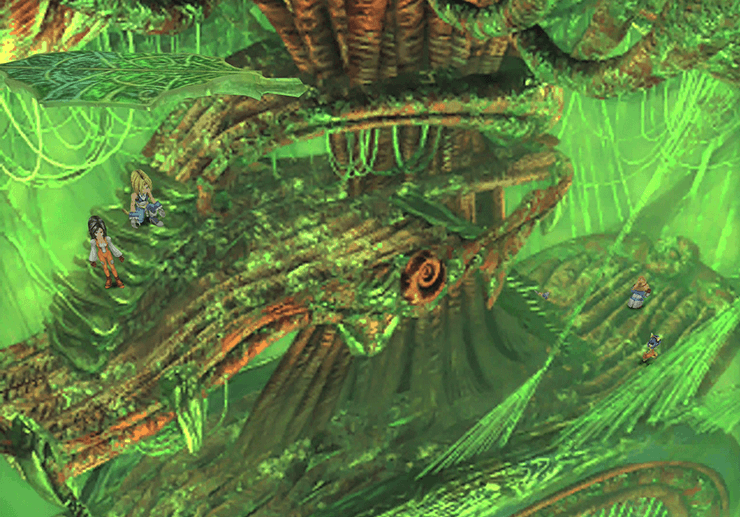 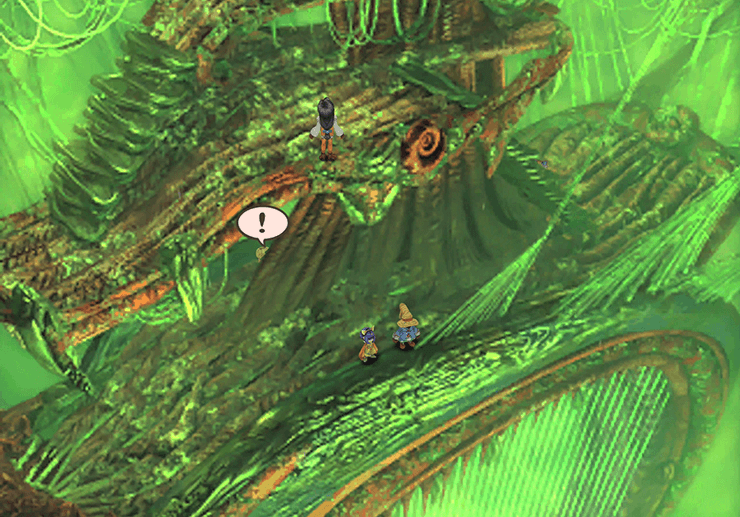 You can equip your characters with the

Body Temp ability before the upcoming boss battle if they have that ability to make the boss fight much easier. Explore the bottom-left side of the platform for an Action Icon once you are ready to proceed.

Soulcage is incredibly easy to defeat. Soulcage is an Undead-type enemy which means that you can have one of your characters (either Dagger or Eiko) cast

Life on it to instantly kill it and end the fight. The difficulty is in attempting to steal the items before you end the battle. The

Brigandine is a fairly nice piece of armor so it is recommended that you steal before ending the fight.

This is the first boss/enemy that is capable of inflicting the Heat status effect on one of your characters which will happen every time that it uses its Mustard Bomb attack. Whenever a character is under the effects of Heat, they will instantly KO themselves if they use a command. You have to wait for the status effect to wear off. This can be prevented if you pre-equip your characters with the

Body Temp ability before the fight as suggested above.

If you hit Soulcage with a fire-based attack it will light on fire and begin using a move called Fire Blades which deals an incredible amount of damage to your party members. Do not use fire-based attacks.

It is weak against

Blind status effects though, so you can have Dagger and Vivi cast those spells on it while Zidane is attempting to steal the 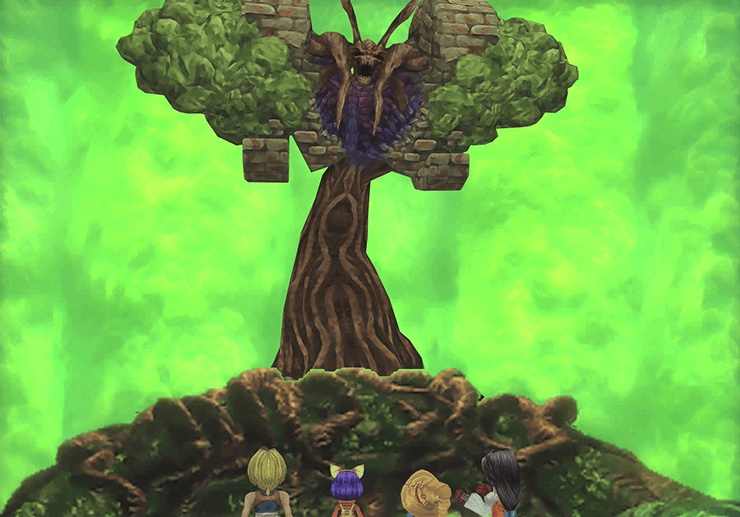 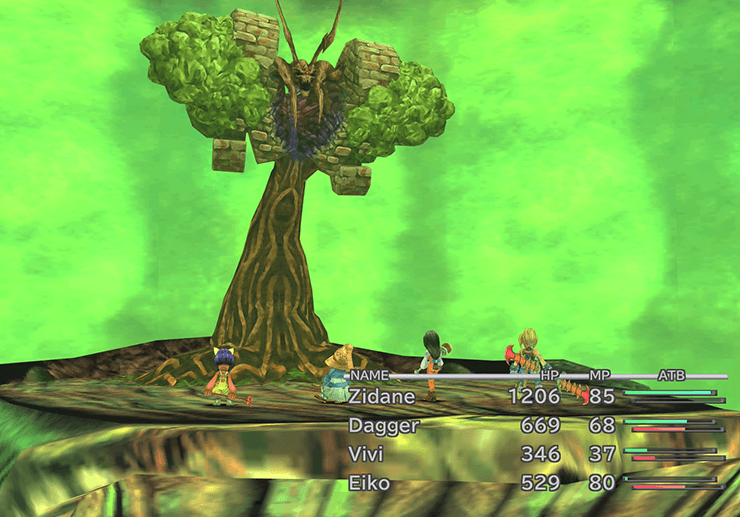 After all of the Mist disappears, and a few more lines of dialogue, the team will agree to return to Madain Sari with Eiko.