Included below are some general tips for playing Final Fantasy XII. These tips are based off the standard PlayStation 2 release of the game and may become obsolete once The Zodiac Age has been released, but should provide a good starting point for new players of the game.

Final Fantasy XII introduces a new battle mechanic known as a Gambit. A Gambit is an automated move that you can setup to have one of your party members perform an action under certain conditions. For example, you can setup a Gambit to have a party member use a

Potion on a team member when their health falls below 50% HP.

Successfully using Gambits is critical to playing Final Fantasy XII, both from an enjoyment perspective and from a skill level perspective. The game is not designed around individually inputting actions as was the case in previous Final Fantasy titles.

Check out the Gambits section for more tips and tricks on what Gambits you should activate on which characters and for which boss fights. 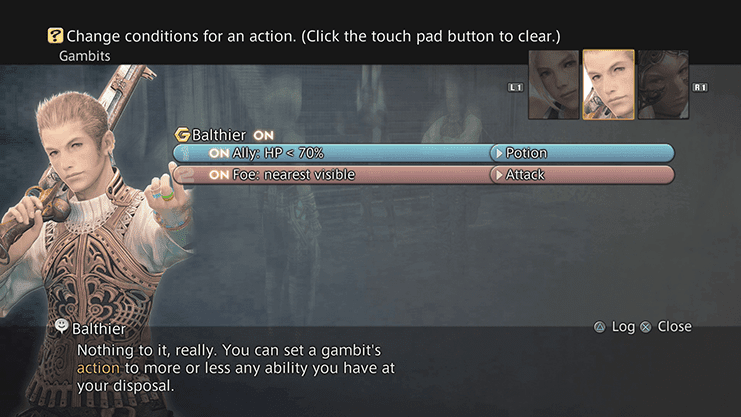 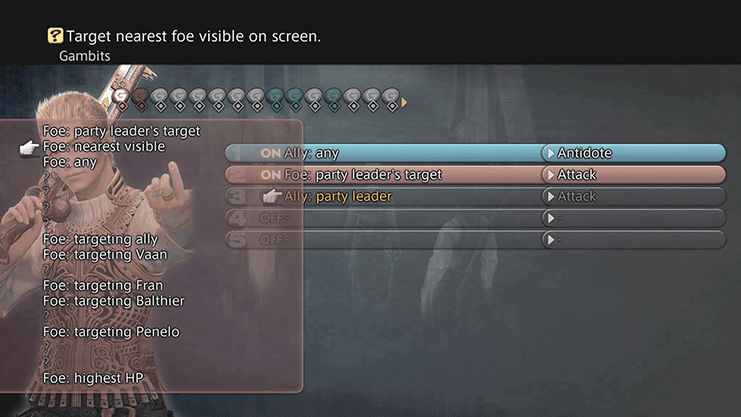 The game enables this setup by having foes and bosses behave similar to what you would see in an MMORPG. Foes and bosses will “aggro” towards a character who damages them more or who casts healing spells more based on a number of calculations which we won’t get into here, but suffice it to say, you can employ strategies to ensure that foes and bosses target the appropriate character (the tank). The game also provides a spell mid-way through the game called

Decoy which allows you to force enemies to target a specific player.

More details about setting up your party can be found in the Party Setup section.

Shell. These positive status effects, or beneficial enhancement spells, or status buff spells, or whatever you wish to call them, are extremely important in this game. Previous Final Fantasy games made these spells useful, but somewhat optional, whereas ignoring these spells in Final Fantasy XII will make a playthrough of the game much more difficult than it needs to be.

For bosses and more difficult to defeat enemies, you should ensure that you are using all of the positive status enhancing spells including:

Some of these buffs can be enabled by equipping certain armor or accessories. For example,

Bubble can be activated permanently by having your characters equip a

Bubble Belt, but the other spells will require your party members to cast them on one another and re-cast them throughout a fight.

This Final Fantasy XII strategy guide will include tips for which buffs to activate and will give a heads-up before a major battle or boss fight so that you can prepare your party.

Many players will jump into the game without reading the instruction booklet, or will overlook this simple tip. You can switch your “Party Leader” at any point during the game by pressing Down on the D-Pad.

Note: These License Board tips only apply to the original PlayStation 2 version of the game.

There are two important notes to keep in mind as you buy Licenses using License Points during a playthrough of the game:

1) In the lower section of the upper half of the board you will find a number of “Augment” abilities. This includes abilities such as adding new Gambit slots, increasing your HP and Licenses like Headsmen, Martyr and Inquisitor which help to restore MP. While it is important to buy Licenses that will allow you to equip new armor and weapons, this Augment section of the board is much more important. Make sure that you pursue this section of the board with all of your characters as soon as possible
2) It is important to plan out and ensure that all of your party members (and even your reserve party members) reach 2 or 3 Quickening slots on the License Board. Check out the License Board section for more information on where to find the Quickening slots and continue reading below for more information on why this can help with a playthrough of the game.

This is one of the most frustrating aspects of the game, especially for new players to Final Fantasy XII. Like most Final Fantasy titles, conserving MP is incredibly important and running out of MP can spell the death of your entire party.

The first two Licenses are critical – all party members should have them. The third License, Martyr, is less critical, as only one or two of your party members should be taking damage and not that much if all goes well. The fourth License will only be helpful if you plan to attack primarily with Magick spells.

Using Headsman and Inquisitor, as well as a fairly strong weapon, will help even your healers and mages conserve MP. It can even be beneficial to have them use a powerful weapon over using a Staff or Rod.

Finally, if you are in the later stages of the game and are looking for ways to farm

Hi-Ethers, check out the “How to farm Hi-Ethers” section for more information.

Final Fantasy XII offers another new mechanic to the game wherein you can chain enemies if you defeat several of the same type in a row. The more enemies you defeat in a row the better the loot they will drop. Eventually, they will start dropping Silver loot tokens and then Gold loot tokens. The exact point where it switches from regular loot tokens to Silver and then to Gold is random each time, but foes will drop better and more valuable loot using this method.

There are a few critical junctures in the game where you should take the opportunity to do some chain leveling. Note that the walkthrough section on Jegged.com points each of these sections out once you reach them, but they are:

Check out the Grinding and Power Leveling section for more information.

Gil is earned through two different methods in Final Fantasy XII – by completing side quests and Hunts and by selling loot to the Bazaar. You can use the Chain Leveling tips above to earn some solid loot at those three points in the game and check out the Loot section for more information on how to obtain the best loot and keep your gil reserves high.