The team will arrive at the Al Bhed hometown of “Home” after traveling through the Sanubia Desert. They will arrive to find the area under attack. After meeting up with Rikku’s father, Cid, and speaking to one of Rikku’s companions, it becomes clear that the area is under attack by the Guado and Yevon.

Once you regain control of Tidus, check along the left side of the screen to find an

Hi-Potions off the corpses of the dead Al Bhed soldiers.

Save your game using the Save Sphere off to the right side of the doorway. Go through the front doorway when you are ready. 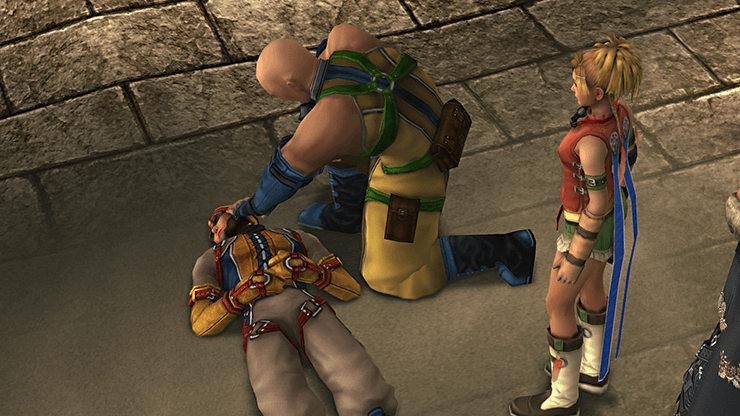 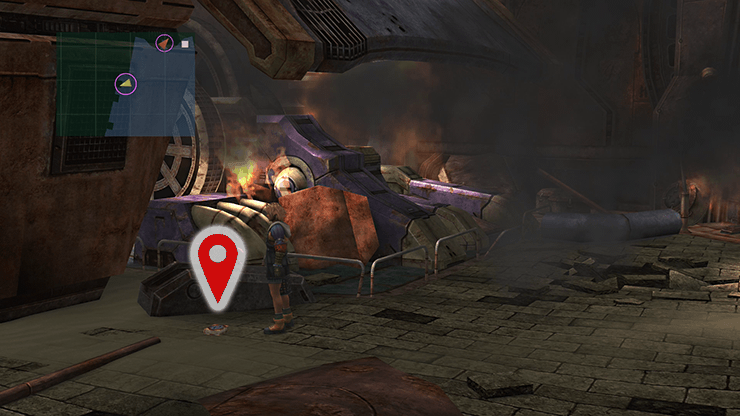 Mug ability to steal a

Auto-potion ability and healing itself.

The Bombs can be defeated like similar to a normal fiend. Focus on one Bomb until you destroy it. If they manage to grow three times they will use their ‘Self Destruct’ ability which only damages for 1,000 HP. A much more manageable hit at this stage in the game that you can probably survive.

Go forward through the only doorway that you can enter. 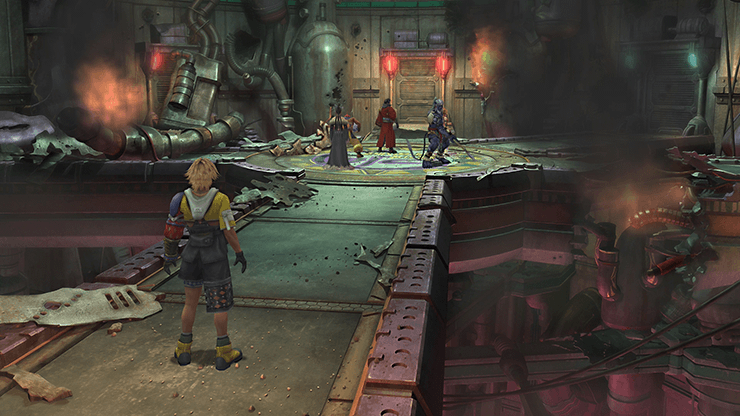 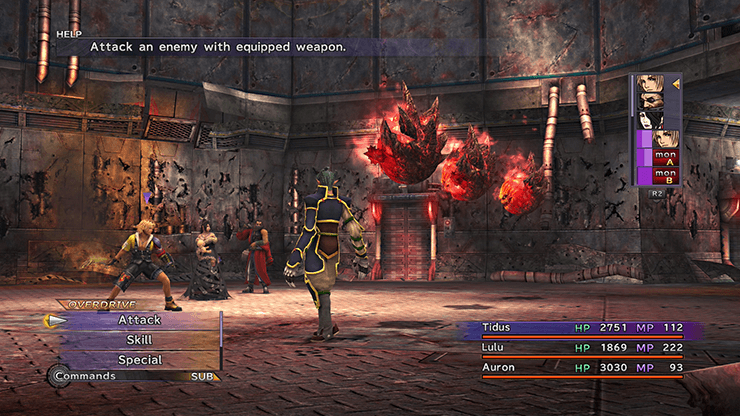 You will be thrown into another battle as you enter this area. This fight is similar to the previous one except it involves two Dual Horn fiends. Focus on your efforts on the Guado Guardian (have Rikku use

Steal on it) and then take out the two Dual Horns next.

You will regain control of Tidus at the top of the stairs but he has actually run past a few rooms that we will be backtracking to. But first, there is a treasure chest just off to the side of the pathway that contains four

Al Bhed Potions. This chest is located at the very bottom of the stairs and you will have to turn around after descending the stairs in order to see it.

Now go all the way back up the stairs. 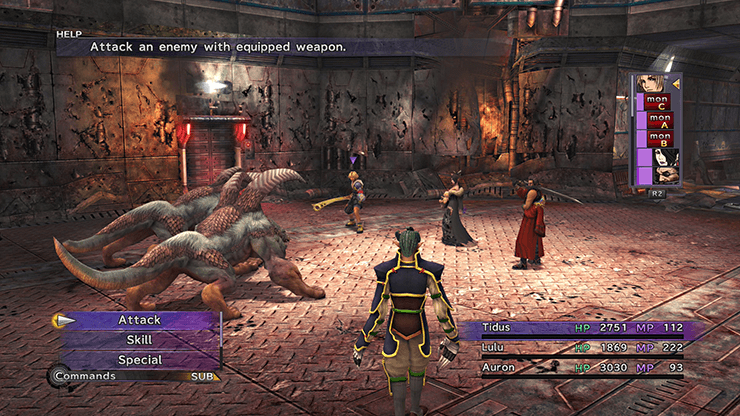 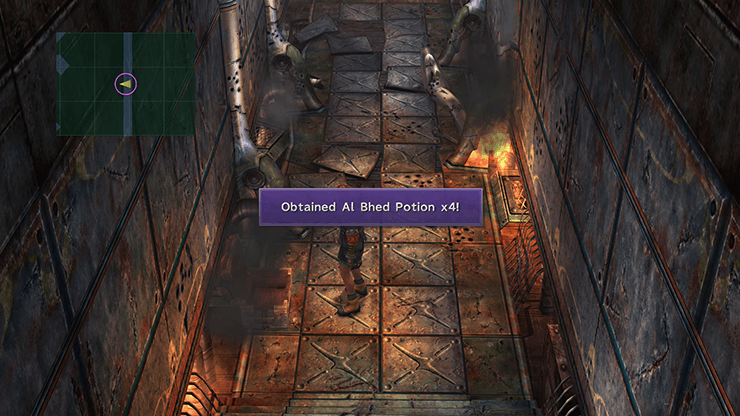 The area that you are in has three separate pathways with the Save Sphere being located in the left most pathway. Use the mini-map to make sure you are in the right location. You can head down and save your game if you’d like to before continuing.

Do not go through the doorway that is close to the Save Sphere yet as you will be locked out and will have to move forward with the next section of the story. Instead, go back south, towards the stairs again. 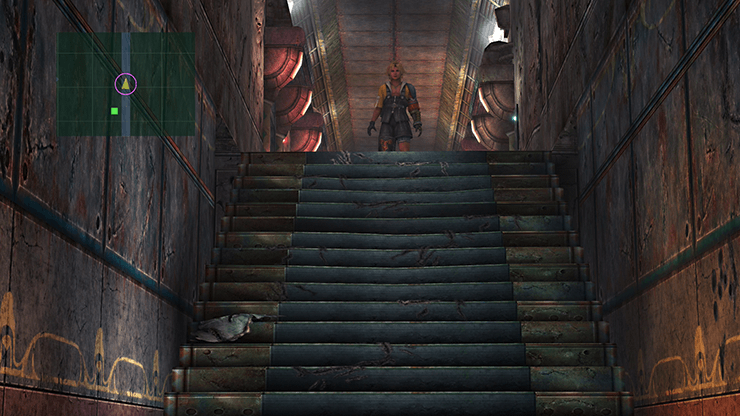 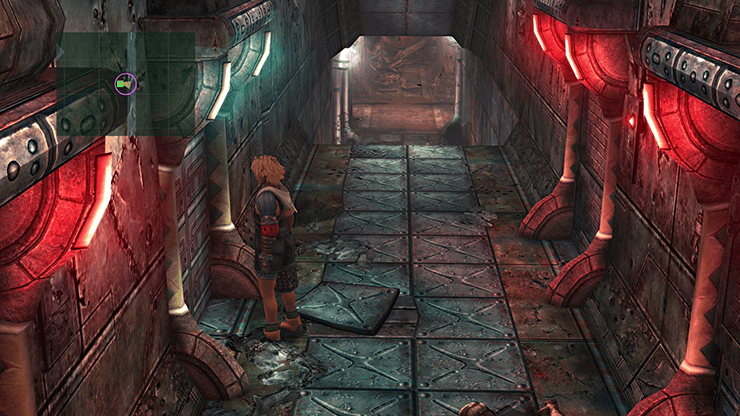 There is an additional room at the top of the stairs (that Tidus runs past on his way in) called the “Living Quarters” that is marked by a green square on the mini-map. Again, this is in the southernmost section of this Main Corridor area.

Go through the doorway and you will be ambushed and thrown into a battle against a Guado Guardian and two Dual Horns again. Pick up the

Al Bhed Primer (Vol. XX) on the bed after the battle. 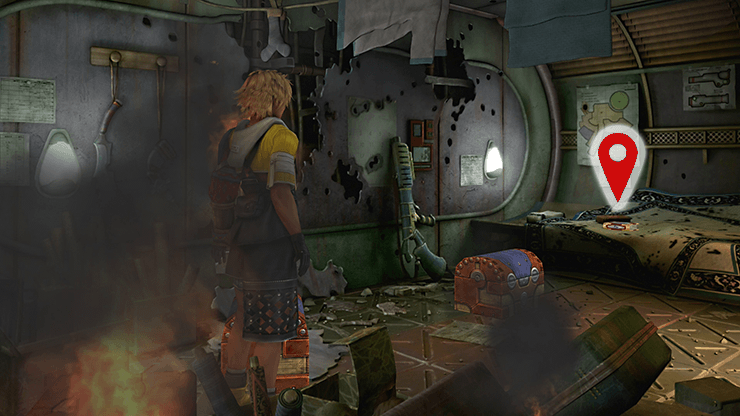 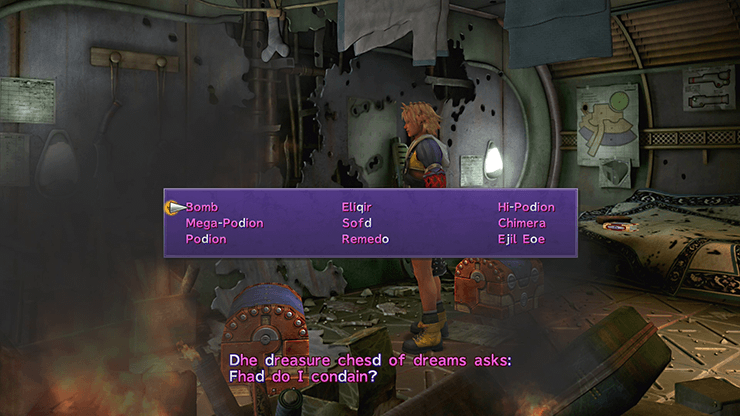 The Bomb, Chimera and Evil Eye “items” are actually battles against fiends so don’t select either of those two options, but from there, it’s your choice. The best items are either the

The second treasure chests, to the right of the first, indicates that you need to “Enter the password in proper Al Bhed!”.

This treasure chest contains a

Friend Sphere. Make sure you pick up the

Go back down the stairs again towards the Save Sphere. Take the middle path to find a treasure chest that contains six

Take the pathway leading to the right and you will find

Al Bhed Primer (Vol. XXI) lying on the ground. Enter the doorway and you will be thrown into battle against a Guado Guardian and two Chimeras. 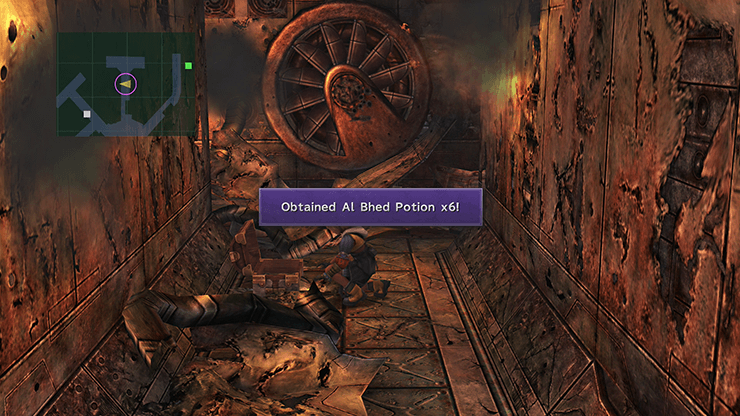 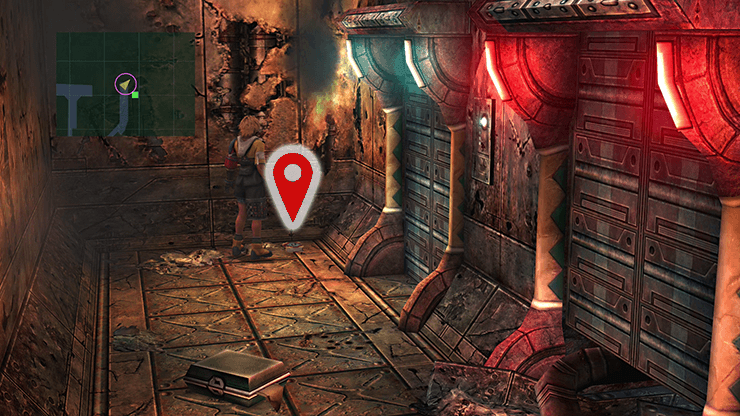 You will have to break the passwords in order to open the Al Bhed treasure chests inside this room. You will likely be able to read most of the Al Bhed language that appears when you examine the chest but you don’t need to have any Al Bhed Primers in order to complete this puzzle.

The actual numbers involved in the password will change each time a person plays through the game, but the math (plus/minus/time/plus) is always the exact same. The Al Bhed text reads: 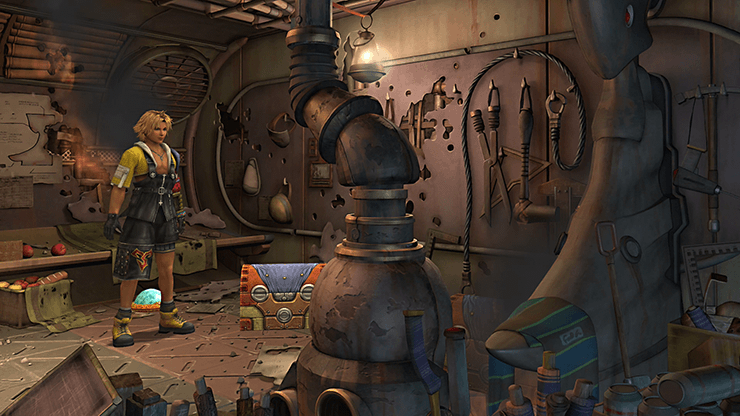 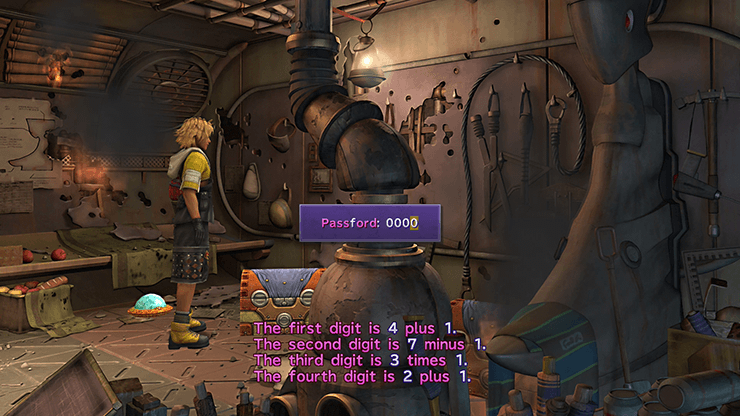 Use a calculator if you need to and input the numbers shown to complete the password. The Al Bhed treasure chest contains a

There is also another Al Bhed Compilation Sphere on the ground which you can use to load any previously discovered Al Bhed Primers in other save games that you have directly into this one.

There is one more Al Bhed chest to the right of the one with the password. It reads “Al Bhed Verification” in Al Bhed when you press the

Button near it. These answers are always the same for every playthrough.

Just in case you did not pick up enough Al Bhed Primers though, the answers are:

Head back down the the Save Sphere. Go through the doorway to the left of the Sphere.

Walk towards your team for a short cutscene. Once the cutscene has concluded you will be thrown into another battle against a Guado Guardian and two Chimaeras. Descend down the stairs after the battle to initiate a few more cutscenes. 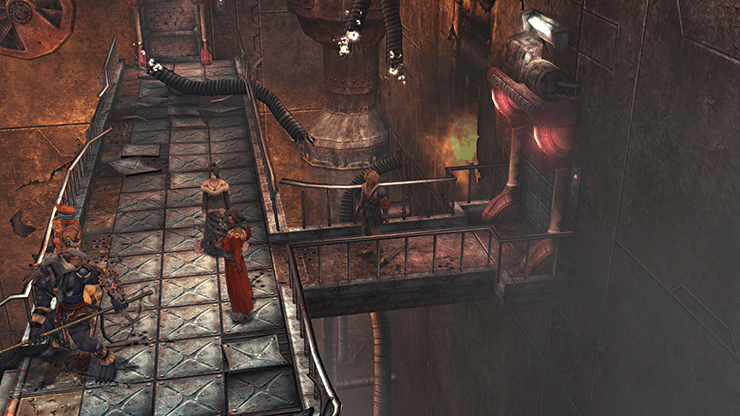 Lulu will ask Rikku about the Summoner’s Sanctum which is where they keep all of the summoners. This is the first point in the story where it will dawn on Tidus that the summoner’s pilgrimage poses a real danger to the summoners.

Lv. 2 Key Sphere. On the other side of the room is another treasure chest that is a little more hidden. Use the screenshot below to locate it and you will find a 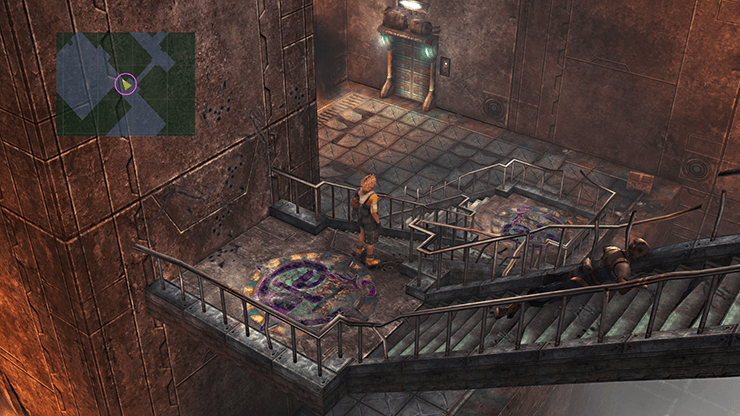 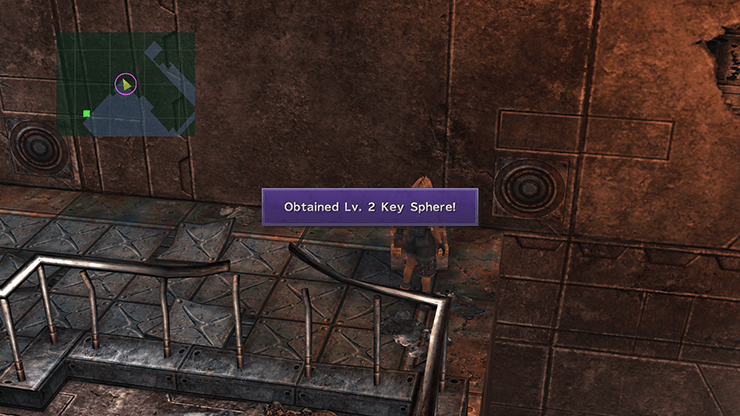 Lv. 4 Key Sphere is a particularly powerful Sphere that allows a character to jump between major sections of the Sphere Grid and unlock some of the more powerful abilities that are available. 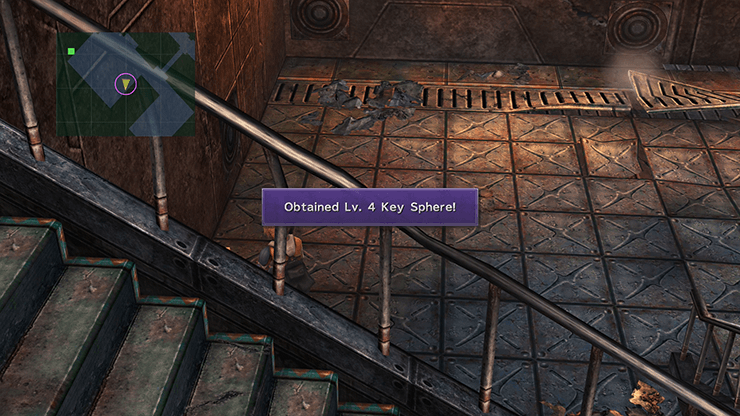 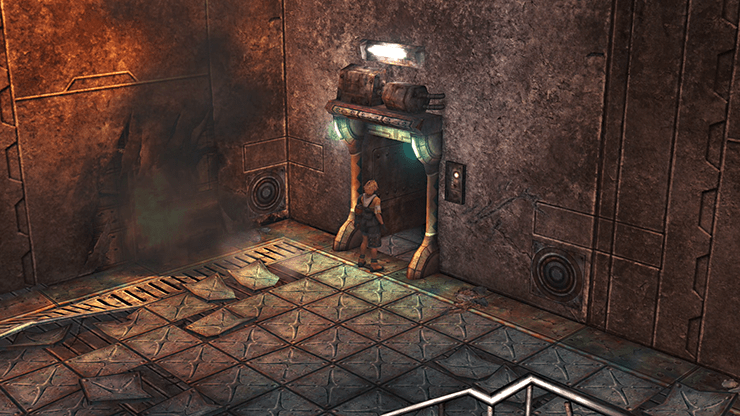 Go through the doorway to continue the story.

The summoners that the team encounters will inform them that Yuna is not in this area. They will briefly perform a sending for the dead Al Bhed. Rikku will tell Tidus that Yuna will die if she is able to summon the Final Aeon.

There will be a brief flashback to the laughing scene in Luca - thankfully though this time you won’t have to hear them actually do the fake laughter!

There is a treasure chest on the far left side of the room that contains 10,000 gil. Grab it and then head out the exit in this room. 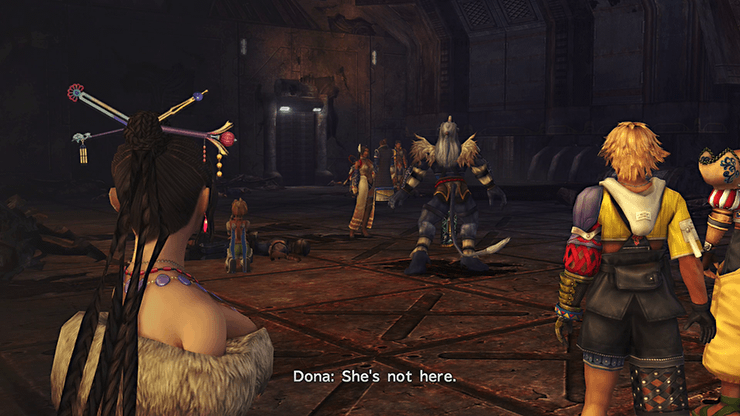 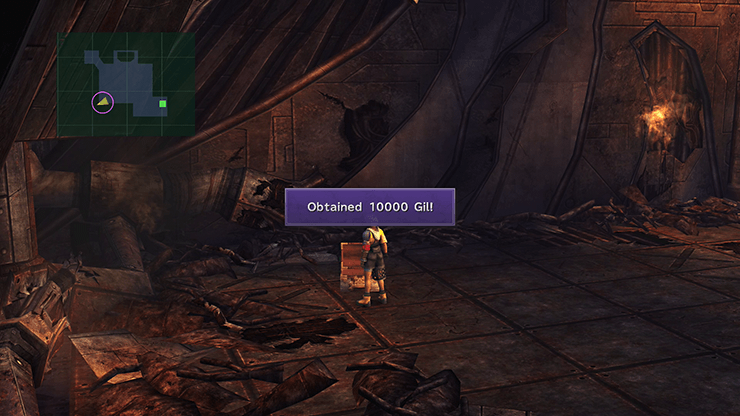 Follow the walkway along and board the Airship: Fahrenheit. 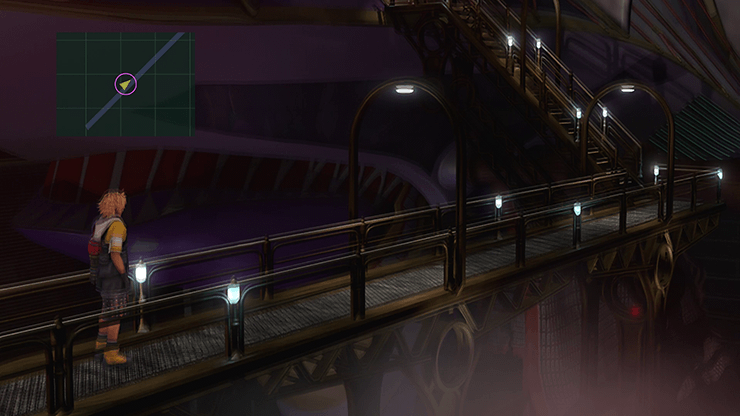 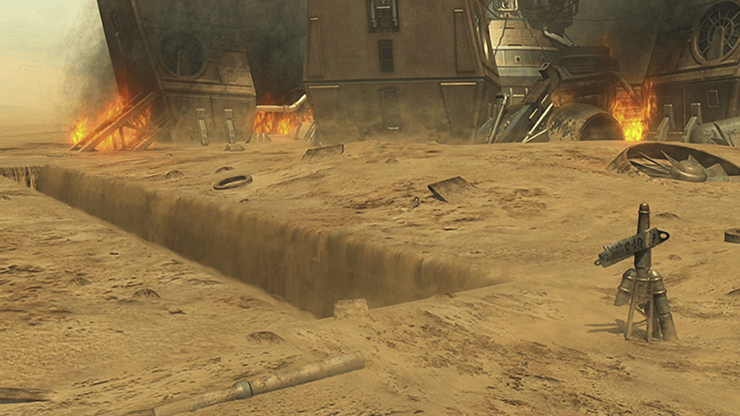 The next section of the game takes place on the new Airship.