Chocobo Racing and Breeding
Side Quest

The goal of this side quest is to breed a Blue Chocobo, a Green Chocobo, a Black Chocobo and finally a Gold Chocobo. Each color of Chocobo possess unique characteristics and abilities when you ride them on the world map.

Blue Chocobo:
Also known as River Chocobos are capable of running across shallow water (similar to the Tiny Bronco)

Black Chocobo:
Are capable of crossing both shallow waters and mountainous areas

Gold Chocobo:
Are capable of crossing all terrain including oceans and can travel unrestricted to any area of the map

There are numerous items and rewards that can be picked up in various areas of the map called the Materia Caves. The Blue Chocobo can reach a cave that contains a

Quadra Magic Materia, the Green Chocobo can reach a cave that contains a

Mime Materia, the Black Chocobo can reach both of the previous areas as well as another cave that contains an

HP <--> MP Materia and finally the Gold Chocobo can reach all three previously listed items as well as a special cave that contains the most powerful summon in the game,

The first step to breeding and racing Chocobos is to take the Highwind and travel back to the Chocobo Farm. Enter the barn, speak to Choco Bill in the house next to the barn and choose to rent all six Chocobo stables. Each of them will cost you 10,000 gil.

Chocobo Lure Materia which you can pick up outside the farm as well (shown in the screenshot below) in case you lost your first one. 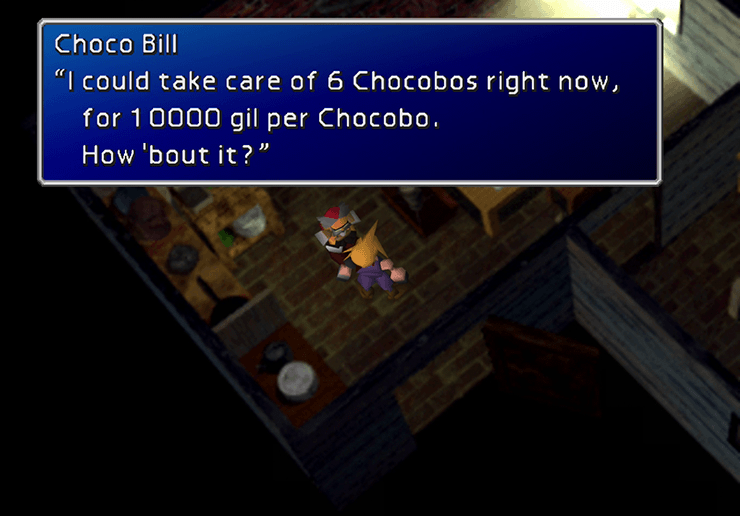 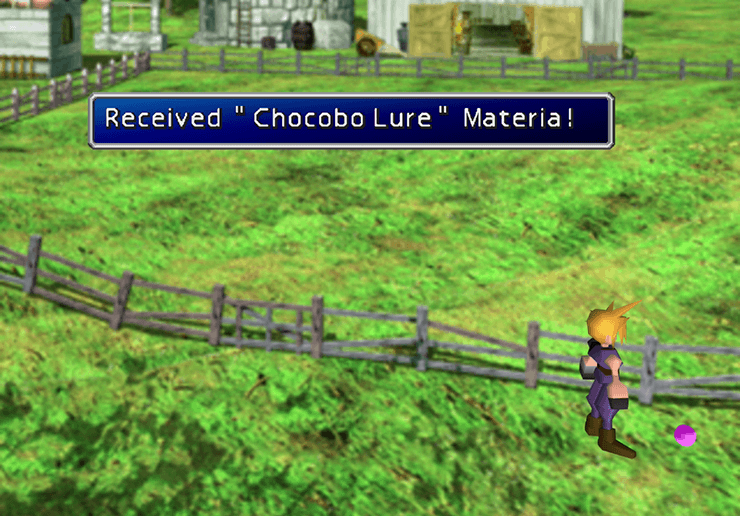 Equip both of your

Chocobo Lure Materia to your characters (using both of them will increase your chances of encountering a Chocobo). You also need to purchase Greens to assist you with capturing a Chocobo. You have the following options:

As you can see from the chart above, the most expensive greens (

Sylkis Greens) are not ideal for capturing Chocobos in a battle. Their primary use in battle is for obtaining the Chocobuckle move on your

Enemy Skill Materia. You should stock up on

Reagan Greens (around 5 should do) which can be purchased at the Chocobo Sage’s House (click on the link for more information about this particular location). 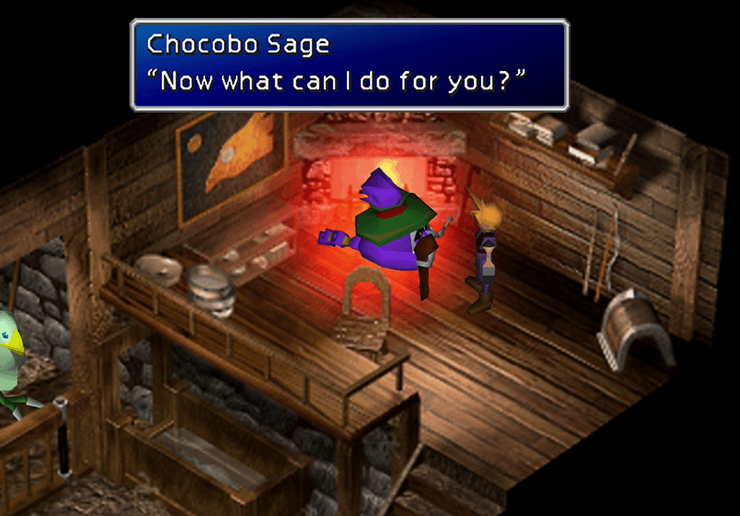 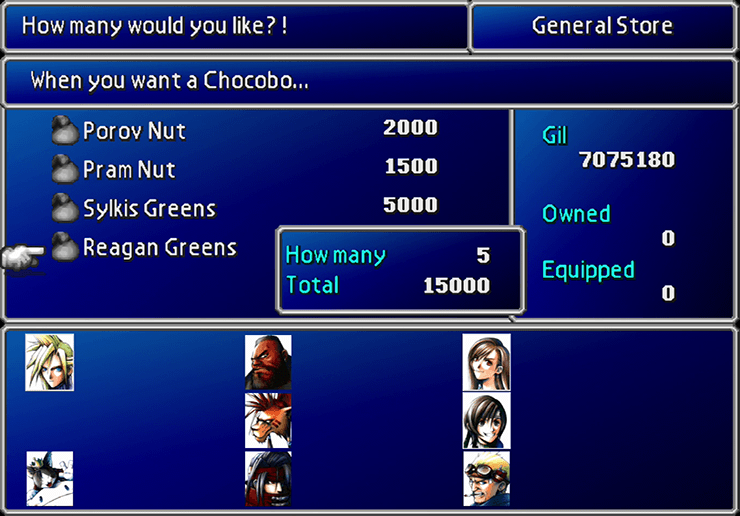 You will still require around 25-30

Sylkis Greens to raise the stats of your Chocobos so make sure that you buy some of those as well while you are at the Chocobo Sage’s House.

After you capture a Chocobo in battle you will now be given the option to send Chocobos back to the stables at the Chocobo Farm after you dismount from them. You can then move them from the large pen out front into the six stalls that you purchased.

Choco Billy will give you a short description of a Chocobo before you move it into the pen. There are 8 different types of Chocobos that you can catch that are described as follows: Terrible, Bad, Poor, Average, Fair, Good, Great and Wonderful. Choco Billy’s descriptions of the Chocobos are listed below:

“This is a great Chocobo." (Great)

“This is a pretty average Chocobo." (Average)

“I can’t recommend this one." (Terrible)

In addition to needing greens for capturing the Chocobo you will also need different nuts for breeding your Chocobos. The first nut you require is called a

They can be stolen (using your

Steal Materia) from an enemy called Vlakorados which can be found in the fields just south of Bone Village (pictured in the screenshot below). You will need at least 3 of them. 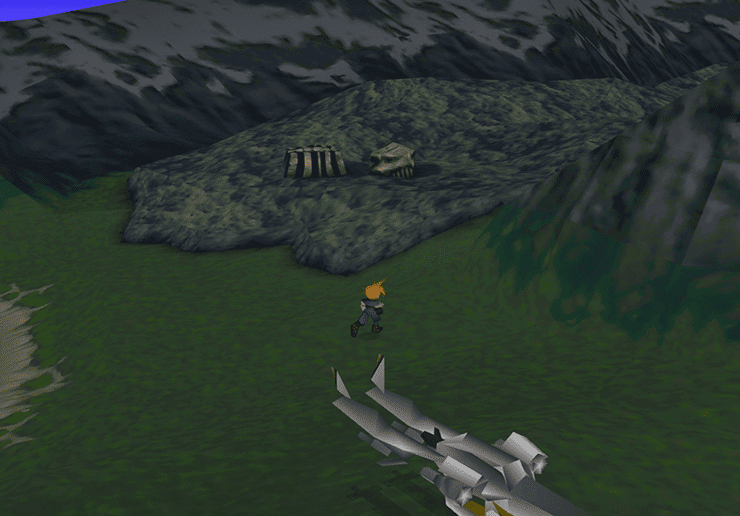 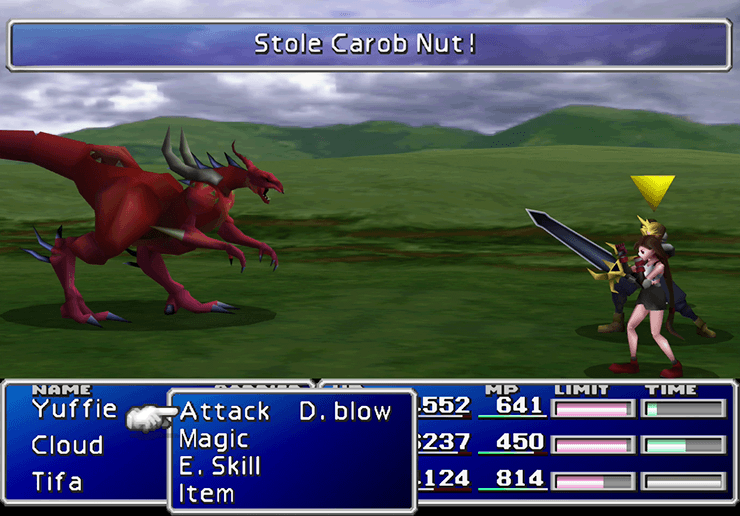 The second nut you require is called a

Zeio Nut. These can be stolen from Goblin enemies or obtained as loot after defeating them. They can be found in the forests on Goblin Island.

Goblin Island is an island located in the northeastern section of the World Map and you can fly there in the Highwind. The Goblin enemies are pictured in the screenshot below. You will only require one 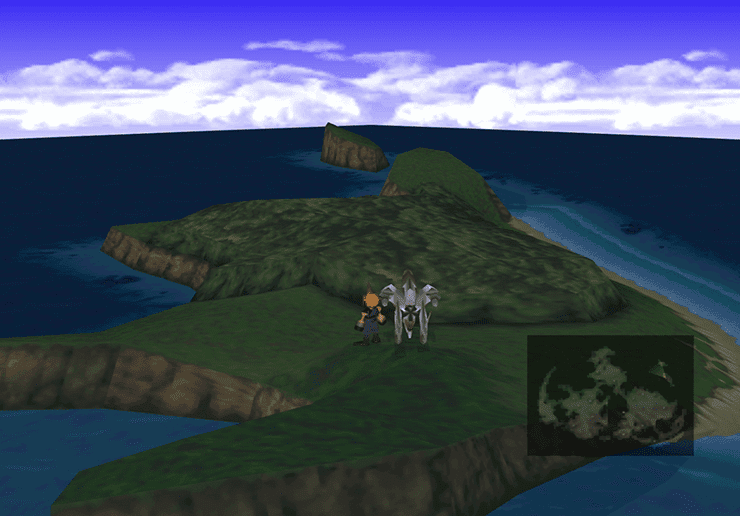 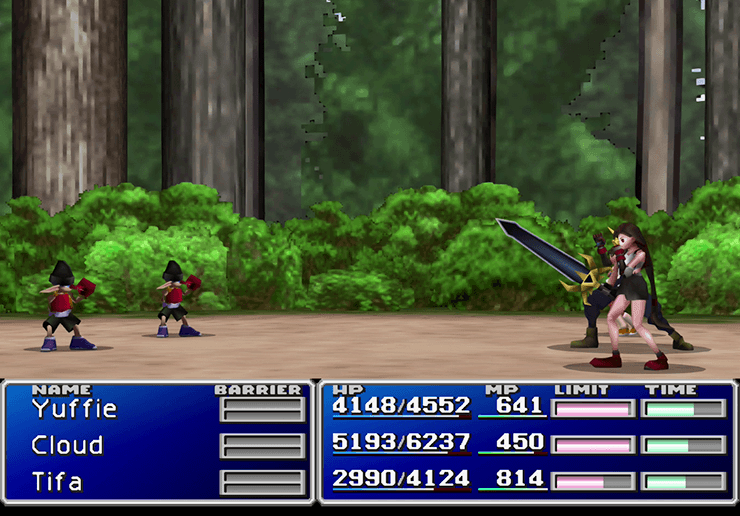 Travel to the Chocobo tracks near the town of Mideel. You can catch two types of Chocobos in this area: Fair and Great.

The type of Chocobo you receive depends on the type of enemies that surround it. For example, if either two or three Head Hunter enemies surround the Chocobo it will be of Fair quality. To capture Great Chocobos you need to ensure that the Chocobo is accompanied by Spiral enemies which are shown in the screenshot below. They look like small grey bugs and it doesn’t matter if its accompanied by one or two Spirals. Any Spirals will do. 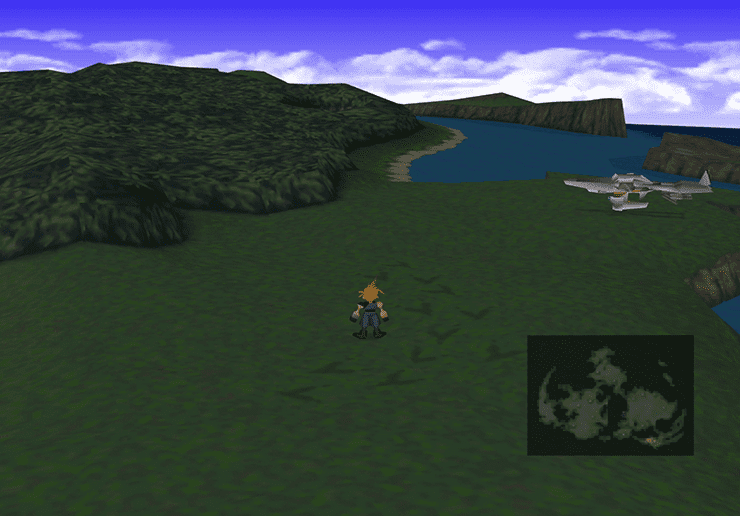 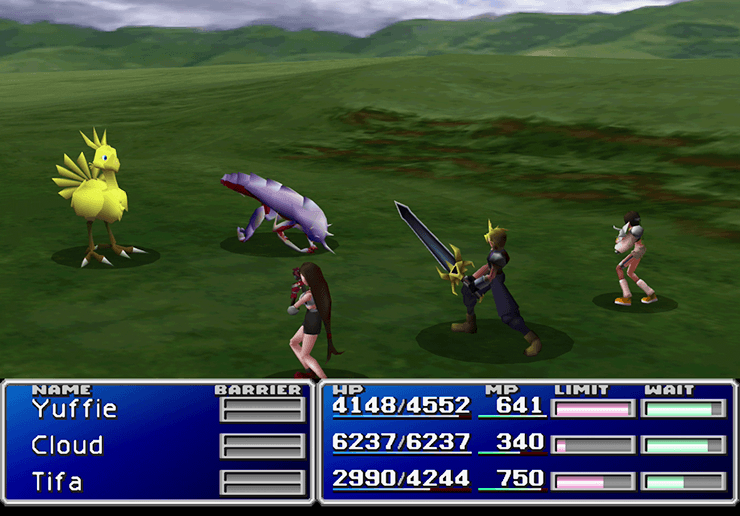 Return back to the barn and speak to Choco Billy again. Reset the game if you don’t receive the opposite gender of Chocobo when you move the second one into the barn.

Button. Using a customized controller setting will cause the “Circle” button to function incorrectly. This is a glitch in the game’s programming and there is no way around it. Switch your controller back to the default setting when moving Chocobos into the barn.


Note: This does not apply to the PS4 version of the game.

You should now race your Chocobos in order to maximize the odds of obtaining a Blue or Green Chocobo. Contrary to popular belief, you do not need to race your two Chocobos up to “S” class. All you need to do is win four races between your two Chocobos to maximize the potential of breeding a Blue or a Green Chocobo. This means that you only have to race one of them and you should pick the one with the best stats to race.

Speak to a character named Chole who can be found in the barn. Chole can tell you which of your two Great Chocobos have the best stats. Feed that one around 10 of your

Sylkis Greens until its stats discontinue rising and then travel to Gold Saucer to win 4 races with that Chocobo.

Remember to hold down the

Button on the PlayStation controller to slowly refill your Chocobo’s stamina meter. Make sure to take some GP as prizes for winning some of the Chocobo races in preparation for a later side quest involving Battle Square. 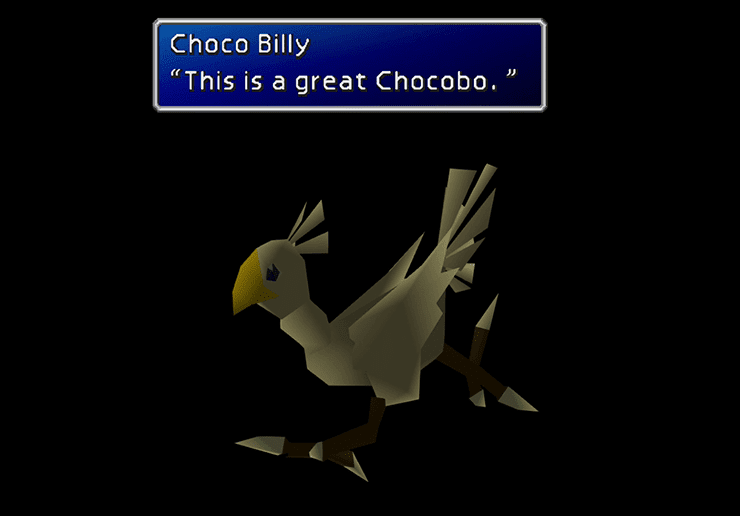 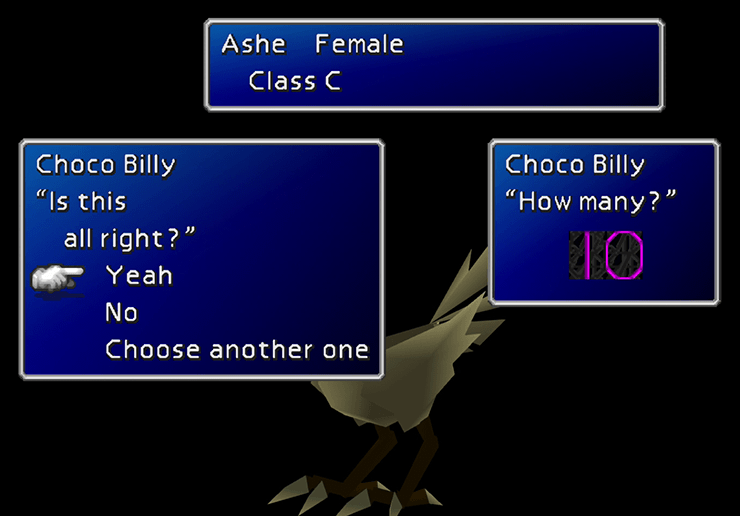 Return to the Chocobo Farm and save your game on the world map just outside. Breed your two Chocobos using a

Carob Nut and you should receive either a Green or a Blue Chocobo. In order to breed your two Chocobos again you will need to fight at least ten battles without running away. Save your game before you attempt to breed them again as your Great/Good Chocobo combination will get you both your Green and your Blue Chocobo.

You need to receive the opposite color and gender of your previous Chocobo so that you can breed the Blue and the Green. Reset the game using a soft reset (by holding L1, L2, R1, R2, Start and Select at the same time) and then try again until you succeed. 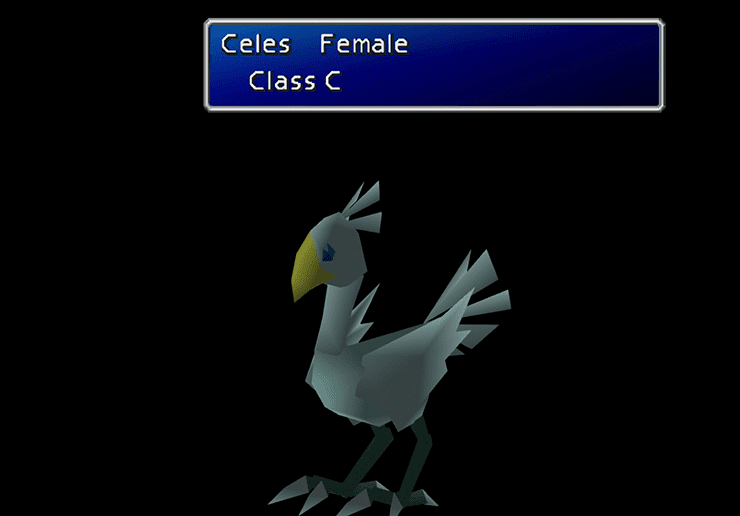 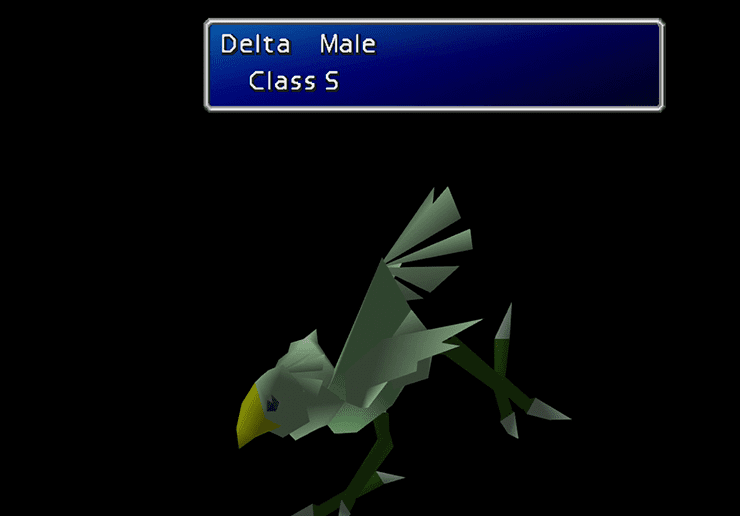 You need a Blue and a Green Chocobo of opposite genders in order to breed a Black Chocobo. In order to maximize the odds of breeding a Black you need to win approximately 9 races between your two Chocobos.

The Green Chocobo is the best one to race as it doesn’t slow down when racing through the space station section of the race track like all of the other Chocobos do. Feed your Green Chocobo around 10

Sylkis Greens and return to Gold Saucer to win the races.

Chocobos that you breed will not be old enough to breed themselves until you have engaged in somewhere between 3 to 18 battles (without running away). Complete the battles and then save your game outside of the Chocobo Farm. Breed the Green and the Blue Chocobo using a

Carob Nut and you should receive a Black Chocobo. 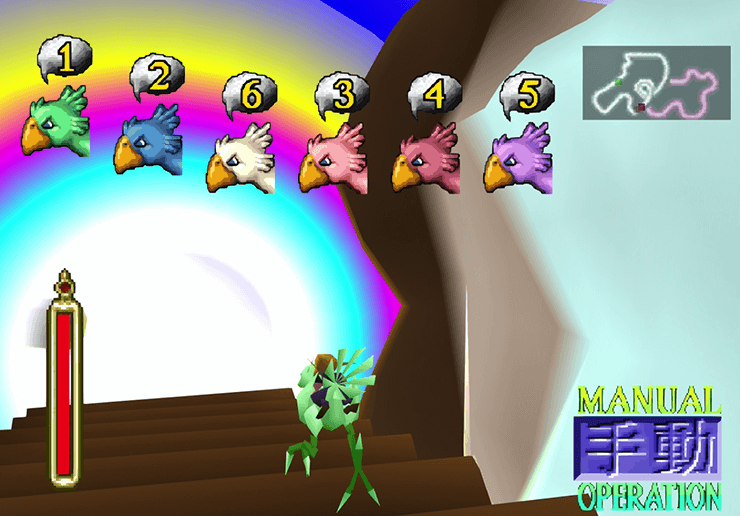 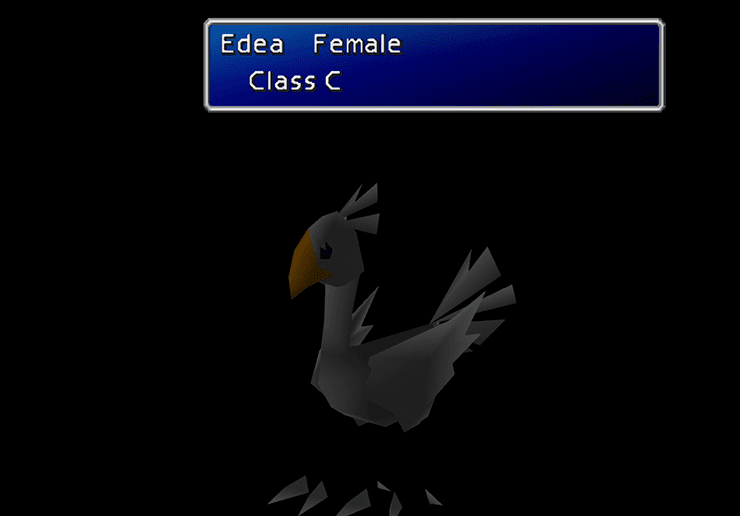 In order to breed a Gold Chocobo you will need to breed your Black Chocobo with a Wonderful Chocobo. Wonderful Chocobos can be captured on the tracks near the Icicle Inn. You can land the Highwind close by on the non-snowy parts of the continent. 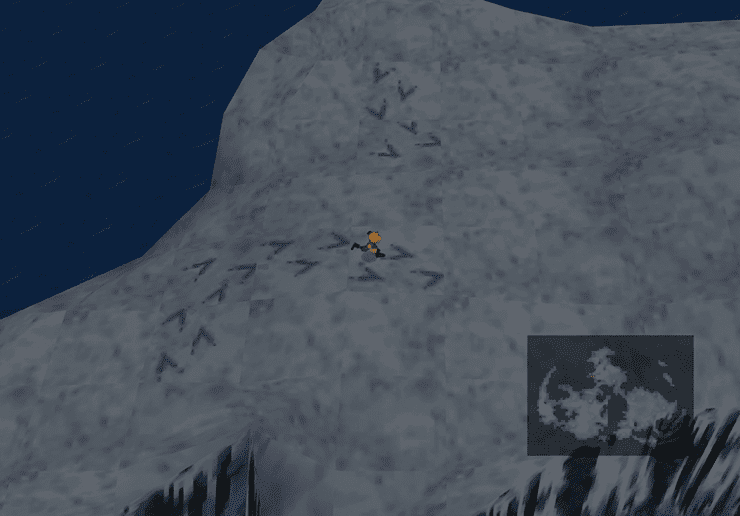 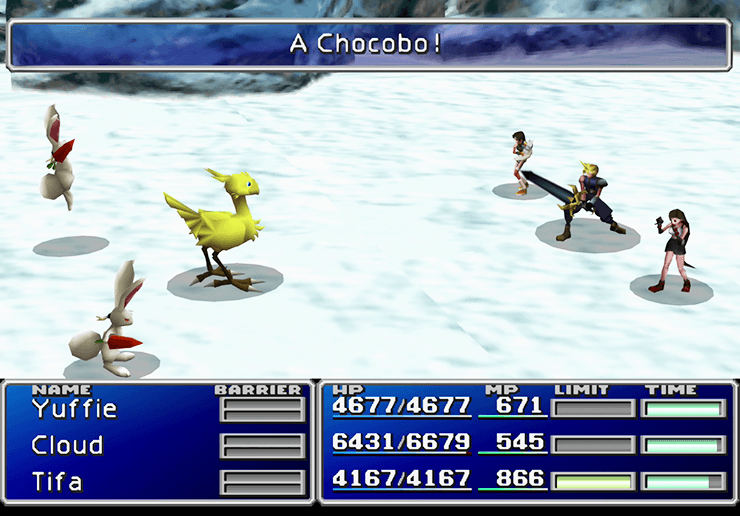 You need to win 12 races between your Black Chocobo and your Wonderful Chocobo in order to guarantee that you receive a Gold Chocobo. It can be fairly difficult to win races in “S" class after you have won 9 races on either of your Chocobos so be prepared to have to race both of them.

Zeio Nut and do another soft reset until it works. Note that some players have reported that they were only able to obtain a Gold Chocobo by selecting the Black Chocobo first so give this a try if you run into any problems. 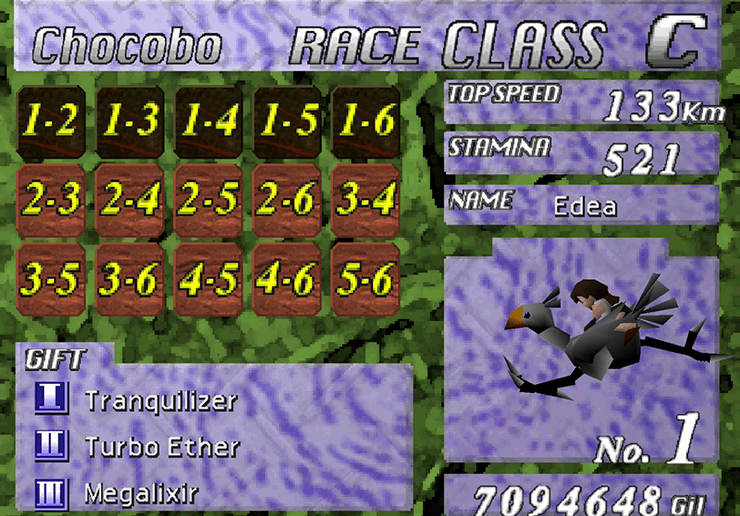 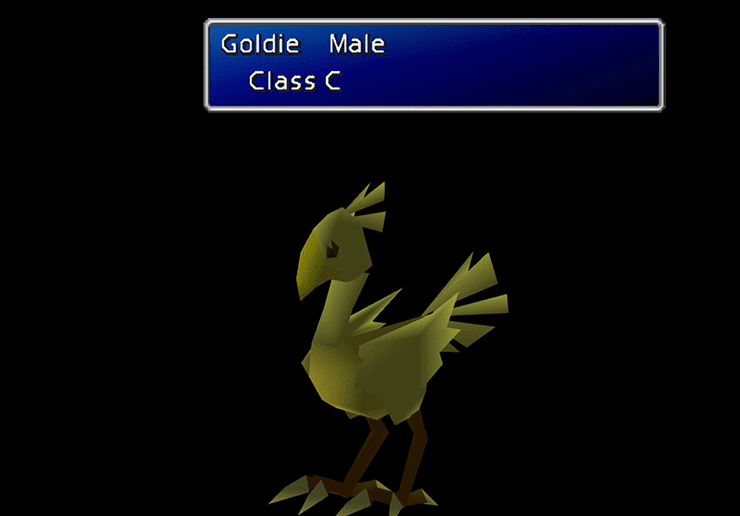 Congratulations! You are now the proud owner of a Gold Chocobo. The Gold Chocobo can travel anywhere on the World Map including across oceans. This includes a number of secret areas around the game such as the Materia Caves. Check out the Materia Caves side quest section below for more information:

Materia Caves
Use your Chocobos to cross into areas that previously could not be reached to find Materia Caves with valuable treasure. 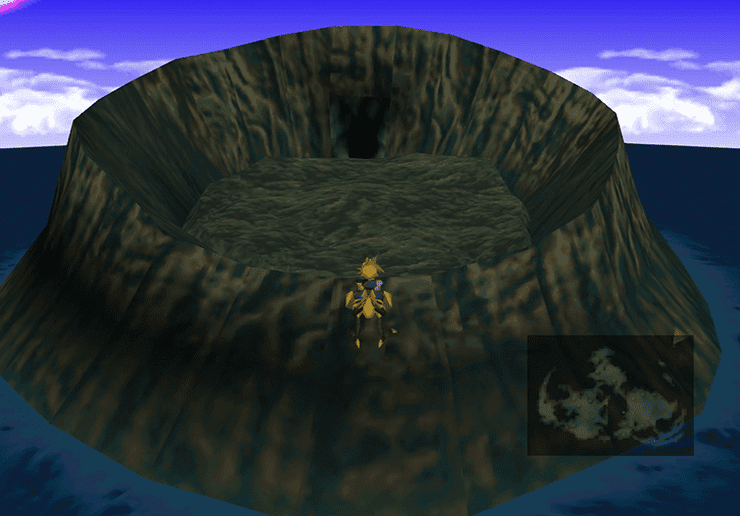 Your Gold Chocobo will have the highest stats of any of the previous Chocobos you raised. This makes it ideal for racing in Chocobo Square to obtain all of the top prizes.