This portion of the guide is for the second visit to Junon on Disc 2. If you are on Disc 1 and have not been to Junon yet you should check out the Junon section on Disc 1. 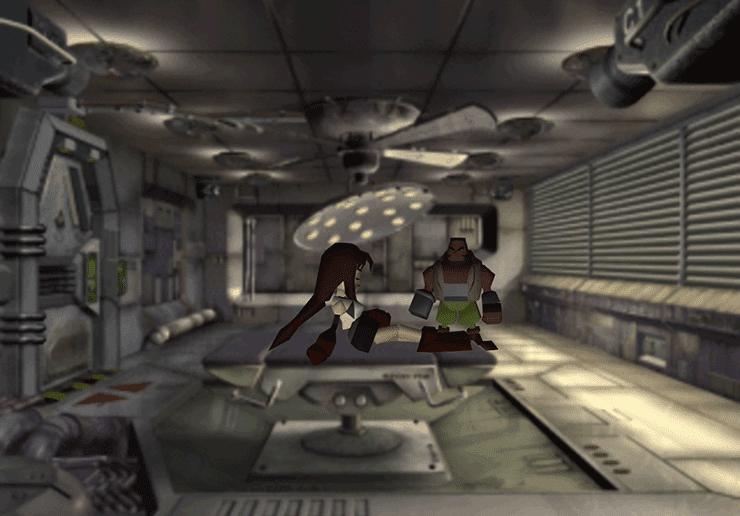 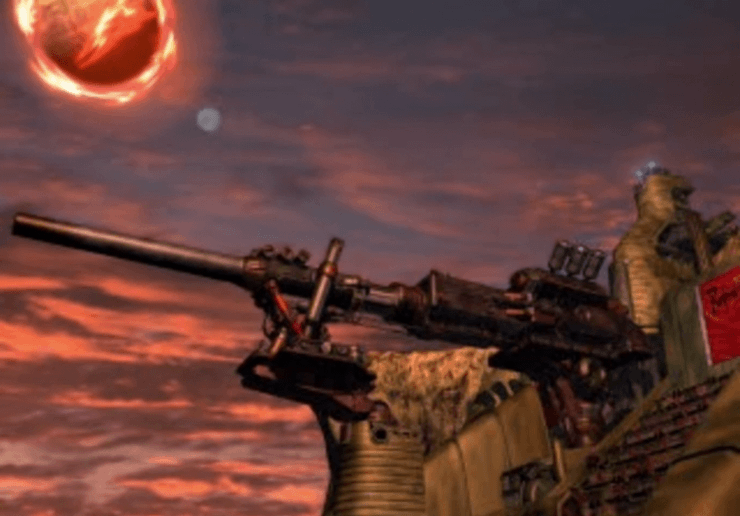 Tifa and Barret will awaken in a cell somewhere inside Junon. They are to be executed for somehow causing the summoning of Meteor.

Follow the group of Shinra Guards and Tifa along through Junon. There is a

Save Point part way along the path that you can use but there is nothing else that can be done for now besides following Tifa.

Note: Take this time to arm Barret with weapons, armor and some Materia for some upcoming fights that he will have to partake in. 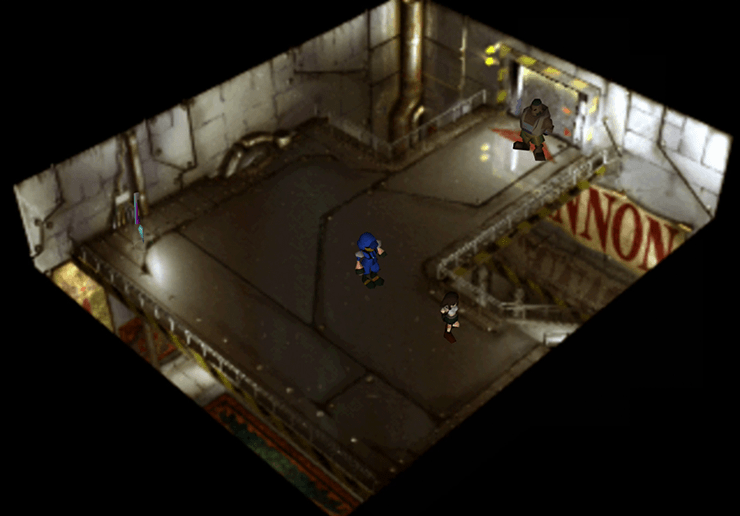 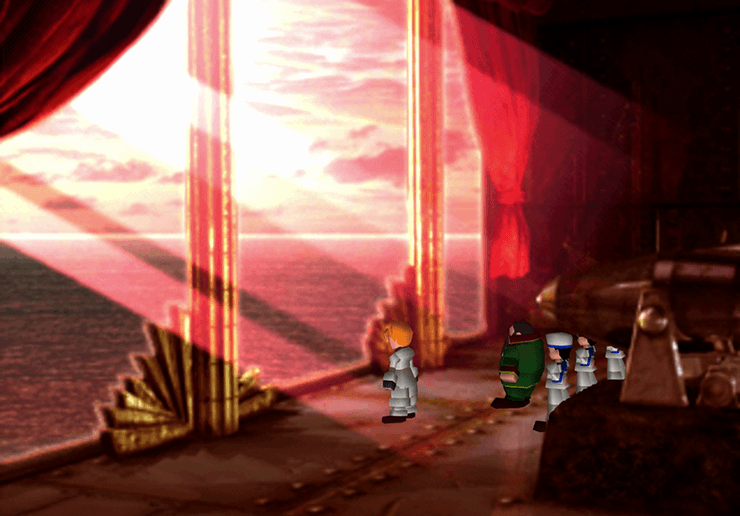 The alarm will sound in the press conference room and Cait Sith and Barret will be thrown into battle against two Shinra Attack Squad Guards. This fight can tend to be fairly long and drawn out if you do not have any Materia equipped on either Barret or Cait Sith.

X-Potions out of your inventory if you run into trouble.

Cait Sith will free Barret who will then attempt to free Tifa from her cell to no avail. Following that there will be a few more cinematic scenes involving Junon, the big cannon (aka the Sister Ray) and Weapon. 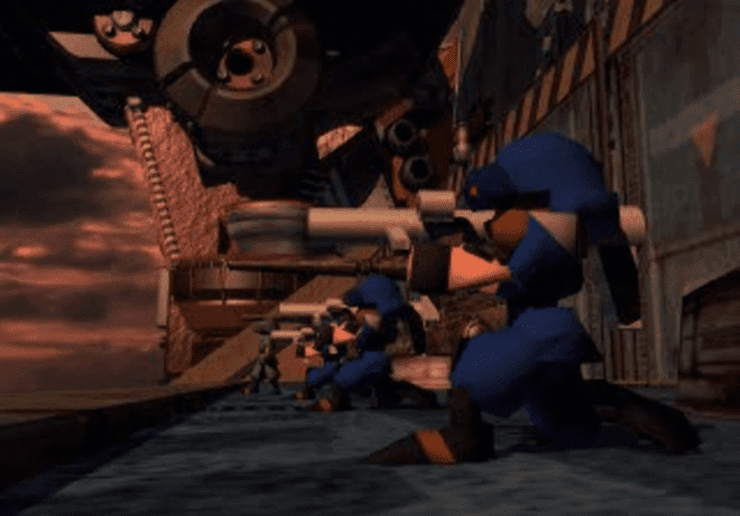 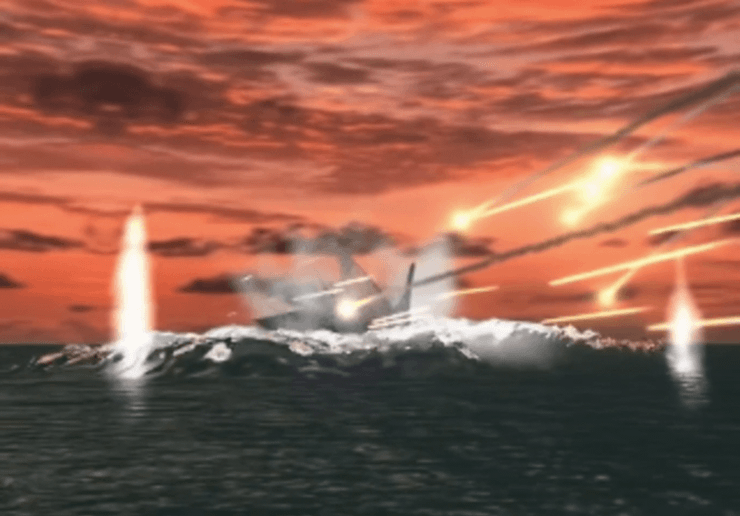 Once you regain control of Barret take a few minutes to properly equip Barret and Cait Sith with at least some weapons and Materia before you speak to Cait Sith near the entrance/exit.

Take a right when you get outside of the press room. Speak to the woman dressed up like a reporter as you pass to find out that it is actually Yuffie in disguise. Another short cutscene will follow while you speak to her and she will join your party. 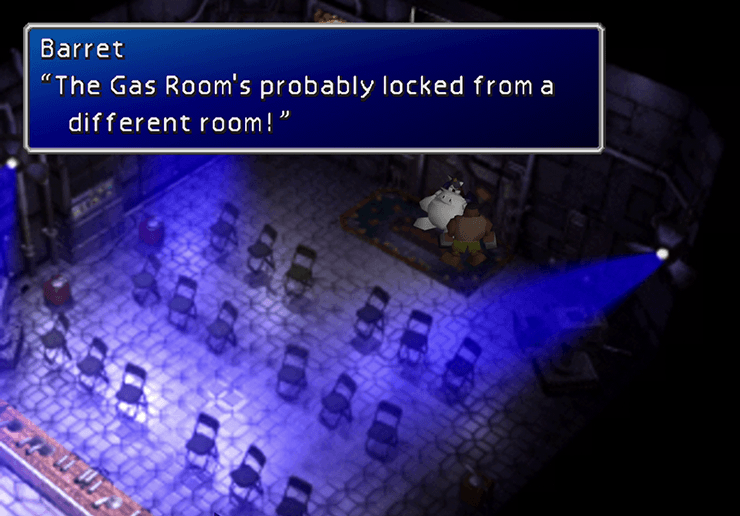 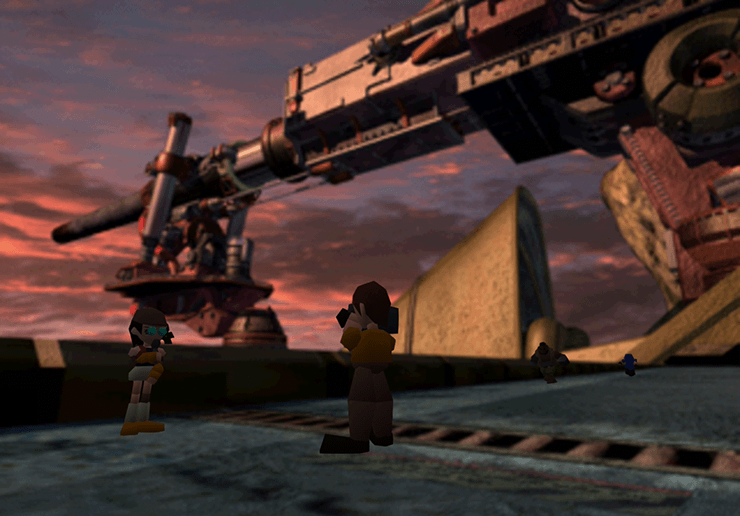 Continue towards the camera until you reach the Junon Airport pictured in the screenshot below. Use the yellow control panel to raise the platform up to the top level and then run towards the huge airship off in the distance to continue the story. 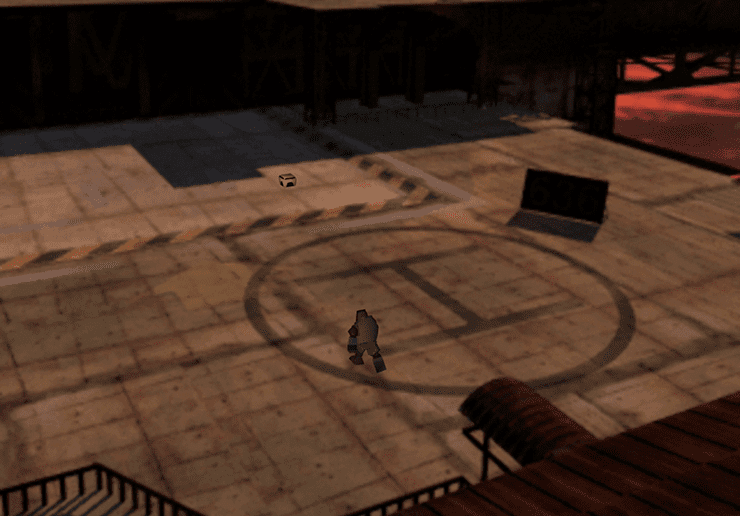 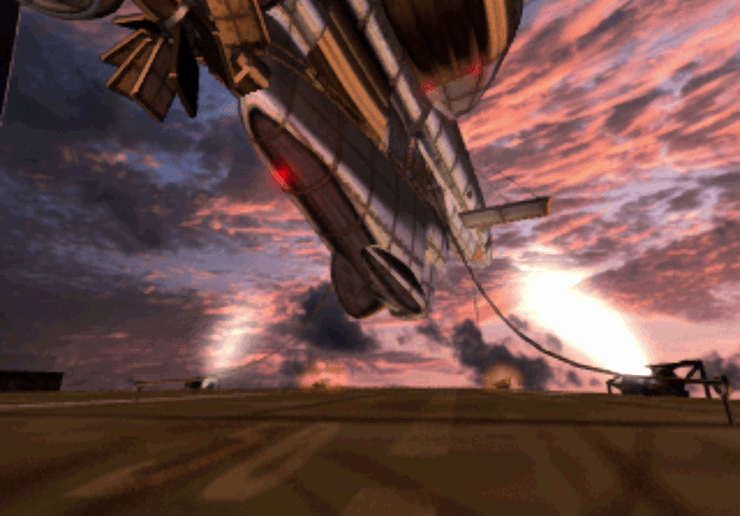 The story returns back to Tifa who is slowly being gassed in the execution chamber. There is no time limit for completing these actions as Tifa can apparently hold her breath forever. In order to get yourself free you will have to press the following buttons:

Button twice to bring the key closer to Tifa
-

Button to have her sit back in the chair
-

Button to unlock the opposite hand.

Press the orange button on the left side to stop the gas from pouring out. Try to open the door from the inside for another cutscene involving Weapon. Tifa will climb out of the opening in the hole. 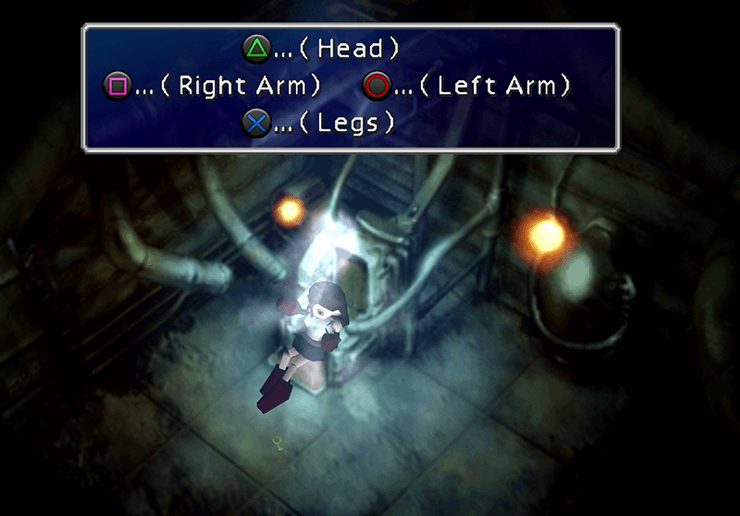 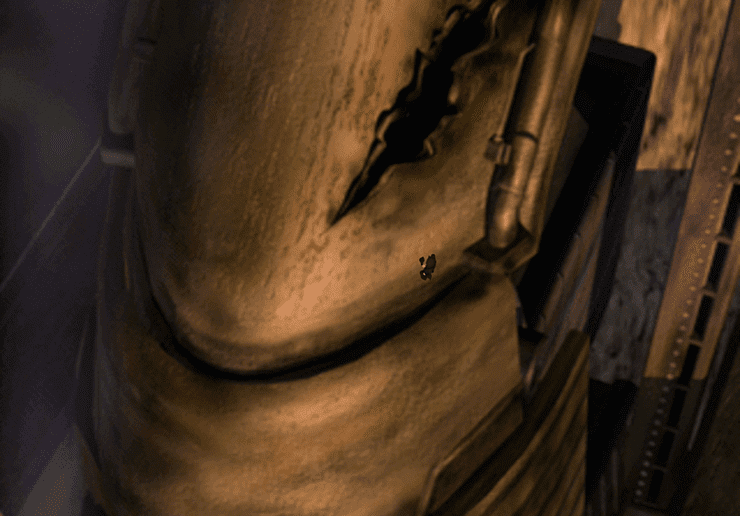 Travel down towards the end of the cannon with Tifa. Scarlet will corner Tifa once she reaches the end. A short fight will ensue between the two of them - just press Circle as many times as you can in an attempt to win the fight, but there are no consequences to winning or losing the bitch slap contest. 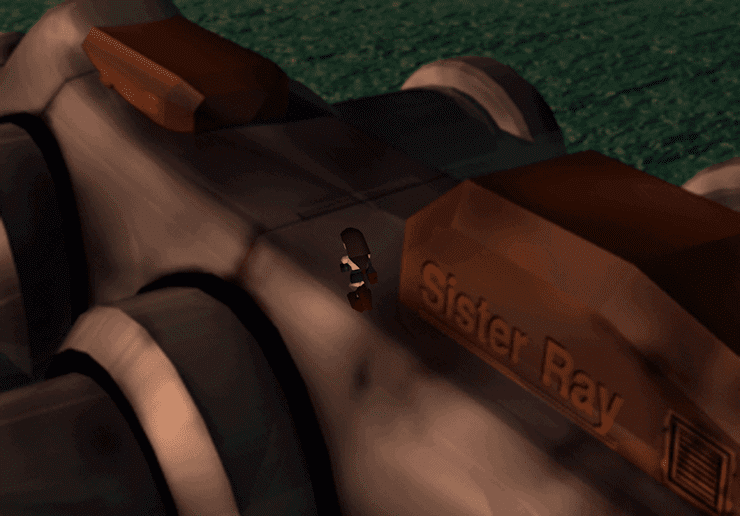 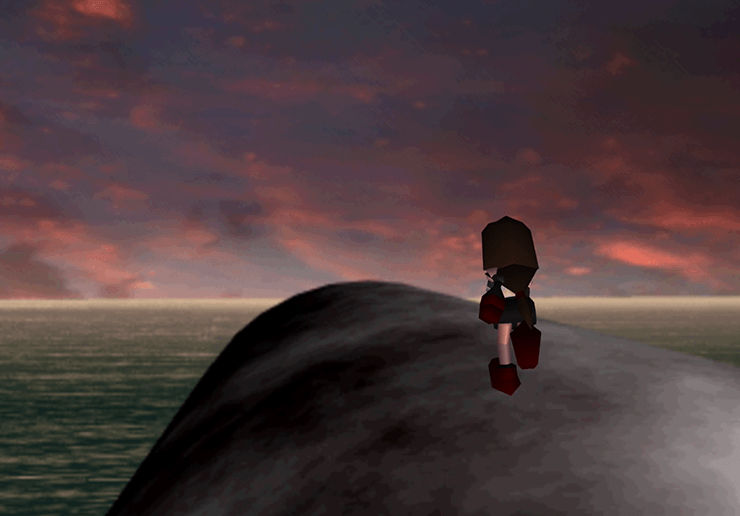 Barret and the rest of the crew will show up just in time to save Tifa off the edge of the cannon in their fancy new Airship, the Highwind. Travel down to the lower floor and follow Barret and Cait Sith towards the cockpit. 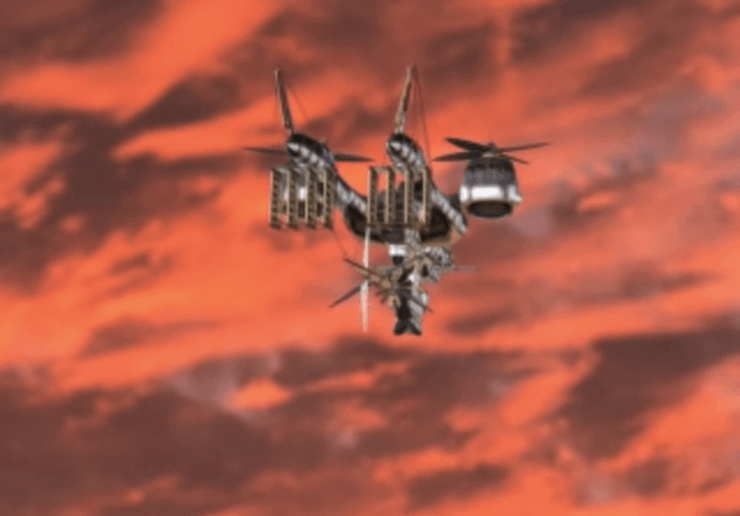 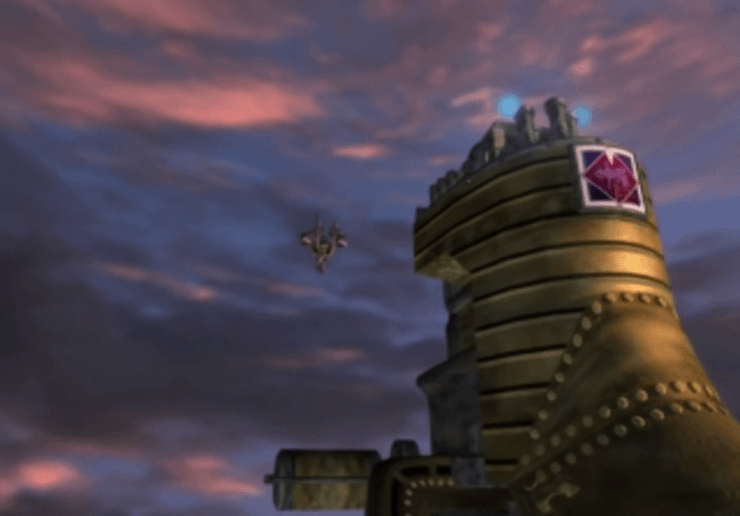 You need to speak to Red XIII, then to Cid near the wheel and then talk to the co-pilot standing at the wheel. Cid will tell you to go to the operation room which is located back outside the Cockpit near the back of the main floor (shown in the screenshot below).

Talk to the man on the left to form your party - speak to him again and you can refill your HP/MP or save your game. 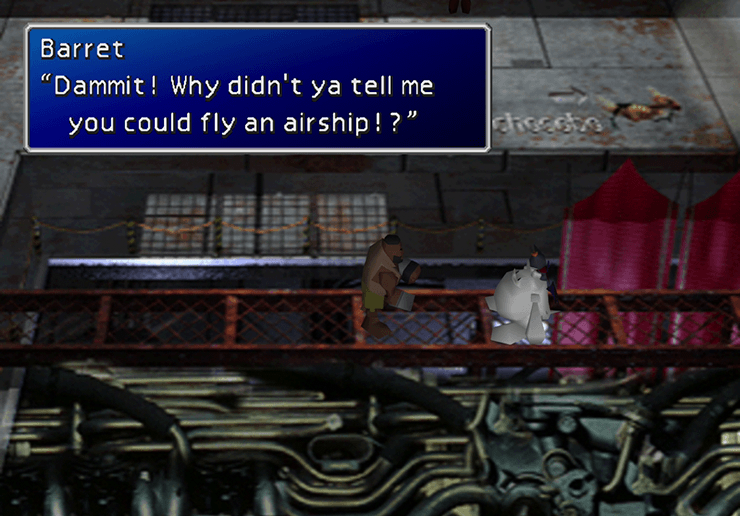 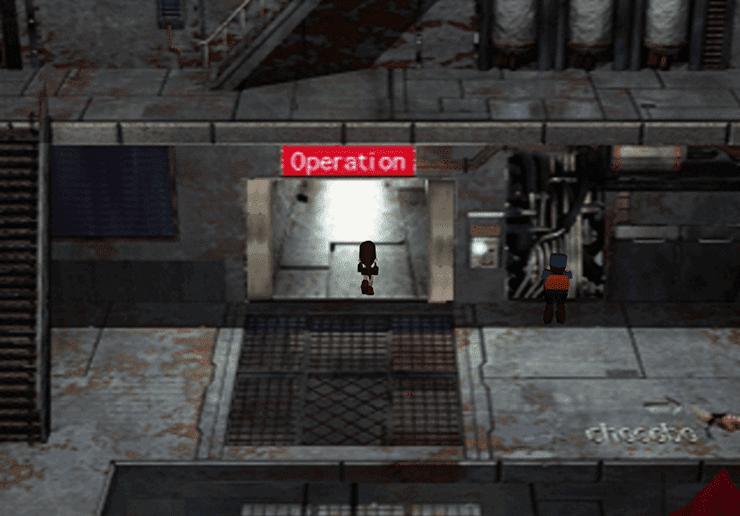 Speak to the co-pilot in the cockpit next to Cid again to gain control of the Highwind. You can now fly all over the world map! 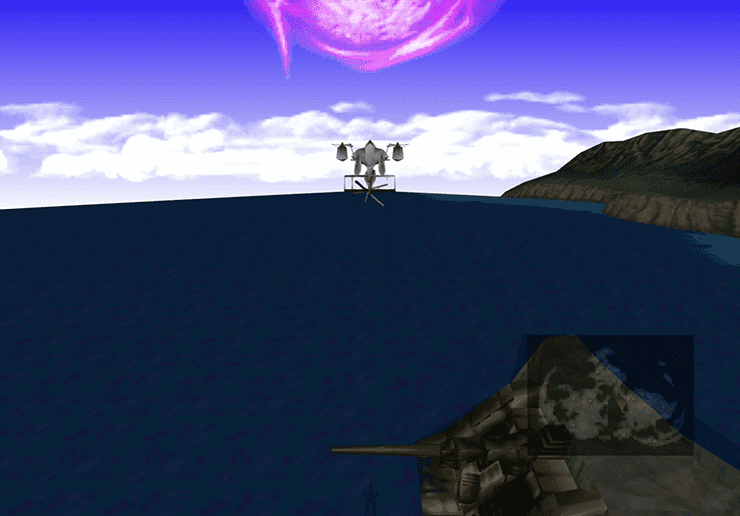 The next official stop is Mideel but there a number of side quests that you can do before hand. Each of these are listed on the next page.