You start the game in the city of Zanarkand. Walk towards the group of people gathered outside of the house and you will be provided with the option to choose a name for the main character.

The main character’s default name is Tidus and this guide will refer to him as Tidus throughout. 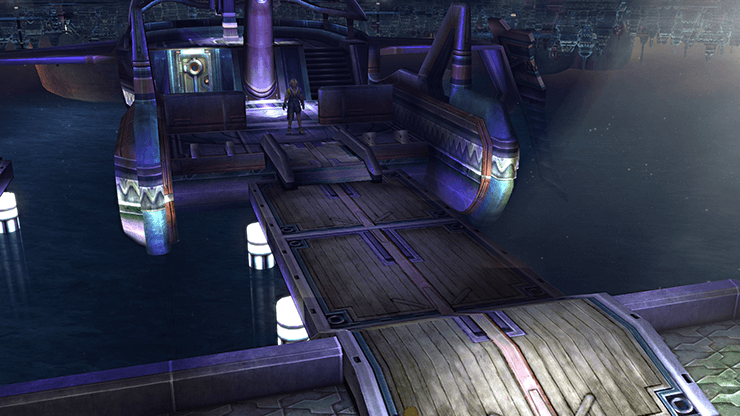 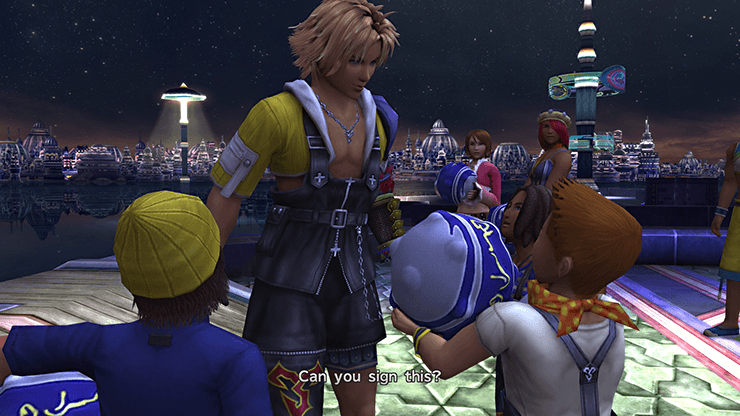 You can now wander around and talk to the people that are loitering on the street outside of Tidus’ house. Talk to the two girls on the right side of the screen and the group of kids on the left.

The two will ask for Tidus’ signature while he schmoozes them up. The group of kids will do a strange prayer (the “Blitzball sign for Victory”) and ask Tidus to “teach them how to Blitz!”. 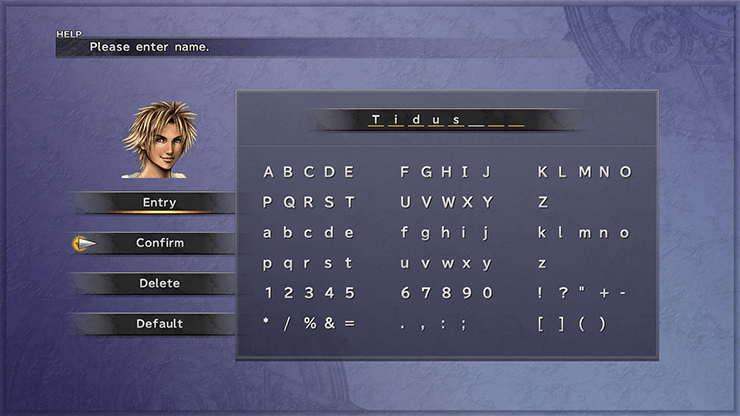 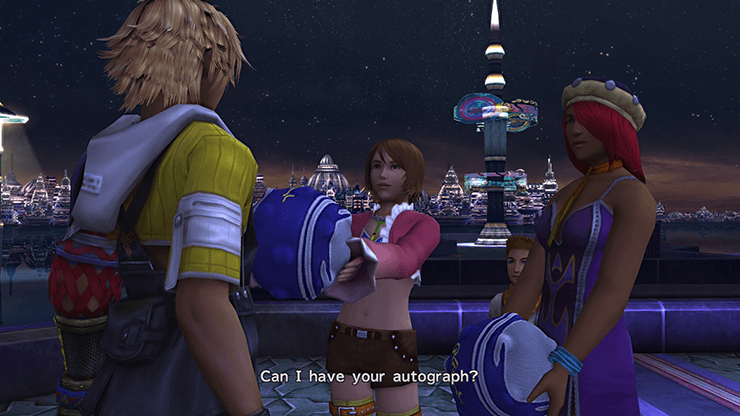 Walk down the long roadway while you listen to the announcers reminisce about Jecht and talk about the upcoming Blitzball game. There is no point talking to any of the people along the road.

Continue into the building, through the crowd of cheering fans, once you get to the next area. 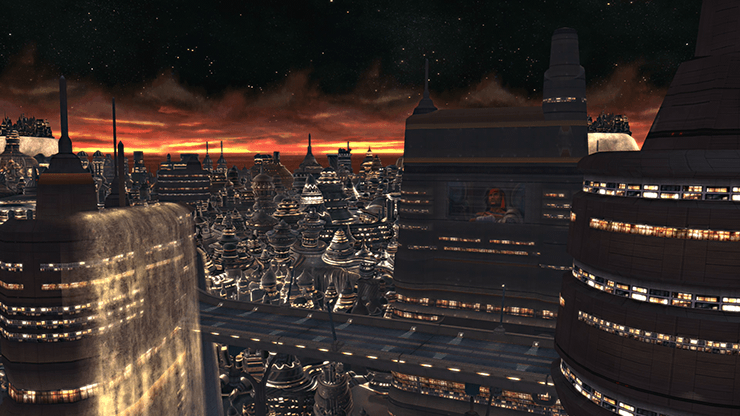 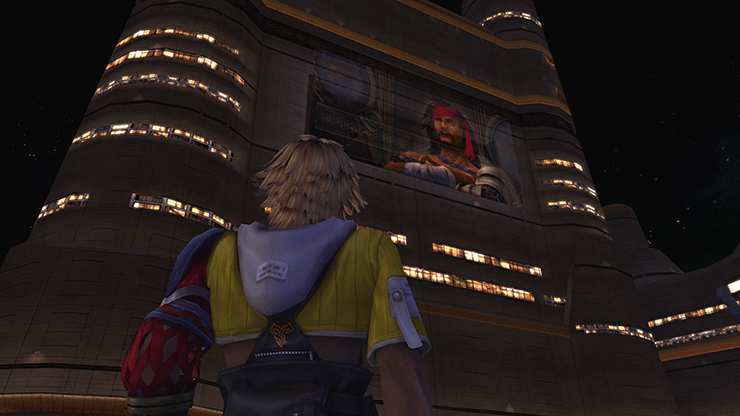 A few more cutscenes will take place setting the framework for the rest of the story. The city of Zanarkand will be attacked by a strange, gravity-altering enemy while Tidus plays Blitzball in the arena. As this happens, Auron, the man with dark glasses in the red trench coat, will be slowly walking towards the stadium. 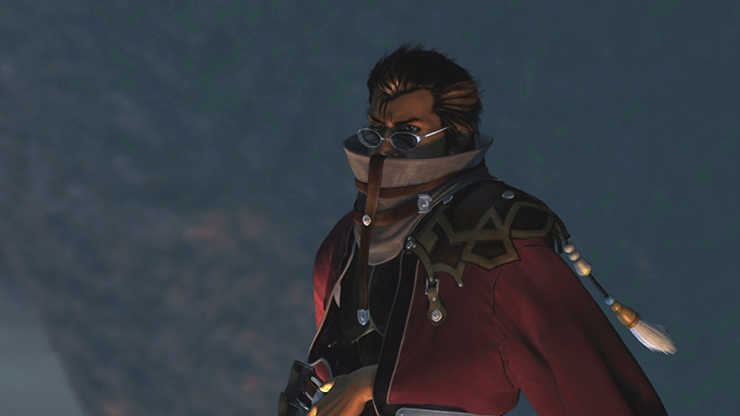 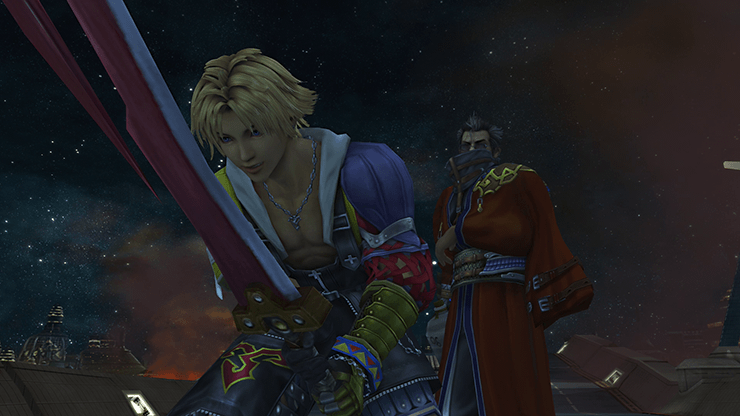 Go south once the cutscenes have concluded. Refer to your mini-map if you have questions about which direction “south” is as it may not be easy to tell when looking at the screen. Follow Auron down the roadway. 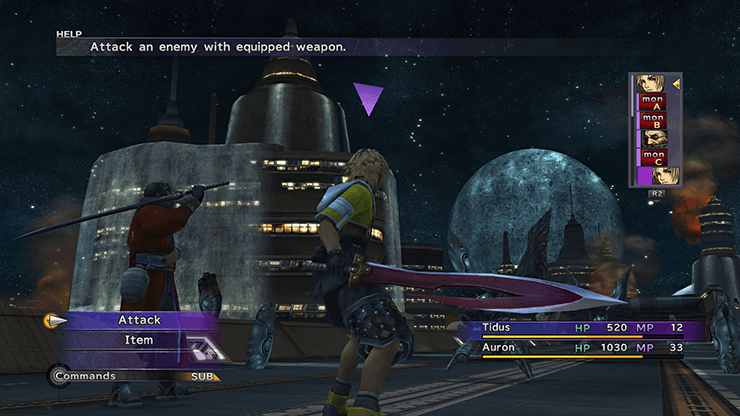 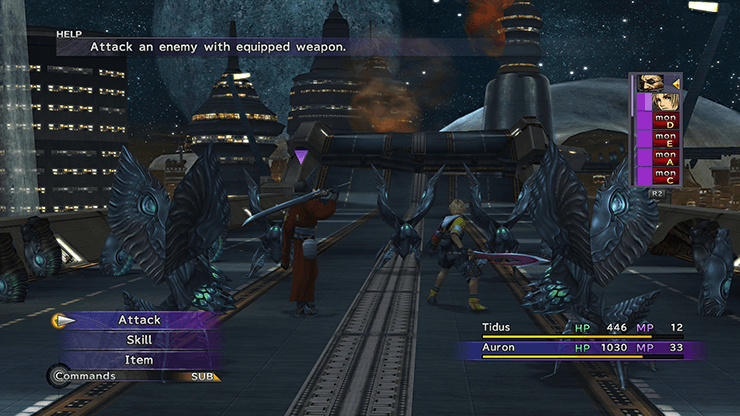 The battles against the Sinscales are easy enough. Just use the “Attack” command to break your way through. Don’t waste your time using Auron’s Skill commands or his

Power Break ability. The Sinscales are far too weak for that move to be useful.

Auron starts this battle off with a fully charged Overdrive meter. Check out the Overdrives section for more information on how an Overdrive works.

Essentially though Overdrives replace the Limit Breaks seen in previous games in the Final Fantasy series. All you have to do is press 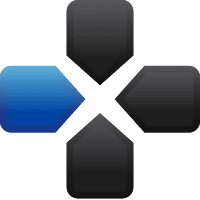 Button on the control pad to view Auron’s Overdrive moves which are called Bushido. Dragon Fang is the only Overdrive Auron will have available. Select it and the move will automatically target all enemies. 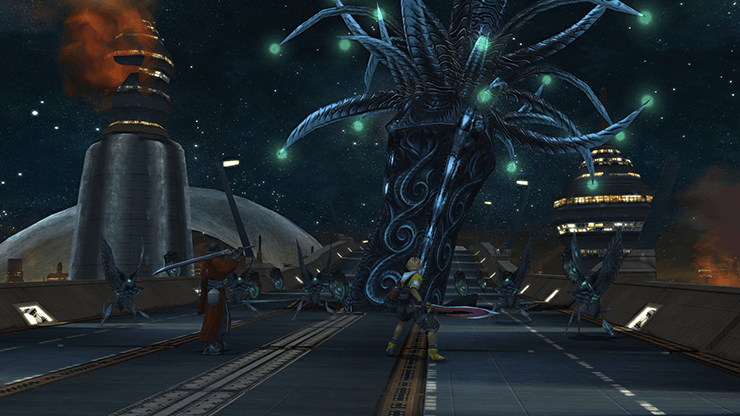 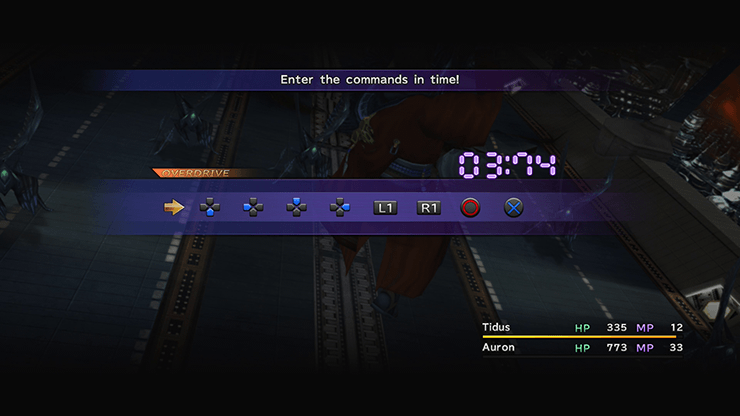 A window will pop up as soon as you use Dragon Fang indicating the button combination that you must press. All of the enemies will still take damage even if you mess up the combination, and even an unsuccessful Dragon Fang attempt will cause enough damage to kill all of the Sinscales. This will leave only the Sinspawn Ammes boss left that you have to defeat.

The only move that Sinspawn Ammes can use is Gravity, which deals an amount of damage based on a percentage of each character’s health. It will reduce both Auron and Tidus’ health by approximately 25% each time that it is used which means that it can never actually kill either player.

Button as the marker moves over the highlighted area of the bar shown below. You have multiple tries at this, so don’t fret. 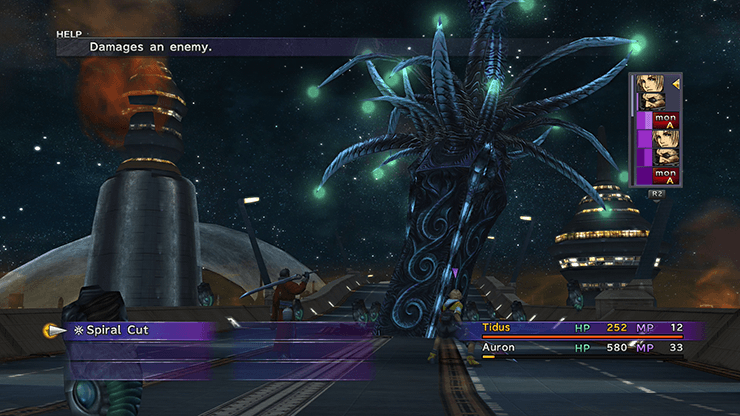 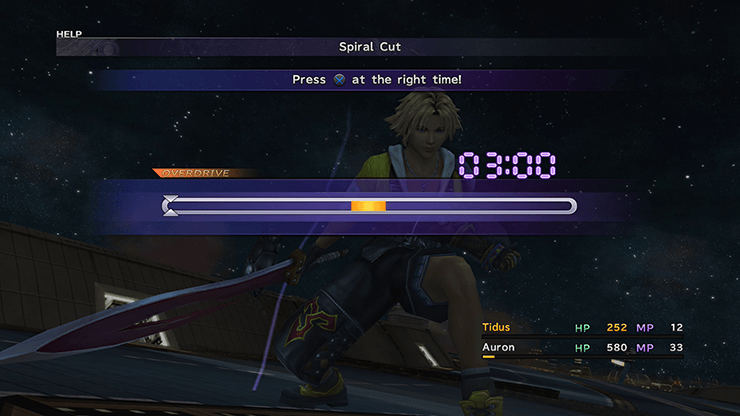 Continue attacking Sinspawn Ammes until you defeat it and don’t worry about wasting any Potions to refill your health since it can’t kill you.

Follow Auron down the road and save at the Save Sphere at the bottom of the screen. It may be a little bit early to save your progress, but if nothing else, the Save Sphere will refill your HP and MP. Get in the habit of touching them whenever you have an opportunity. 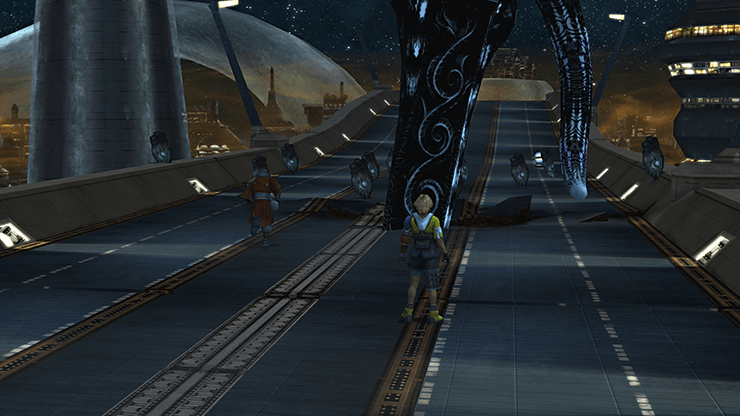 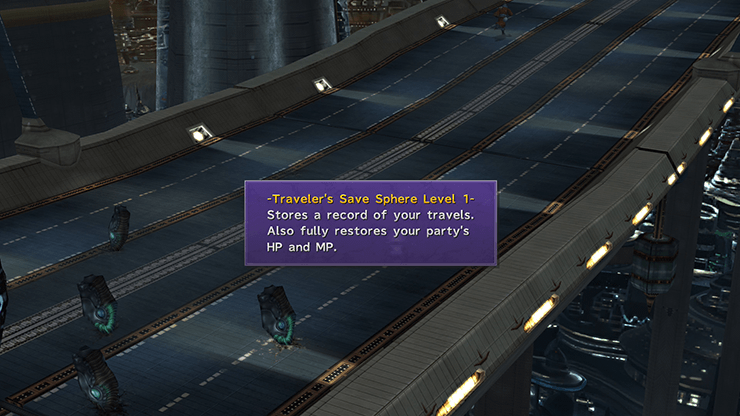 In the next battle Tidus and Auron will find themselves surrounded by Sinscales. Each time you defeat one another one will come in and take its place.

The best strategy for this fight is to focus in on any of the Sinscales if their wings begin to flicker (which means that they are charging to use a more powerful attack). A cutscene will trigger once you have killed enough of them. 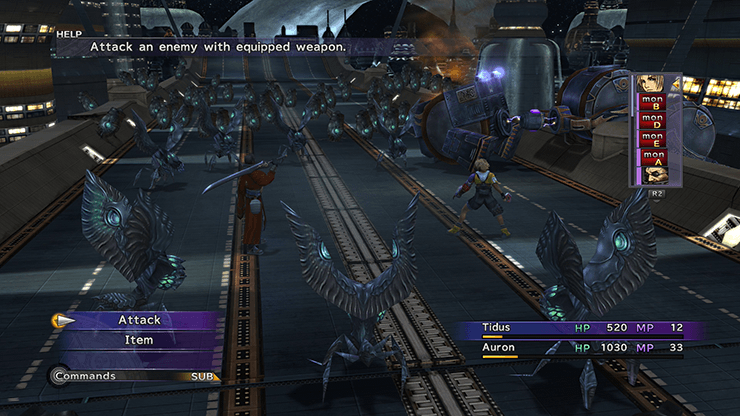 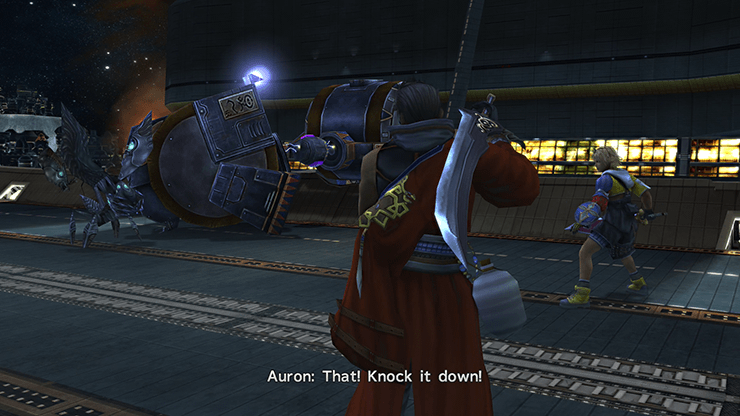 Auron will direct Tidus to attack the ‘Tanker’ off to the right side of the screen. As soon as he does, both Tidus and Auron’s attacks should be focused on the Tanker only. Five hits to the Tanker will end the fight. 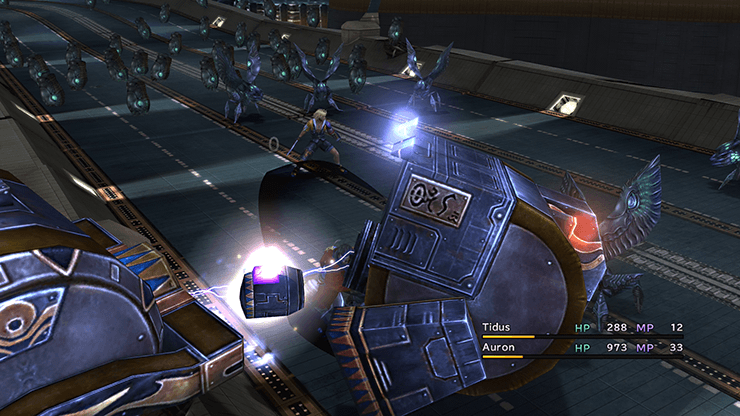 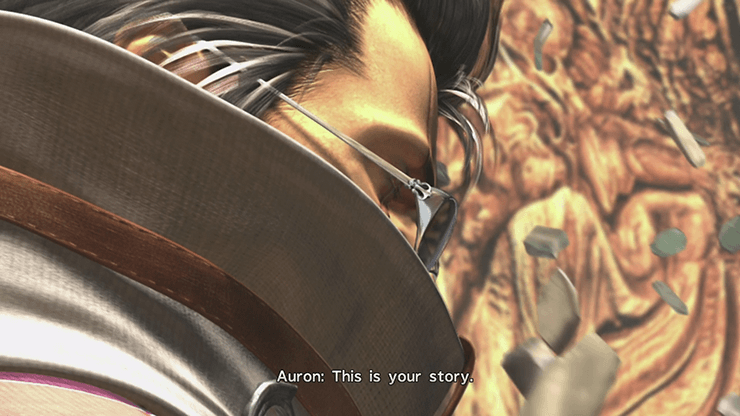 The building next to the roadway will collapse before both Auron and Tidus are absorbed by the strange creature attacking Zanarkand. The next scene involves a dream-like sequence with Tidus floating in the center of a colosseum-like structure.

Button to descend as indicated on the screen, and then swim over to Jecht (standing on the platform in front of Tidus).

Another dream-like sequence will take place. 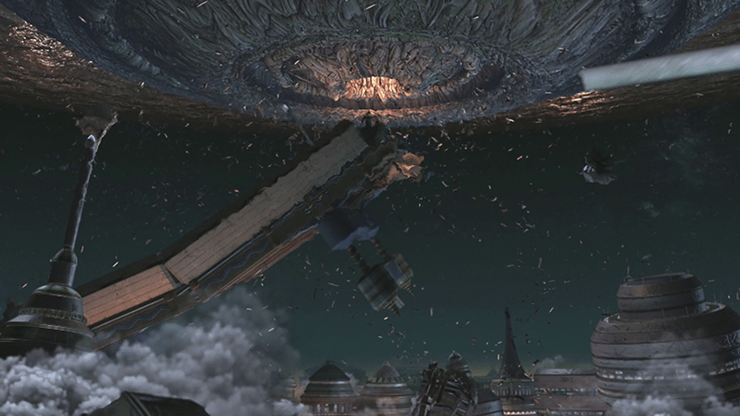 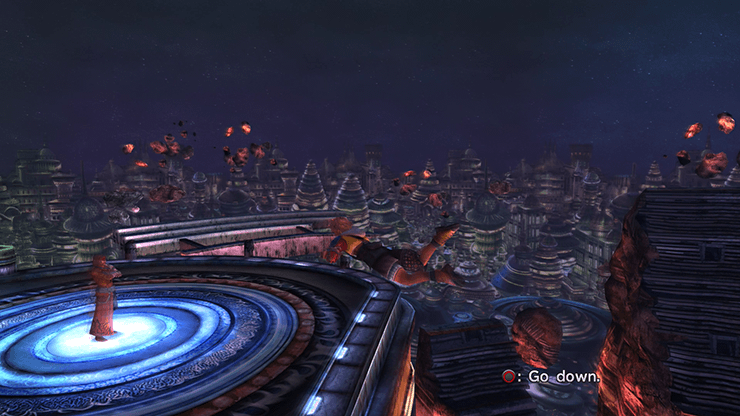