The Wutai Pagoda side quest can be done on Disc 1, Disc 2 or Disc 3, however if you attempt to complete it on Disc 1 or Disc 2 you will have to go through the process of having Yuffie steal your Materia and attempting to get it back. Check out the Wutai side quest section for more information:

Wutai
Getting your stolen Materia back from Yuffie. 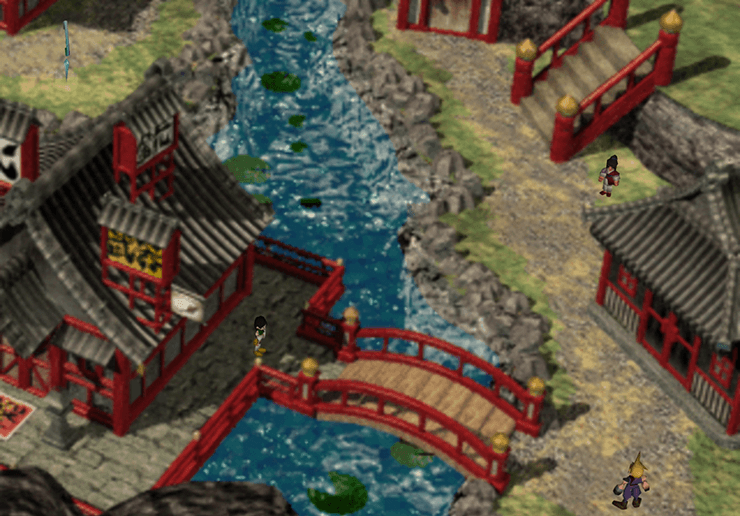 To begin the quest, travel to Wutai and make sure that you have Yuffie in your party. Read the Secret / Optional characters section if you do not yet have Yuffie as a member of your team. Travel to the Wutai Pagoda area near the back of Wutai shown in the screenshot below. 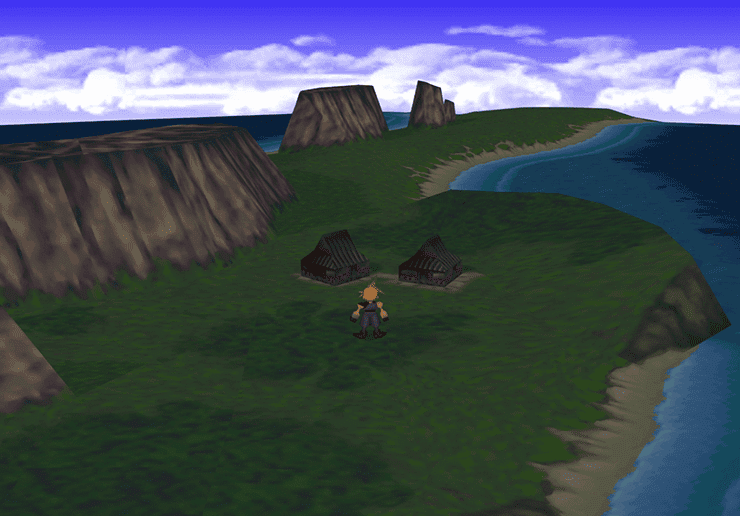 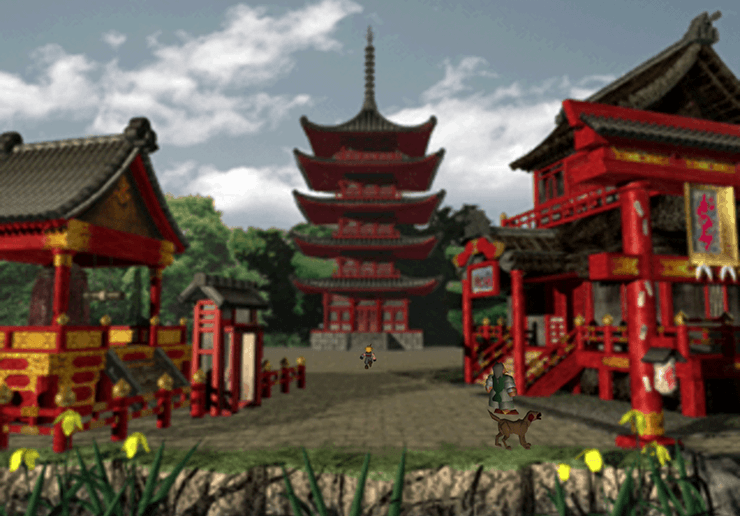 Yuffie will be going through this trial by herself and will be facing each of the upcoming opponents alone in battle. With that in mind, you should take some time to ensure that she is appropriately equipped.

Some important Materia that she should have includes:

Enemy Skill Materia with the Big Guard and Aqualung skills

Make sure that you place her in the back row as she is a ranged attacker who can still inflict maximum damage from the back row.

Speak to the man and tell him that you would like to climb the Pagoda today. Your first fight is against the Sacred Gorky, who is listed as Gorkii in the battle screen.

Note that the fights listed below may be much easier depending on what point in the game you attempt to complete the Wutai Pagoda.

The strategy for most of these fights will be exactly the same. Make sure to use Big Guard early on in the fight. Keep Yuffie’s HP replenished as Gorky’s damaging spells will hit for quite a lot of HP. Gorky’s power will be used up fairly early so this is essentially a fight where you can just outlast him. 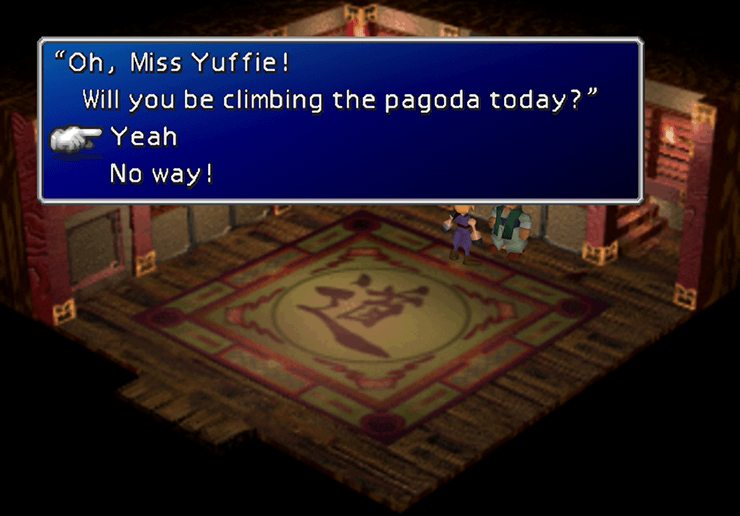 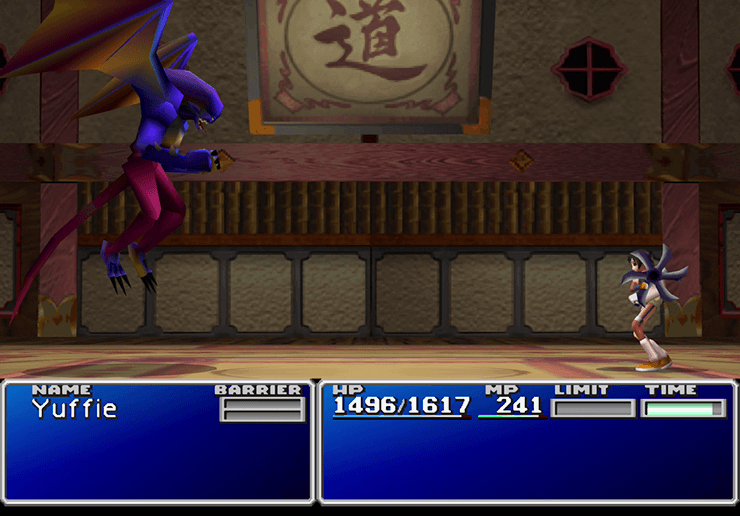 Travel up to the next floor once the battle has concluded. Don’t forget to heal Yuffie up in preparation for her next fight. The next fight is against a young boy named Shake.

Shake will put Yuffie under a status effect called Fury. Fury will cause Yuffie to take more damage but will charge her Limit Breaks faster. It does not take much to bring Shake down but be prepared to heal Yuffie as his attacks come fairly quickly. 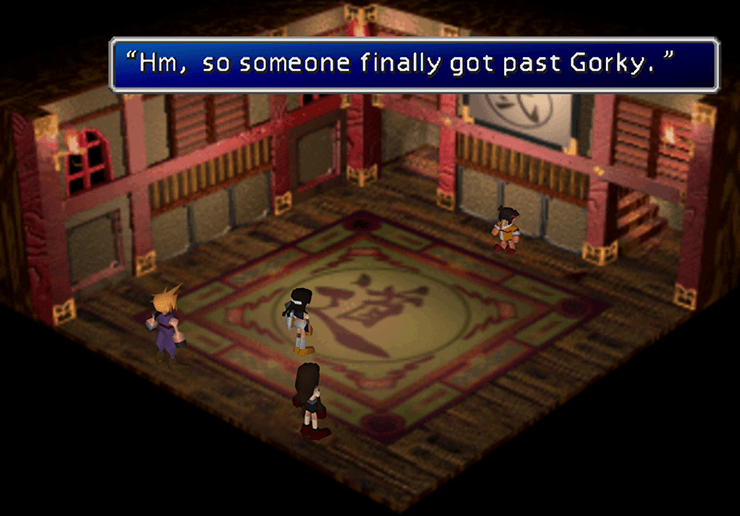 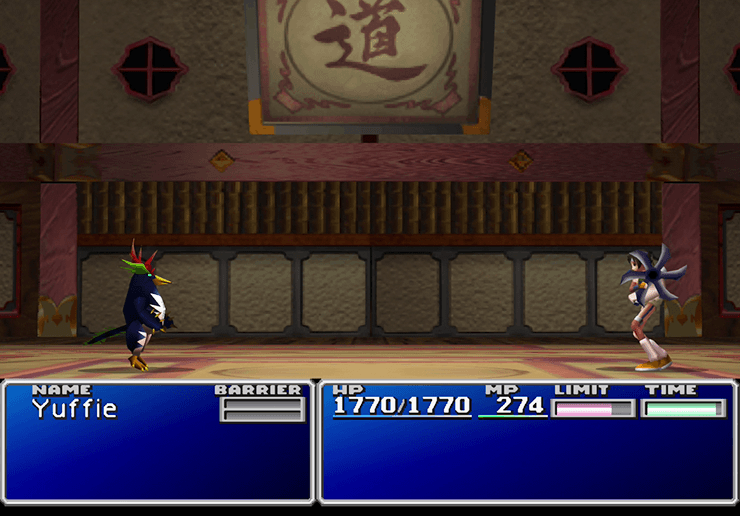 Heal Yuffie up and have her equip the

Jem Ring accessory (which you would have won off the Materia Keeper in Mount Nibel) in preparation for the next fight. Speak to Chekhov on the third floor to get the next battle started.

Chekov has very little HP but his Stare Down move, which should be nullified by the

You can also use the Bio spell from your

Poison Materia on Chekov which causes him to still take damage even if Yuffie’s actions are slowed. 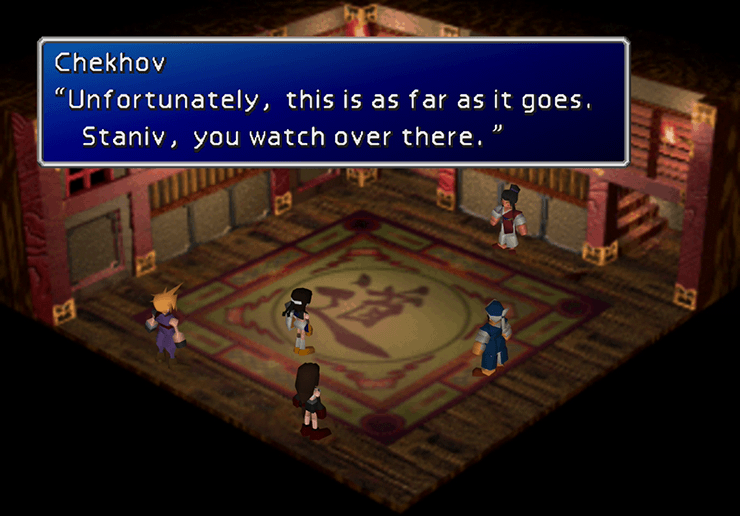 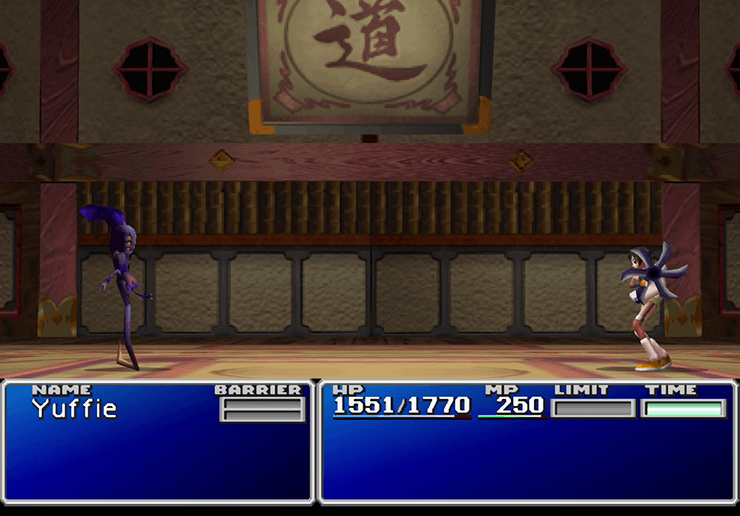 Travel up to the fourth floor once the battle with Chekov is complete. No preparation is required for the fight against Staniv. Remember to remove your

Jem Ring though if you equipped it in preparation for the last battle.

Staniv will only use regular attacks which makes this a breeze of a fight.

Counter Attack Materia will help speed things up and make sure to keep Yuffie’s HP healed up. 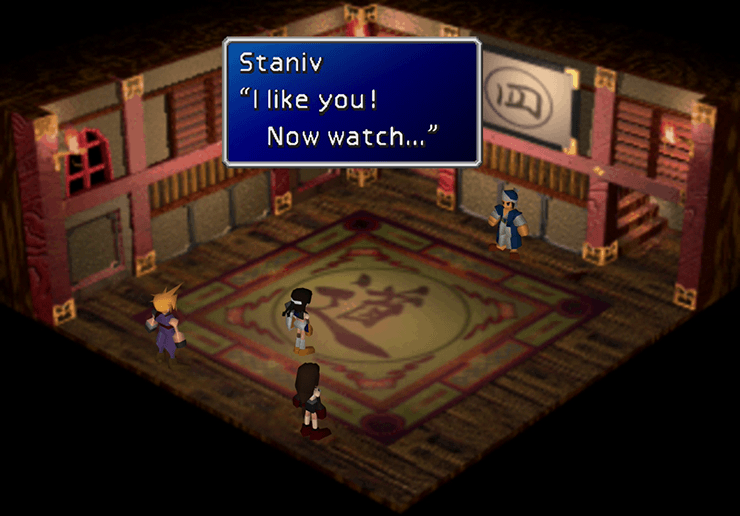 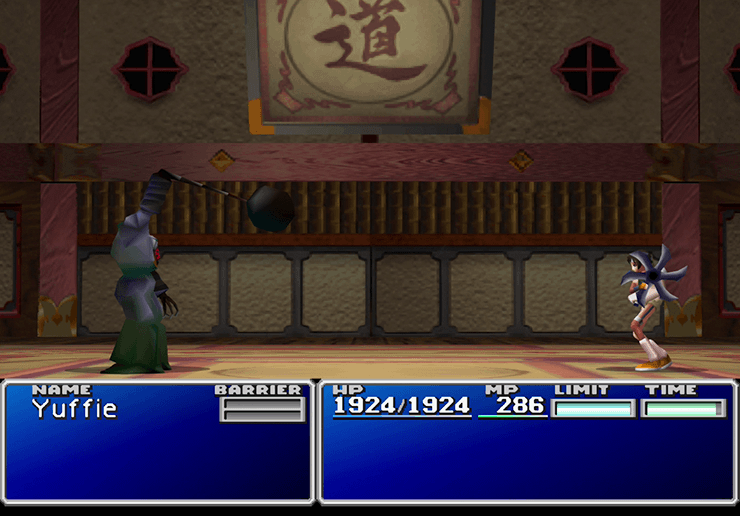 White Cape accessory before hand to prevent Godo from casting Mini/Small on Yuffie.

You should also equip each of the

Enemy Skill Materia that you possess (assuming you have room for them) as Godo will cast a move called Trine which is fairly difficult to acquire. There is only one more point in the game where you will be able to obtain it.

Godo can be a little bit more complex of a fight. He uses gravity-based attacks which will take a percentage of Yuffie’s HP away. Be sure to keep her fully healed and to keep Big Guard up for the duration of the fight.

Once Godo is below 40% HP he will begin using Cure2 as a counter attack which can make the battle extremely difficult if you are unable to deal more damage than he heals for (~1200 HP). There are a few options that you have to counter this problem.

The first option is to rely on

Counter Attack Materia to do the remaining damage to Godo each time he attacks you as he will not counter a counter attack. You should also save up your Limit Breaks for the last half of the fight and use Bio or Bio2 from your

Poison Materia on him early. Damage from Poison will not cause him to counter with Cure2 and is one of the most efficient sources of damage in this fight based on how much HP Godo has.

Deathblow to ensure that your attacks are either critical hits or are inflicting as much damage as possible without allowing him enough time to use Cure2.

Remedy. The only alternative is to equip the

White Cape accessory before the fight.

Godo is also one of the few places that you can learn the Enemy Skill called Trine. It is a good idea to have Yuffie equip one or all of the Enemy Skill Materia that you posses during this fight. 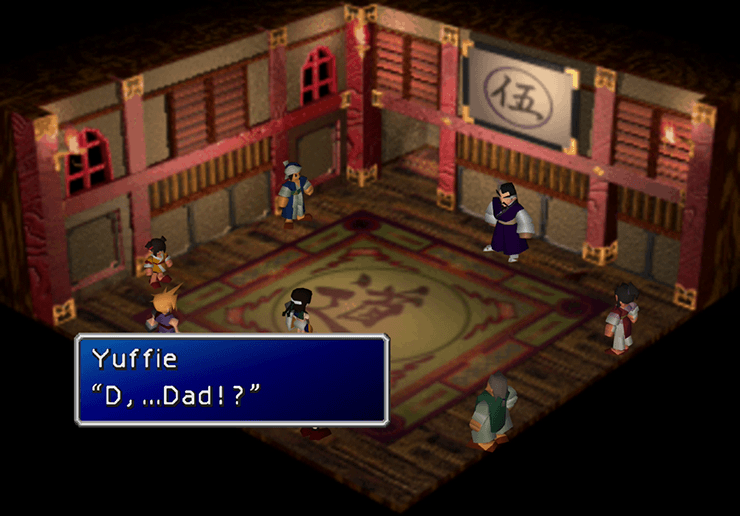 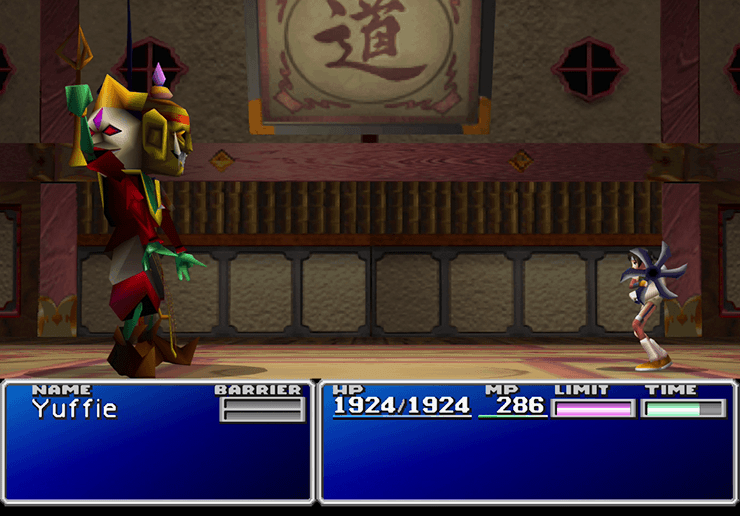 The Wutai Pagoda side quest is now complete. Your rewards are the 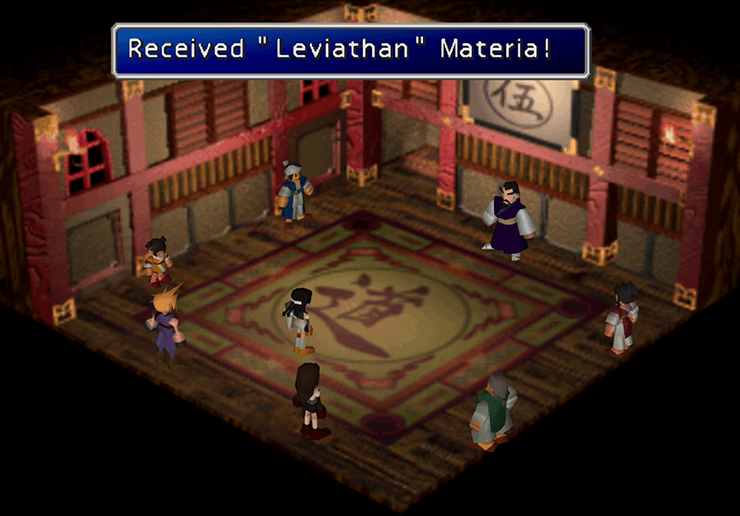 Leviathan Summon Materia as a reward. 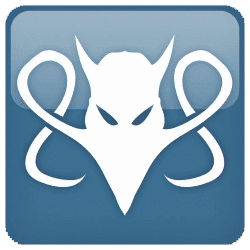 You will also receive the Meet Your Maker Trophy once you teach Yuffie her Level 4 Limit Break, All Creation, using the All Creation item that Godo drops at the end of the battle. 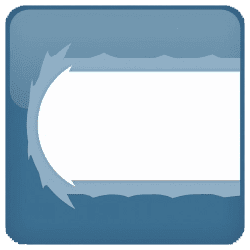 You can return to the side quests section or back to the walkthrough section by clicking on either of the links below: