Vincent is a secret character that you can obtain from a small side quest in the Shinra Mansion. The quest involves discovering the combination to the vault on the second floor and it can be done the first time you reach Nibelheim (but not during the flashback scene with Sephiroth that occurs in Kalm).

Combination to the Safe

As mentioned above, you don’t need to use the clues to find each of the number to the safe combination. These steps are provided just for informational purposes…

To the left of the entrance is a note that stands apart from the background. The note details research that was being performed on a scientifically altered subject. At the end of the letter is an option to continue reading the attached note which includes the following instructions:

Selecting each of the dials will provide a clue for each. They are:

- Dial (1): The lid of the box with the most oxygen.
- Dial (2): Behind the Ivory’s short of tea and ray.
- Dial (3): The creek in the floor near the chair on the second floor… then to the left five steps, up nine steps, left two steps and up six steps.

The fourth dial is hidden but still accessible from the menu: 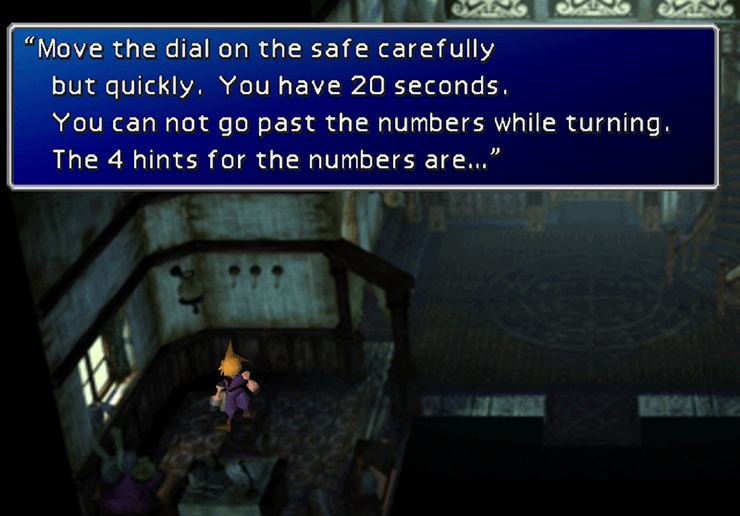 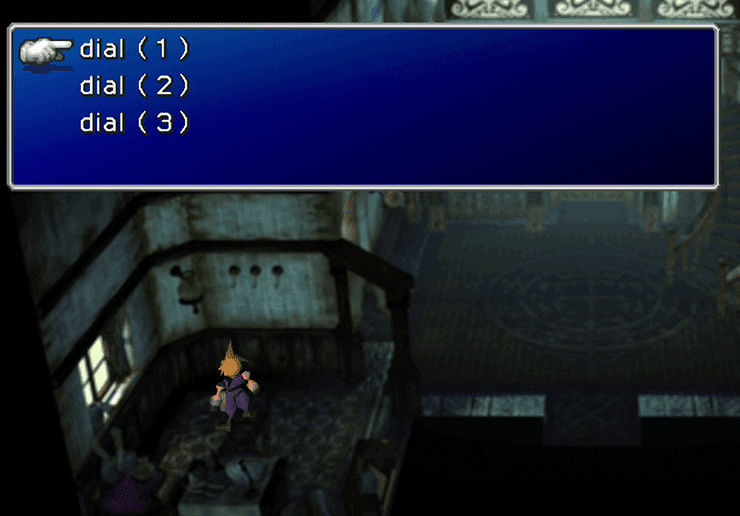 Now to find each of the individual clues:

The lid of the box with the most oxygen
This clue can be found by examining the empty treasure chest on the second floor that contained the Enemy Launcher weapon for Barret. 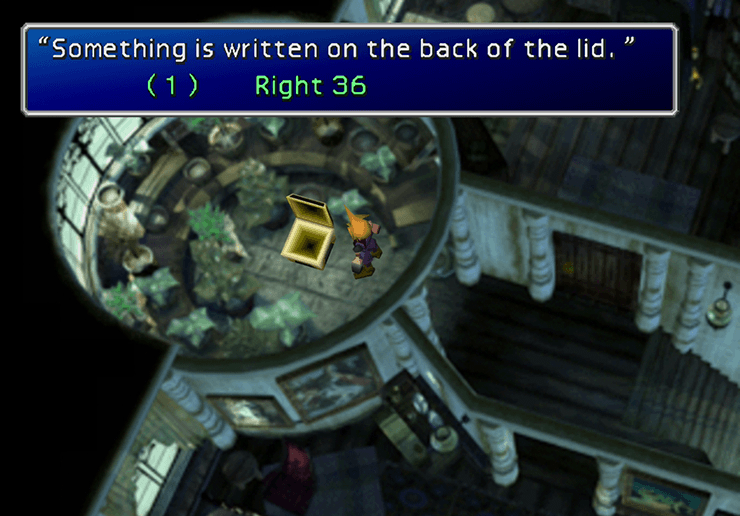 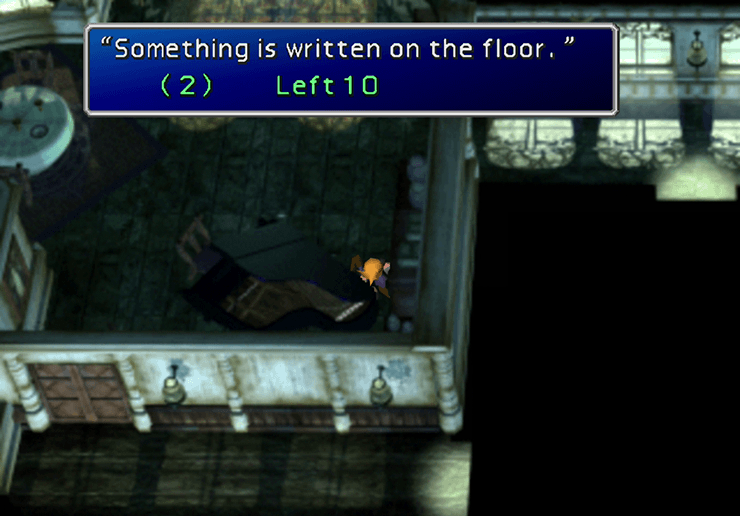 The creek in the floor near the chair…
This clue is located in the hallway of the second floor in the rooms to the right (use the screenshot to guide you). 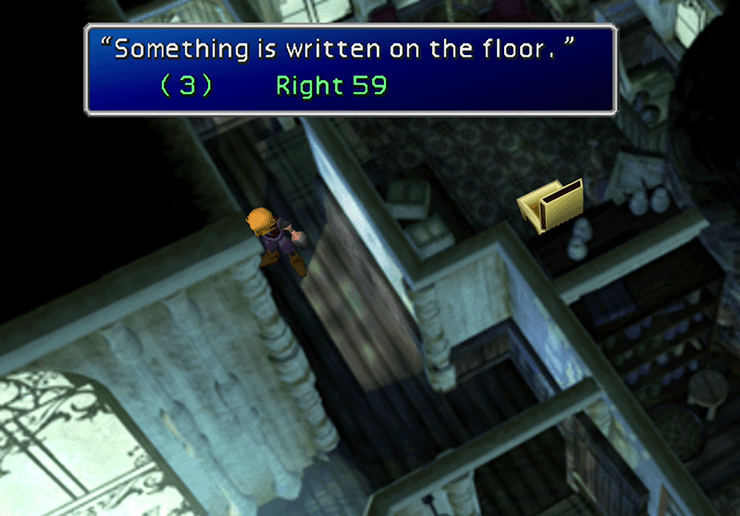 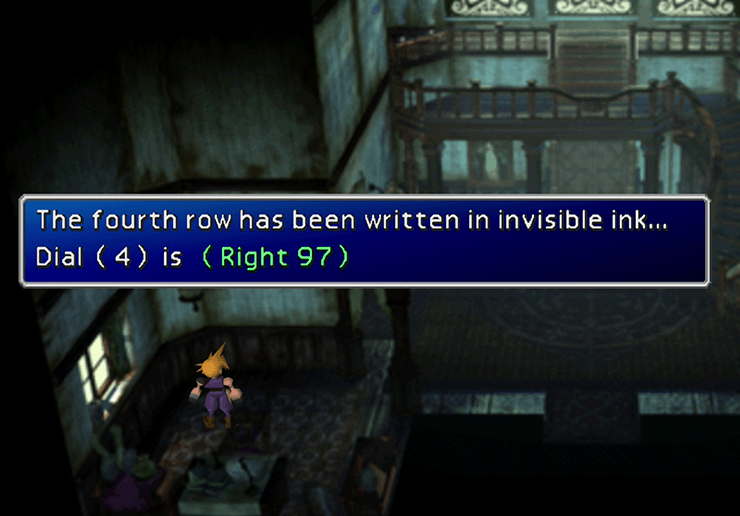 The Combination for the safe is:

You cannot go past the number listed while attempting to open the safe. For example, if you scroll right past 36 to number 37 on the safe you will have to attempt the combination again.

Make sure that you save your game before you attempt to open the safe if you are attempting this on your first pass through Nibelheim. You can come back to Nibelheim later on in the game which will make the boss fight much easier.

This boss fight will be one of the most difficult you have faced so far. It is also recommended that you build up your Limit Breaks prior to the fight. 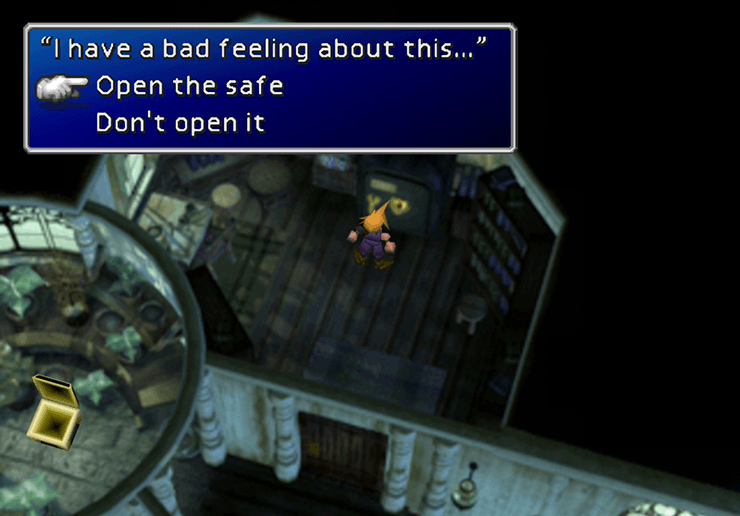 Lost Number starts the battle off in a split form - half of it is orange and half of it is purple. Once you reduce its HP below 50% it will transform fully into either the purple version or the orange version depending on what attack you used to take it below 50%. 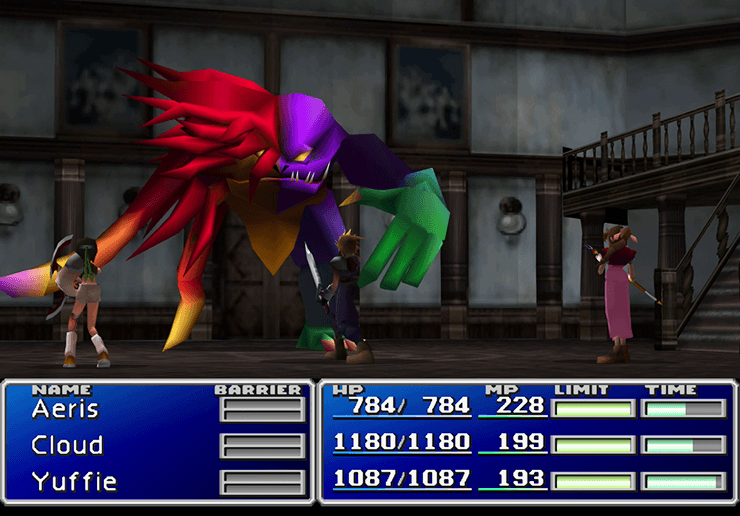 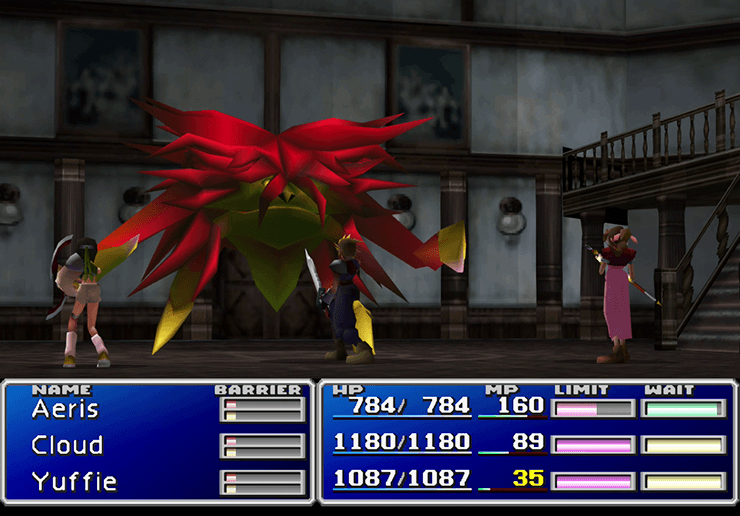 The purple physical form is much more difficult to deal with. In its purple form, Lost Number can use a move called “Lost Blow” which can deal upwards of 2500 damage to a single character.

For this reason it is highly recommended that you focus on magical attacks to transform Lost Number into its orange form which will only cast magic spells and will allow you to kill it using physical attacks.

Lost Number is susceptible to

Poison so cast Bio on it very early on in the fight. You should also make use of the Big Guard skill through your

Enemy Skill Materia. If you do not have the Big Guard enemy skill check out the Gongaga page in the walkthrough section for more information.

Cosmo Memory, which is Red XIII’s most powerful Limit Break (and cannot be learned until all other Limit Breaks have been learned) and

Odin Materia will pop out of the safe and land beside Cloud.

A Universe of Pain

You will receive the A Universe of Pain Trophy once you teach Red XIII his Level 4 Limit Break, Cosmo Memory, using the Cosmo Memory item that Lost Number drops at the end of the battle. 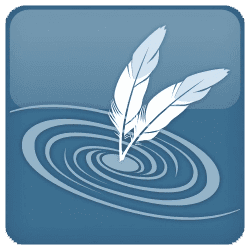 Pick up the “Key to the Basement” out of the safe and travel back down to the library where Cloud met up with Sephiroth. 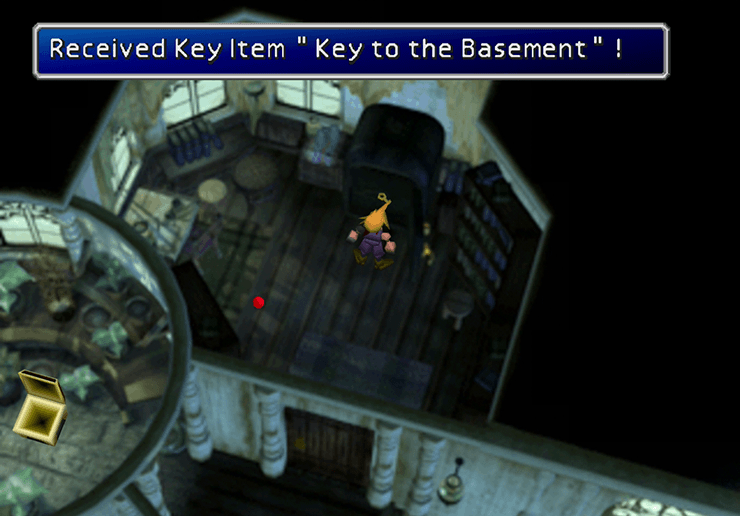 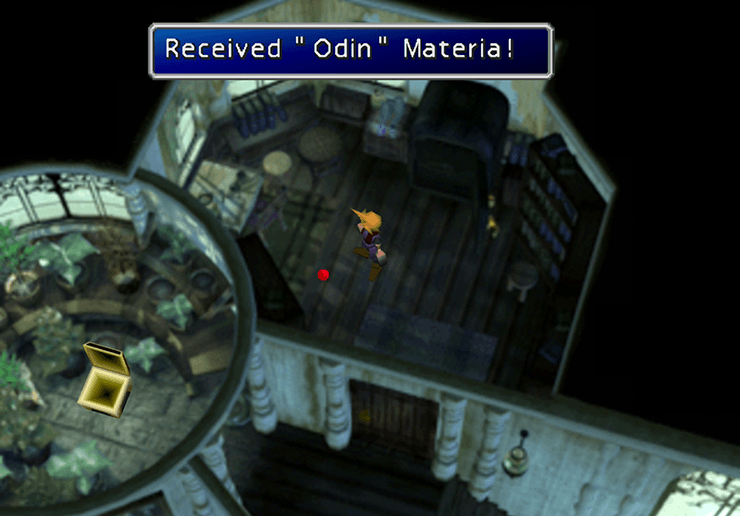 Part way along the pathway to the library is a wooden doorway at the top of the screen (shown in the screenshot below). Proceed through the doorway which is now automatically open and examine the coffin at the back of the room. 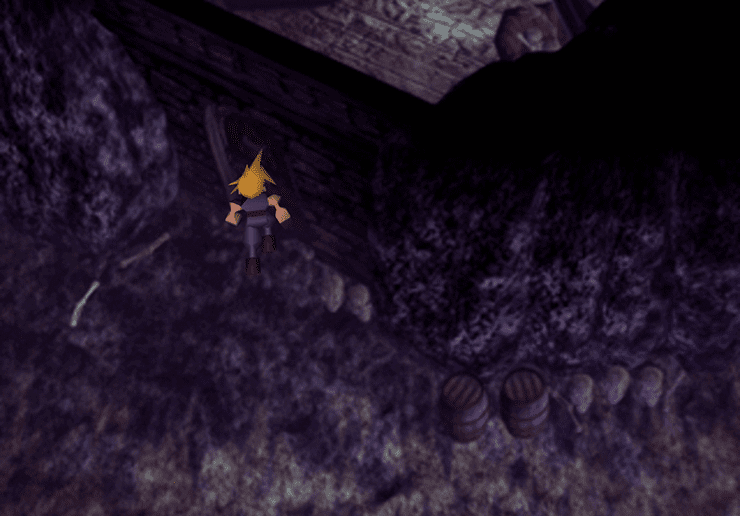 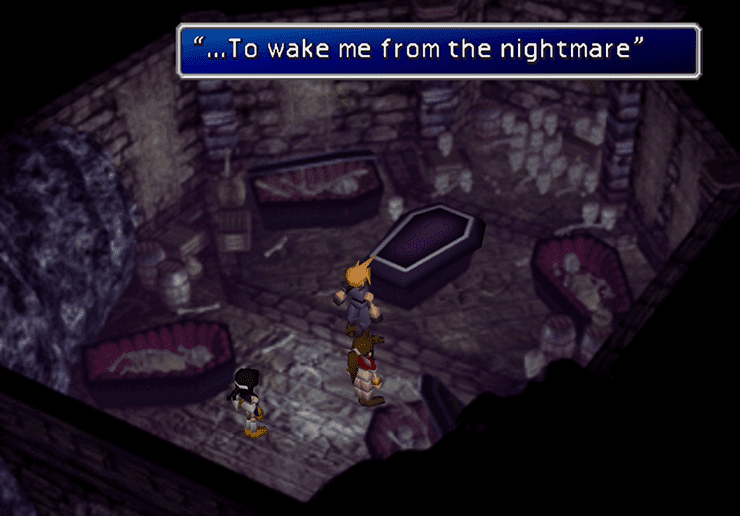 Choose to “talk about Sephiroth” when presented with the option. Open the coffin again after Vincent shuts it and choose “Who are you?” from the options presented and you will get to name Vincent. As you attempt to leave the area Vincent will offer to join your party. 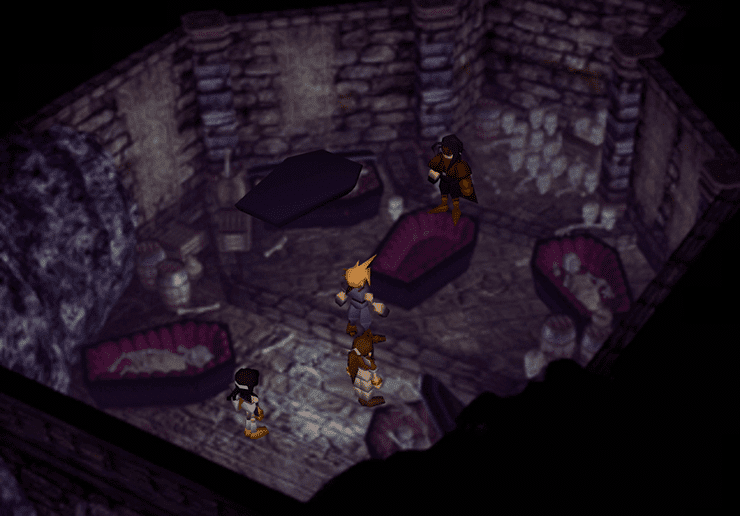 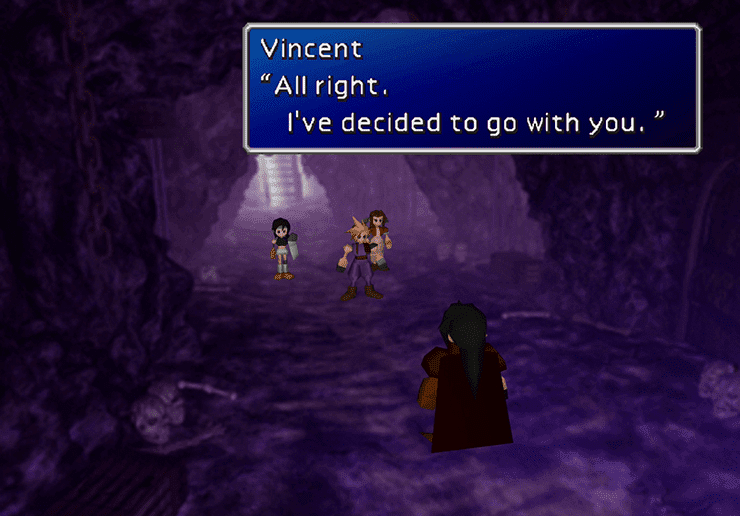 Won’t You be My Valentine?

You will obtain the Won’t You be My Valentine Trophy once Vincent joins your party at the end of the battle and the dialogue. 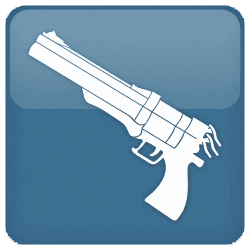 
Vincent is one of the strongest magic users in the game with very high Magic and MP stats. He is fairly average when it comes to most other stats though, including Strength, Vitality and Dexterity. Vincent’s biggest downfall however is his Limit Break abilities. 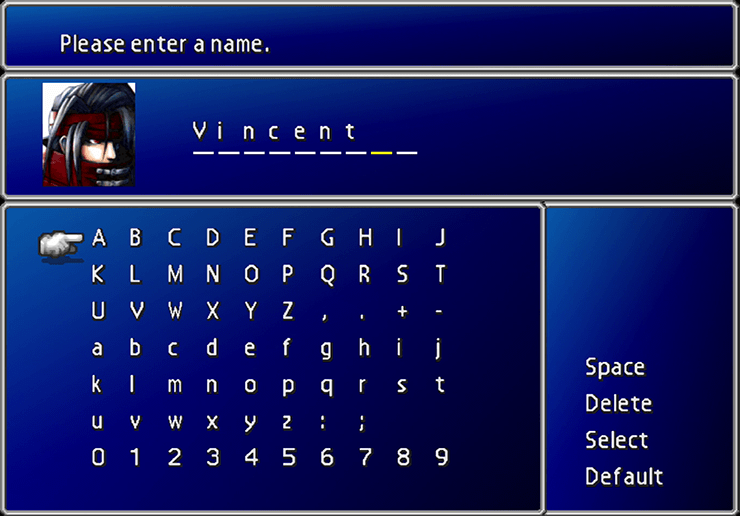 His Limit Breaks transform him into another character and, while that character is sometimes quite strong, you fully lose control of his actions in battle. He will continue to use the attacks in his arsenal until the battle is over. This can be problematic if:

Yuffie and Vincent are the only two secret optional characters available in the game.