The game returns to Steiner and Marcus who are still trapped in the suspended cage in Alexandria Castle. Follow the instructions when prompted and press left and right on the control pad to shift their center of gravity.

Continue holding down the directional pad in whichever direction the cage is moving to cause it to move faster until it finally breaks. Press the button every time Marcus yells to shift your weight. 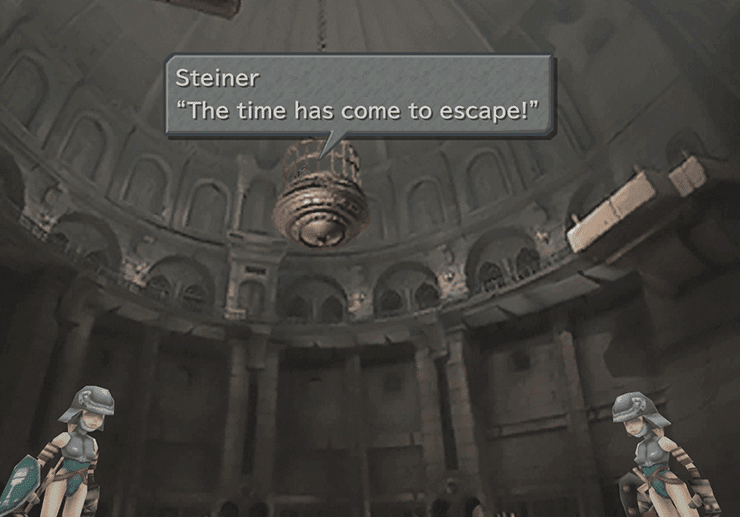 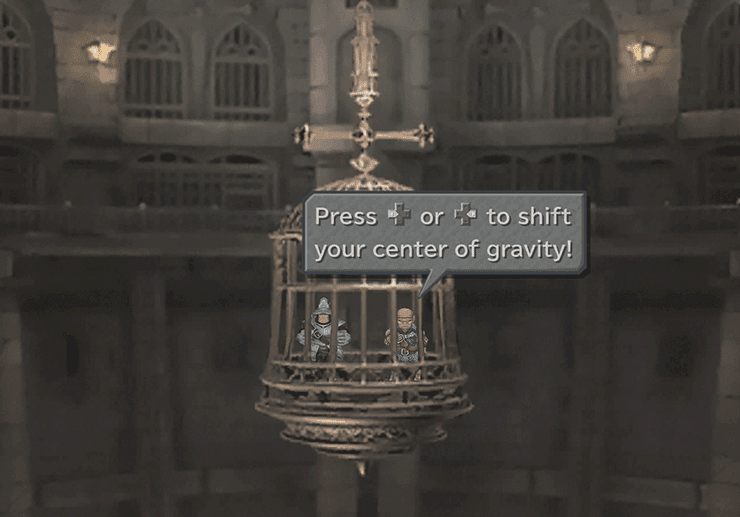 Start off by equipping Steiner with the best equipment that you have on hand and do the exact opposite for Marcus. Marcus will be leaving your party shortly. A

Iron Sword are your best choices.

Travel to the left side of the screen towards the ladder (not the one in the center of the screen but the one past it). You will have to deal with a couple of relatively easy battles against Alexandrian Soldiers.

Note that you can utilize a leveling trick at this point in the game to level Steiner all the way up to level 99, if you chose. Click on the link below for more information: 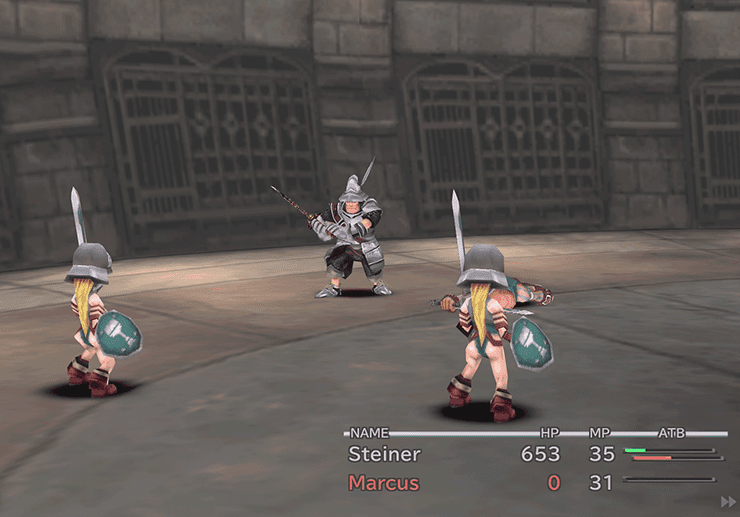 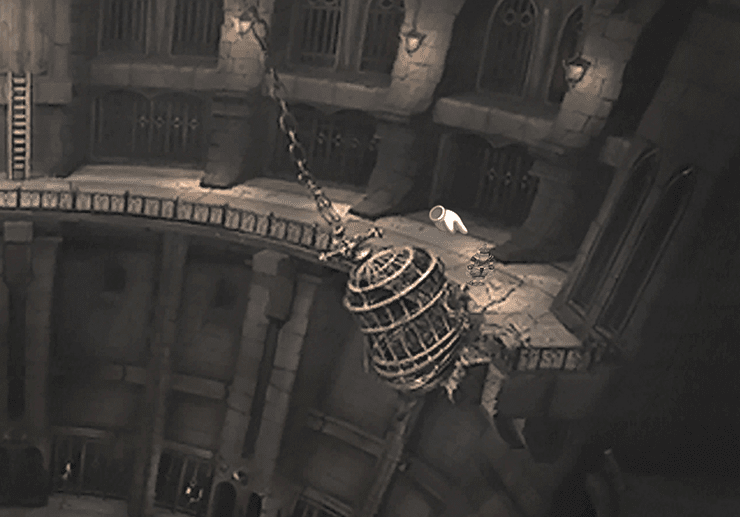 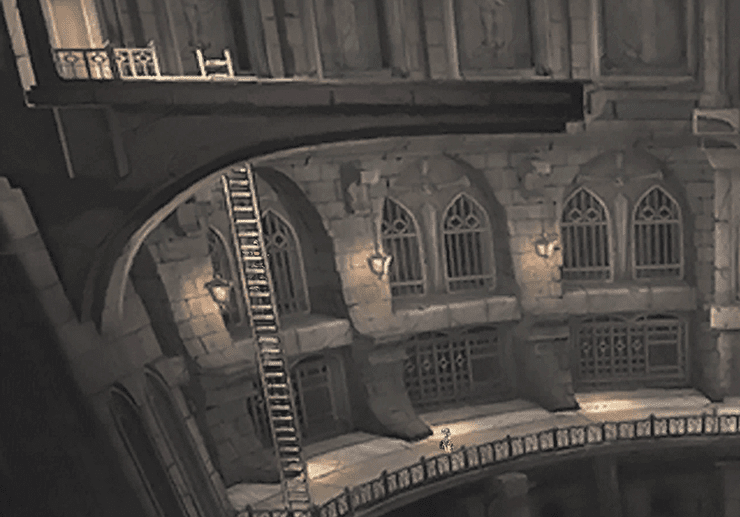 Climb the ladder and take the exit on the left side of the screen. Marcus will make a hasty exit leaving Steiner all by himself. Zidane, Vivi and Freya will land close by though leaving you with a full four party members. Make sure that they are all adequately equipped with weapons and armor. 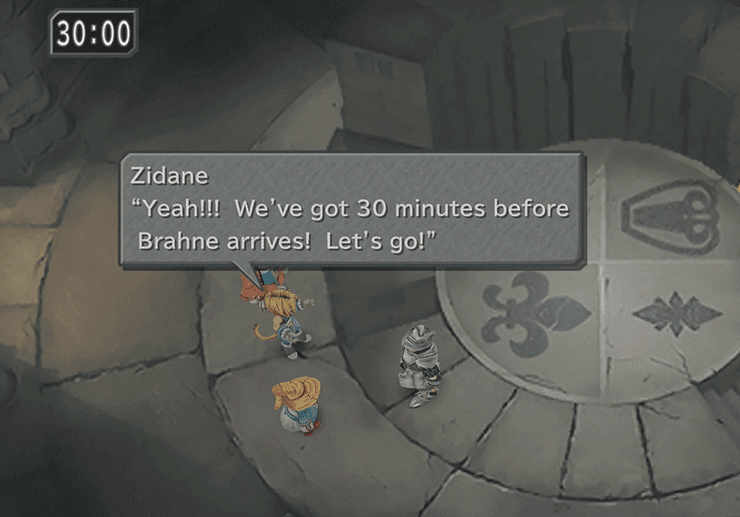 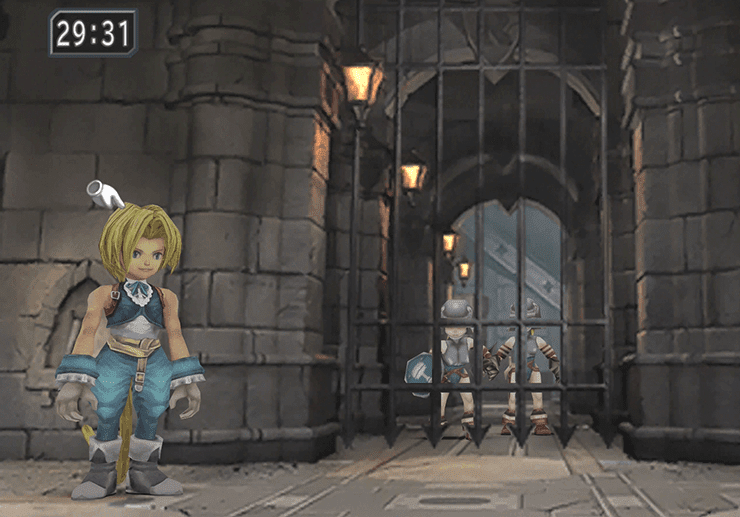 Travel away from the East Tower through the Courtyard. The Alexandrian Soldiers (the female ones) will chase you down as you run past them. You can avoid an extra fight as long as you do not let them make contact with you. Run north into the main castle ignoring the other guard house on the far left side. You will have to run past two more Alexandrian Soldiers. 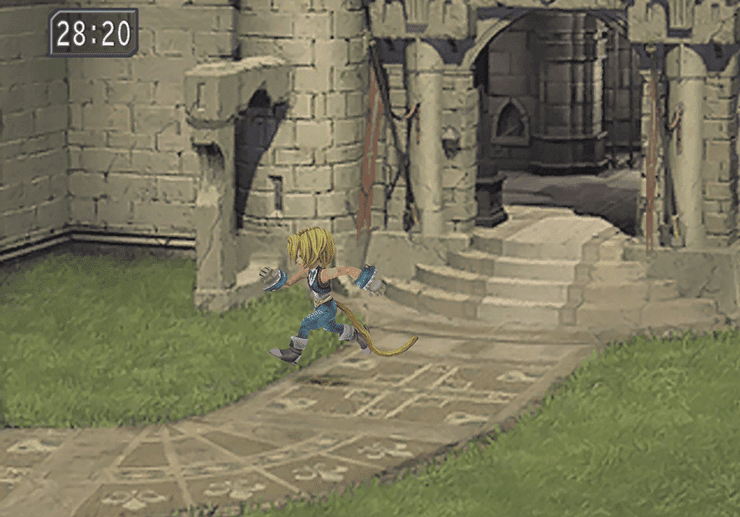 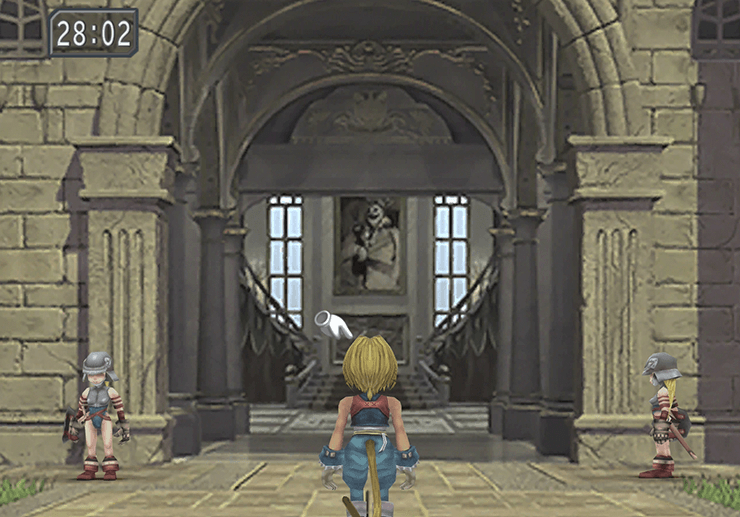 Run over to the far side of the main entrance and go up the balcony. Travel around the balcony and take the bottom-left exit on the opposite side from the staircase. Go up the circular staircase to the area where you first met Princess Garnet.

Go through the large double doors on the north side of the hallway that were previously locked. Travel all the way to the back of this room to reach the Queen’s Chambers. You need to find a secret passageway in order to proceed which can be accessed by inspecting the candles near the bed and opting to “Try and move it…”. Travel down the secret passage to continue. 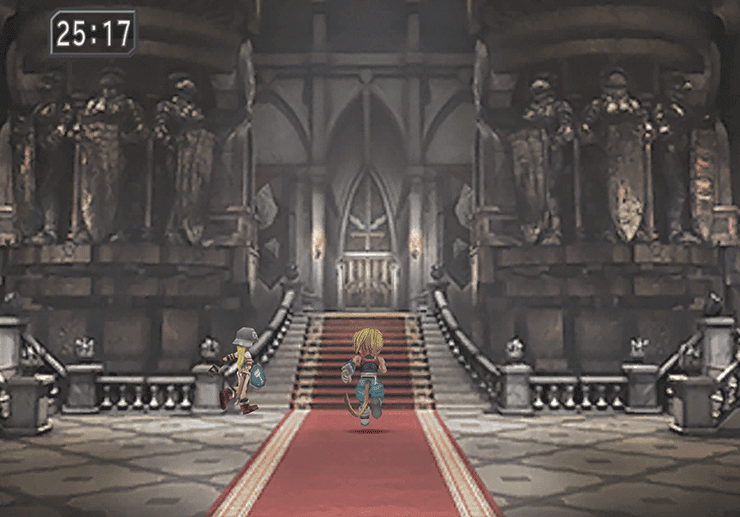 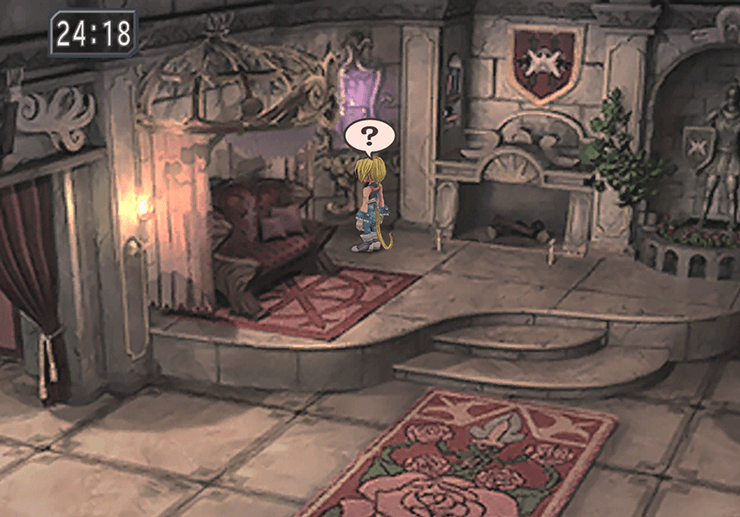 There are two fairly obvious treasure chests that you can see and both of them can be accessed by timing your movements properly on the swiveling platform. One chest contains a

Tent and the other contains an

Follow the staircase all the way down into the Underground and take the doorway you see on the north side of the room (shown in the screenshot below). You will be thrown into a boss battle against Zorn and Thorn. 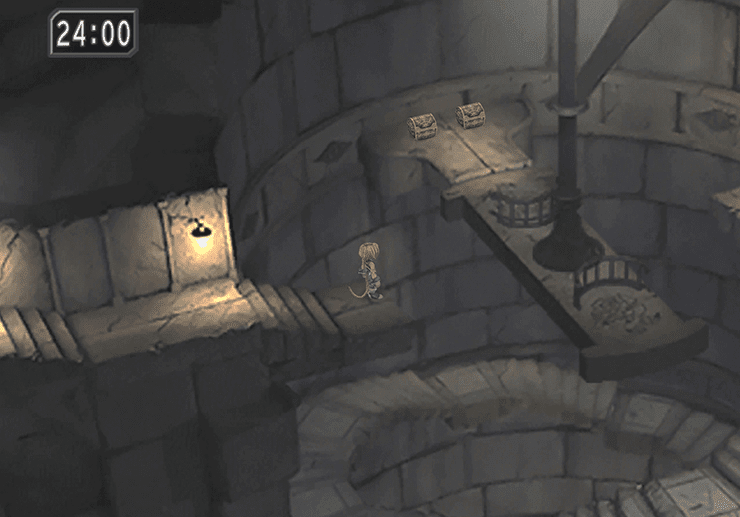 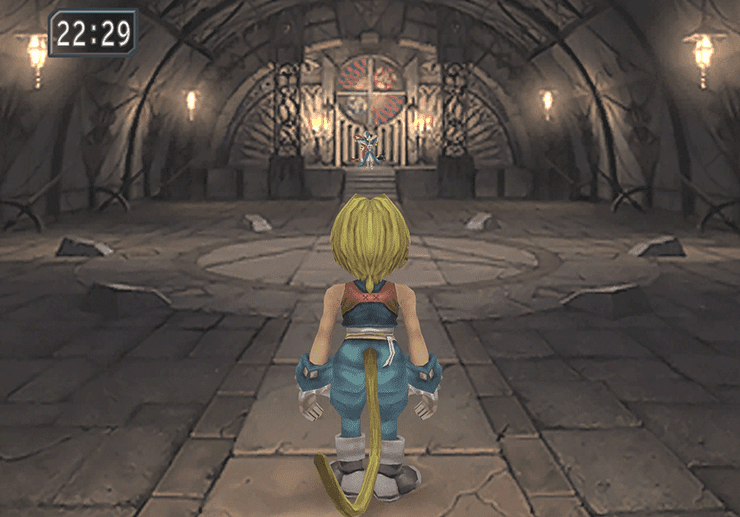 Zorn and Thorn can only attack after one of them “gives power” to the other. You can then attack whoever “received the power” to prevent them from attacking your party members. This can come in extremely handy as Zorn and Thorns attacks are relatively powerful and not having a healer makes recovery from their attacks all the more difficult. Zorn and Thorn are both susceptible to

Slow magic so cast it on both of them.

The battle will end as soon as you fully deplete the HP of either of the clowns. 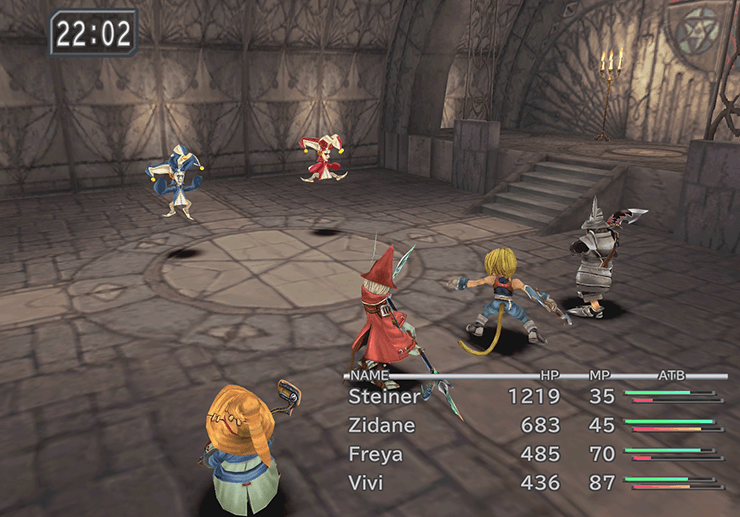 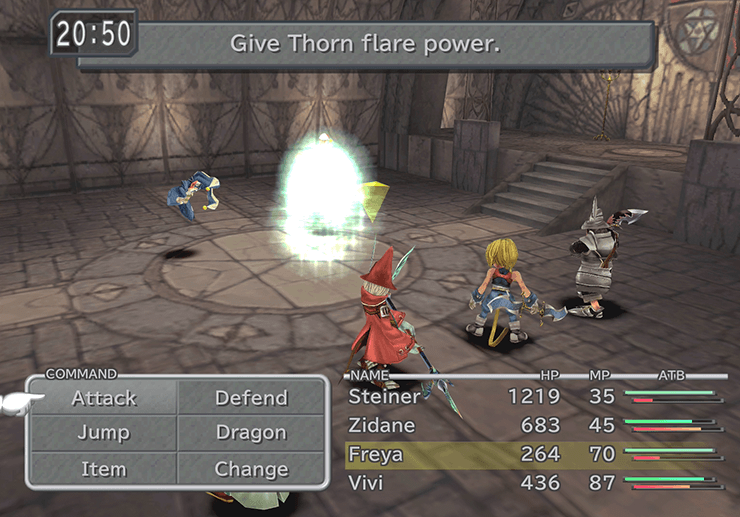 Zorn and Thorn will hastily exit the area at the end of the battle. Run up to the alter to save Dagger after the battle ends. There is an Active Time Event that triggers (and is mandatory) called “Friendship” which takes the story briefly back to Marcus in the Evil Forest.

Run back towards the entrance to the Chapel / Alter area and speak to Mosh the Moogle to save your game. Don’t forget to select the Mognet option to read some new letters including “Jump-rope Champion Appears!” and “Rumor About Princess Garnet”. 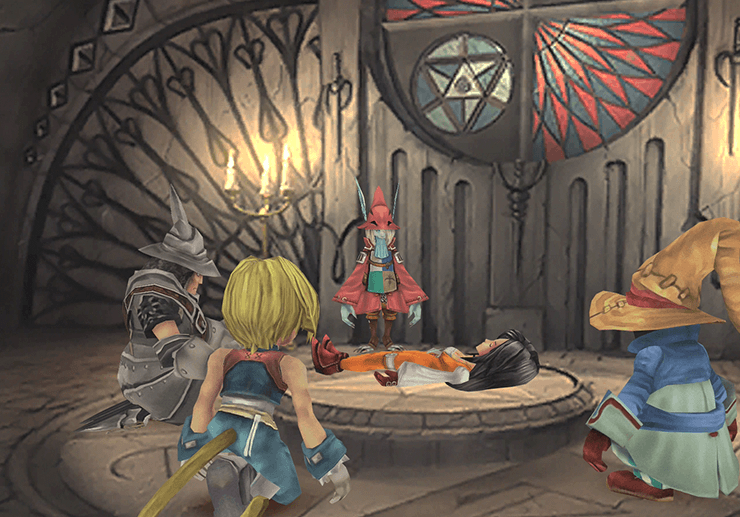 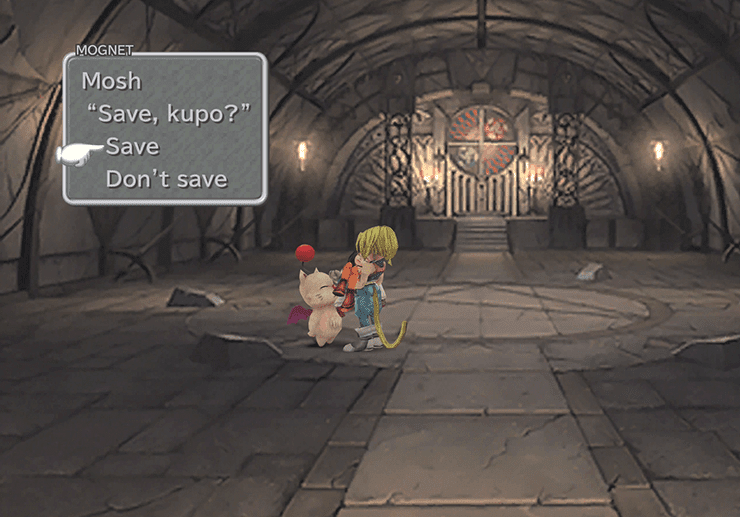 Carry Princess Garnet out of the the room and all the way back up to the Queen’s Room. A few more lines of dialogue before you move into the next boss battle - the third fight against Beatrix.

This battle operates just like the first and second battle against Beatrix. You cannot actually defeat her and the battle will automatically end after a set number of turns. It can be difficult to effectively steal all three items from Beatrix before the battle ends but that should be your primary goal.

Slow magic on Beatrix as early as possible in the fight to prologue the battle and improve your chances of successfully stealing. Then just focus on keeping your party members alive through Beatrix’s bombardment of attacks. 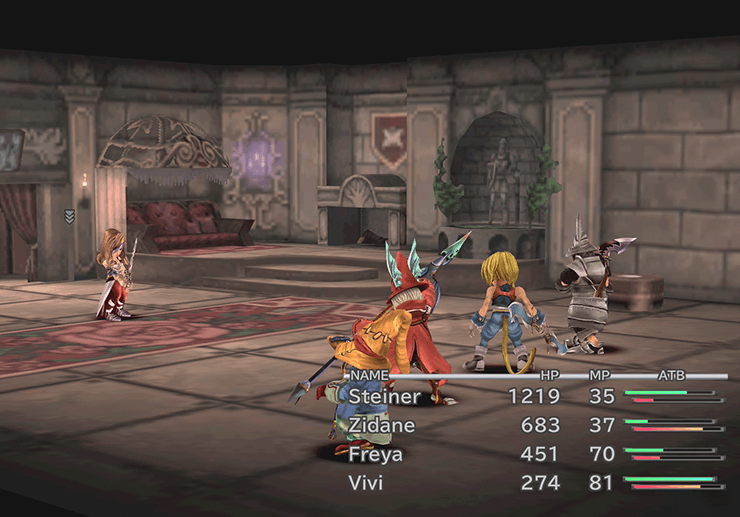 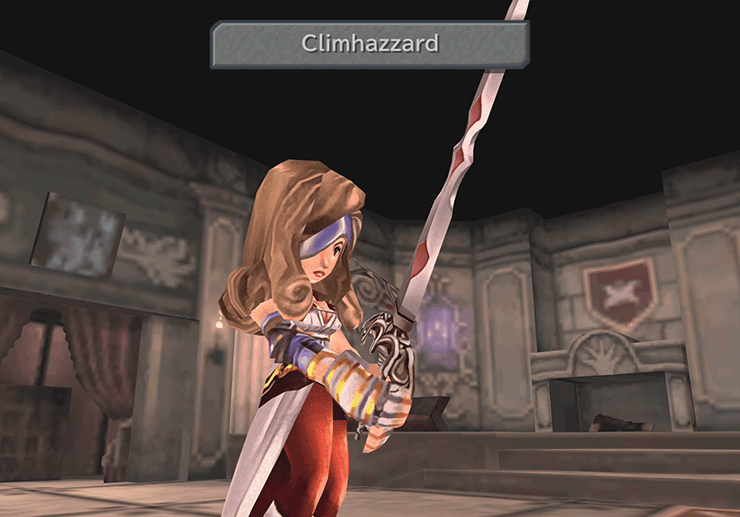 Beatrix will realize her mistakes at the end of the battle and cast a counteractive spell to help Princess Garnet. After reviving her, the team (excluding Freya) will leave through the trap door. You will have to complete the battle involving Freya and Beatrix against the Bandersnatch.

Defeating the Bandersnatch is relatively easy with Beatrix in your party. One attack from each of Freya and Beatrix should defeat it and you’ll be back in control of Zidane and his party.

Equip Dagger with items if needed as you have not fought with her for quite a while. A Bandersnatch will appear behind you after you jump on the moving platform. You have the option of fighting it if you would like to but there is no reason to waste your time. 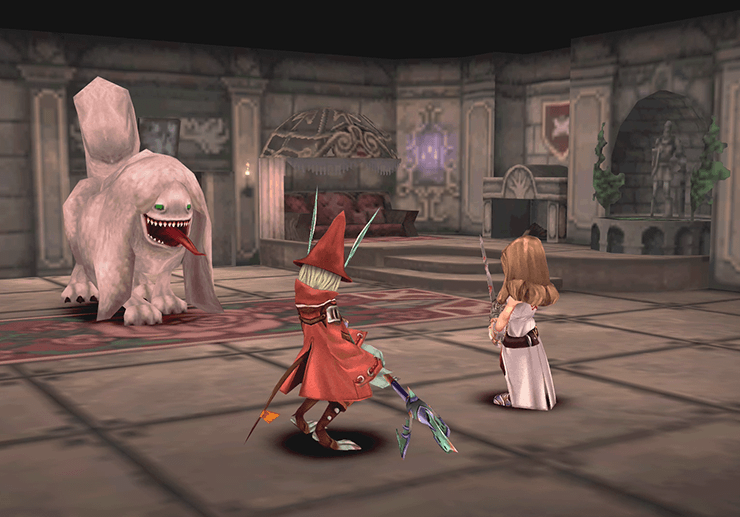 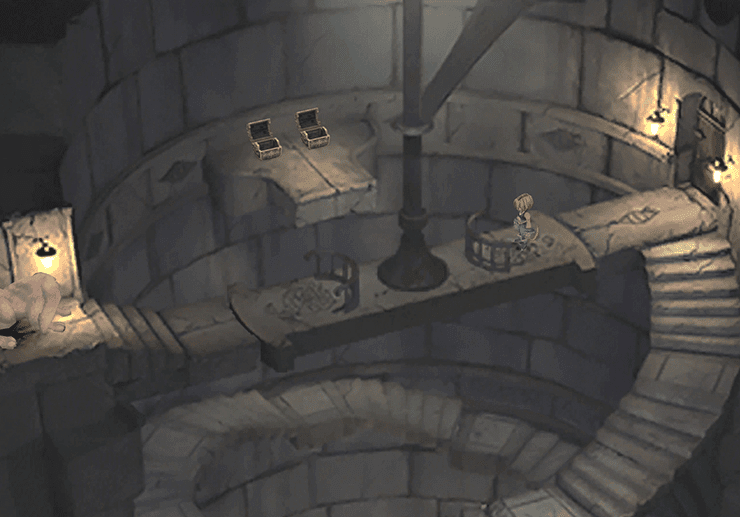 Continue down the pathway and you will be ambushed by three Black Mages in the next screen. The Black Mages (Type C) are also quite easy to defeat. Use Dagger’s healing spells if you need to.

One more battle against two Bandersnatches once you get past the mages. Steiner will leave the party in the next screen and then you will be thrown into battle against another Bandersnatch. The game then jumps back to Beatrix and Freya at the top of the pathway. 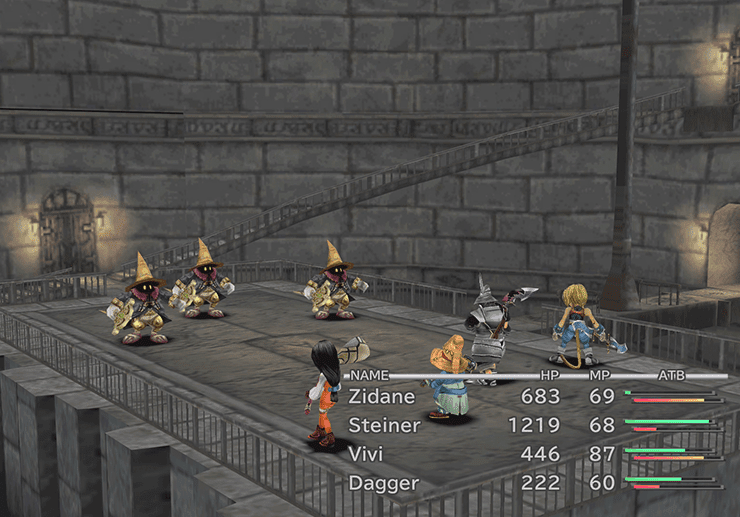 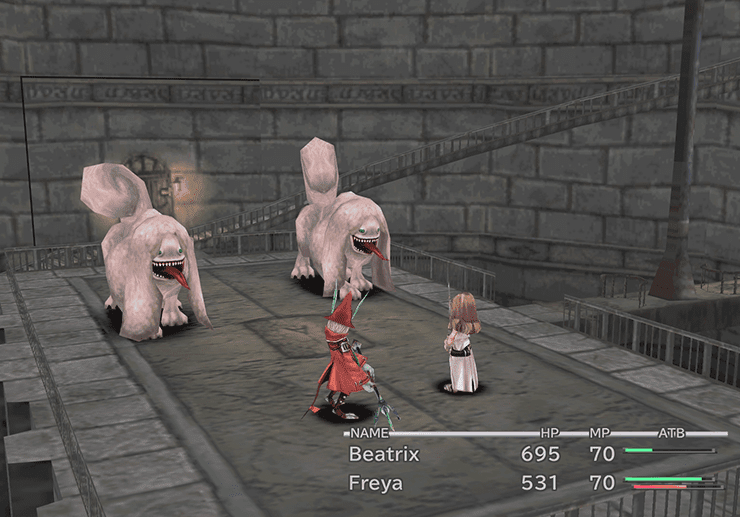 Battles against Bandersnatches are much easier with Beatrix in the party. Just have her hammer away at them with regular attacks and use

Cura to keep both hers and Freya’s HP up.

Warning: Before you continue downwards as Zidane again, go back into the alter room and speak to Mosh one more time to pick up another letter for Monty and take the opportunity to save your game.

Continue downward and another trap will spring once you reach the end of the secret pathway and Zorn and Thorn will jump out. This time Marcus and Blank will rush out to save the day. The whole party will jump onto another Gargant and will be thrown into the next boss battle as they travel back to Treno. 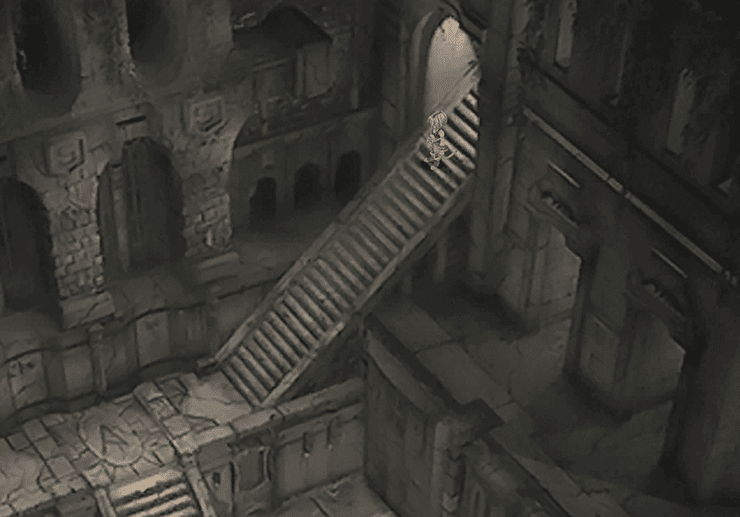 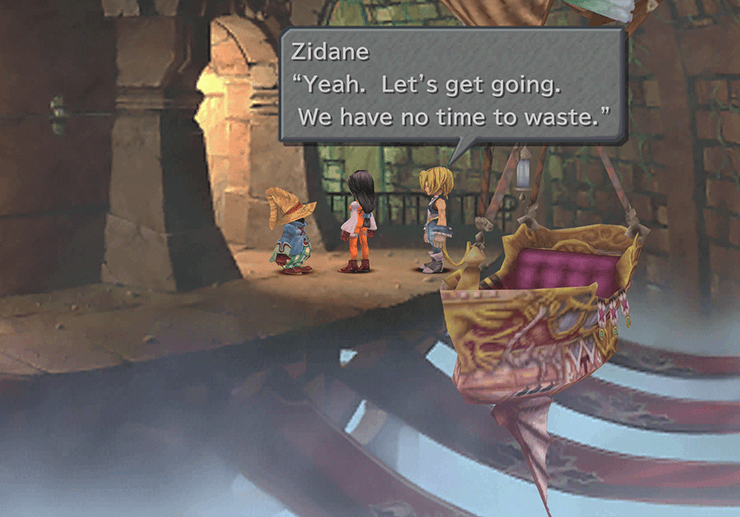 Oak Staff as this can be used to teach Vivi the

Bio spell which is incredibly important later on in the game. You can make this easier by having Vivi cast

Slow until it sticks.

Ralvuimago can cast a move called Ultra Sound Wave that can inflict the Mini status effect which reduces a character’s physical attack power. The only way to remove Mini at this point in the game is to use a

Remedy on the afflicted character.

When Ralvuimago becomes more compact it will stop attacking and only counterattack after you hit it. It will only counter physical attacks which means that you can still hit it with spells (from Vivi) when it is counterattacking. Use Vivi’s

You can essentially just switch between a regular attack and a spell to keep the boss going from compact to non-compact and never actually attacking. 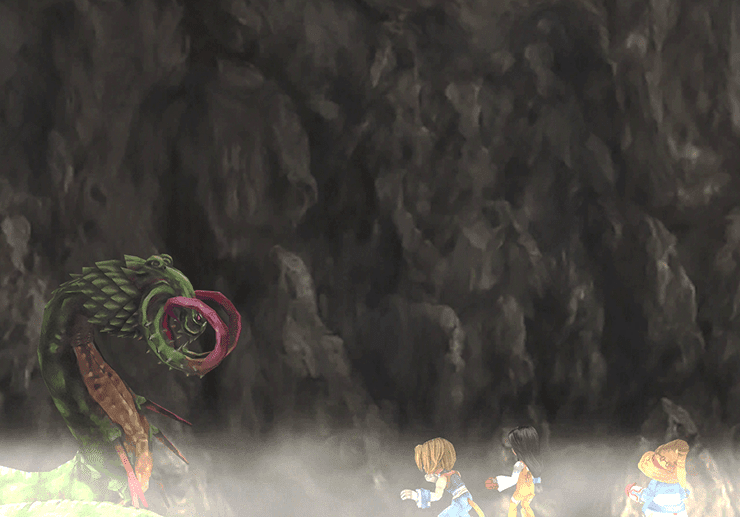 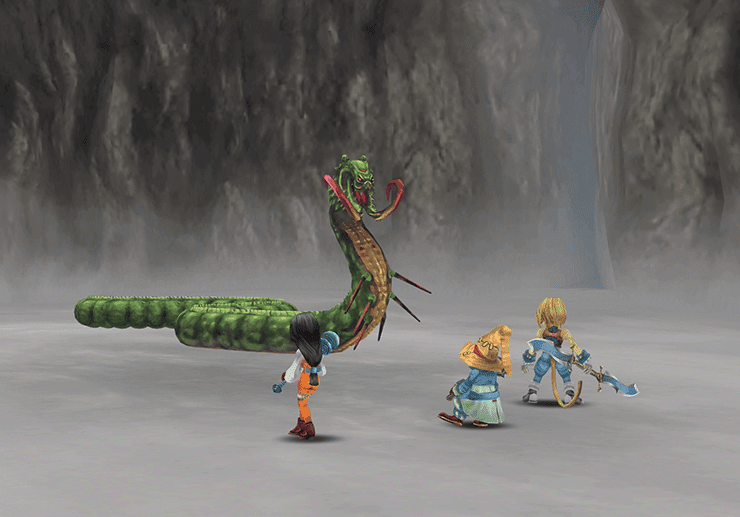 There are a few more cutscenes involving Zidane, Dagger and Vivi in the Gargant and then back at the castle involving Queen Brahne and two assassins before the story moves on to the next area.