The Great Fairy’s Fountains are located across Hyrule. Link can learn new skills and abilities by finding each of them.

This Great Fairy’s Fountain becomes available immediately after you have completed the Dodongo’s Cavern dungeon. Darunia even suggests that you head to see the Great Fairy and gives you a clue as to where to find her. 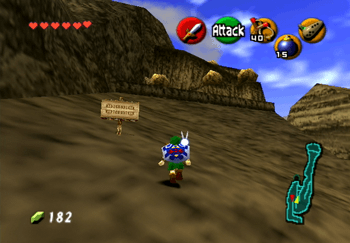 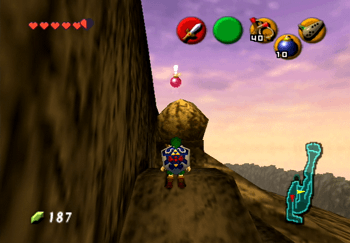 Head towards Goron City but take a detour to the left when you reach the large flag in the road and head towards the area shown in the screenshot below. Use your Bombs to remove each of the boulders along the pathway. There is one last boulder at the top of the cliff that, when blown up, reveals a hole in the ground. Drop into it to find a Lon Lon Cow (you can fill up your Bottles with Lon Lon Milk using Epona’s Song if you would like to) and exit after you have picked up all of the items. 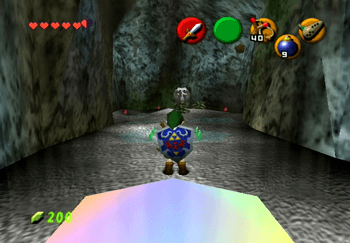 Continue down the pathway but beware of falling rocks in the next area. The screen will light up red when rocks are about to fall. Just use the R button to have Link hide under his

Hylian Shield and protect himself. There is a climbable wall at the end of the path that has a number of Skulltulas on it. Use your

Fairy Slingshot to clear as many of them off the wall as you can and then climb up. 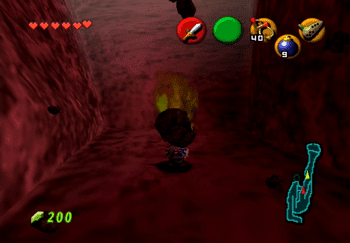 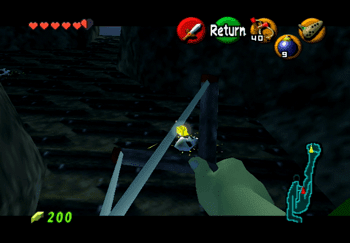 The owl is perched on the sign at the top of Death Mountain when you reach it. Thankfully talking to him is optional for this go around. Use your Bombs on the wall to the left of the Owl and then enter the first Great Fairy’s Fountain. Stand on the Triforce near the fountain and play Zelda’s Lullaby to make the Great Fairy appear. 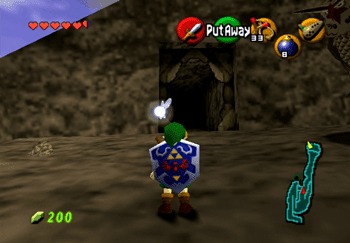 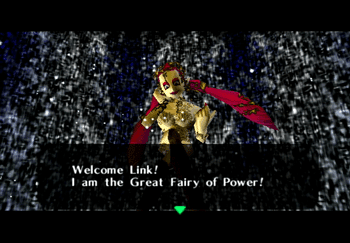 Effect: You can now initiate a Spin Attack. A Spin Attack will slowly deplete your Magic Meter though so you will now have to keep an eye on that as well. Speak to the owl outside of the Great Fairy’s Fountain for a free ride down Death Mountain.

You can open up and enter this Great Fairy’s Fountain as soon as you have completed the Dodongo’s Cavern and have access to Bombs in your inventory. Travel back to Hyrule Castle, climb the vines and get past the gate onto the trail. There is a pathway on the easternmost side of the map with a boulder blocking the way. Use a Bomb to destroy the boulder and then enter the small hole that appears. 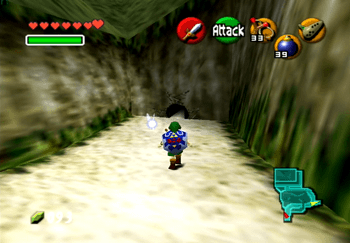 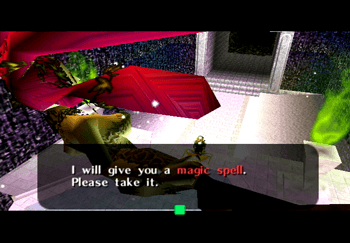 Enter the Great Fairy’s Fountain and pull out your Fairy Ocarina while standing on the Triforce. Play Zelda’s Lullaby to make the Great Fairy appear. This Great Fairy will teach you how to use the magic spell, 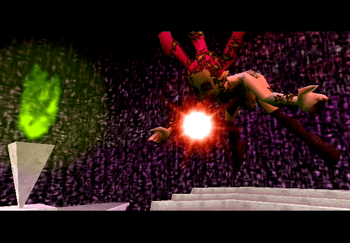 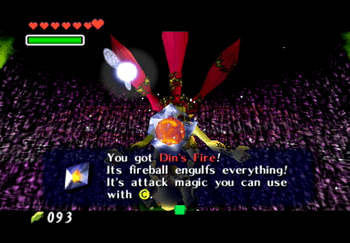 Effect: Din’s Fire can be used to unleash a wave of fire surrounding Link whenever he uses it. It takes a fair amount of Magic Power to use, but it can be extremely helpful against groups of enemies and for lighting groups of torches later on in the game.

There is a small peninsula/island in the southeast corner of Zora’s Fountain. Use a bomb near the light-colored boulder to reveal a huge cave that leads to this Great Fairy’s Fountain. Play Zelda’s Lullaby on the Triforce to make the Great Fairy appear. 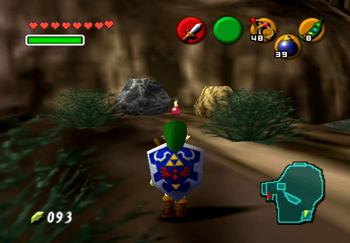 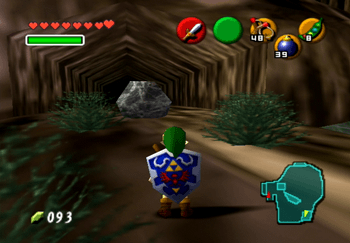 Farore’s Wind can be used in a dungeon and then used again to return to the entrance to that dungeon. It has very limited applications throughout a regular playthrough and is completely unnecessary. 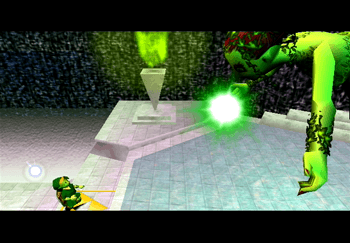 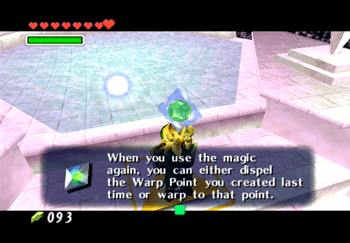 You can reach this Great Fairy Fountain after you have completed the Fire Temple or, more specifically, after you have obtained the Megaton Hammer. From the Death Mountain Crater warp point (the place you land after playing the Bolero of Fire),

Hookshot back across the broken bridge and find a cave in the wall with two boulders blocking the way. These boulders are immune to Bombs but they will break apart if you hit them with the 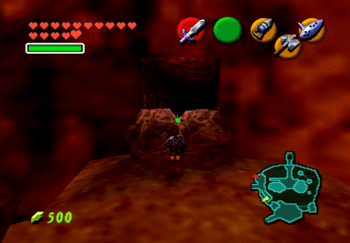 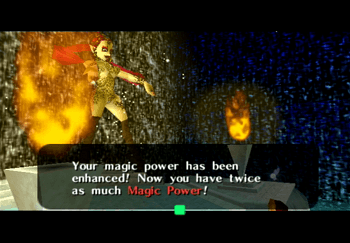 Effect: The effect here is fairly straightforward – Link will now have double the Magic Power (twice the bar size) that he previously had. 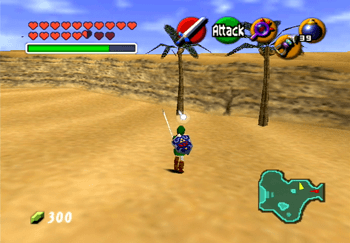 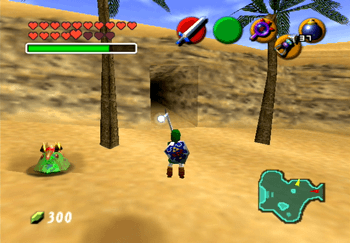 Nayru’s Love can create a temporarily shielded area that Link can stand in where he will not take any damage. This has limited application in the game (and is typically very rarely used). It cannot be used to prevent damage inflicted by Ganon. 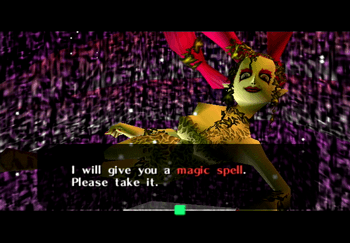 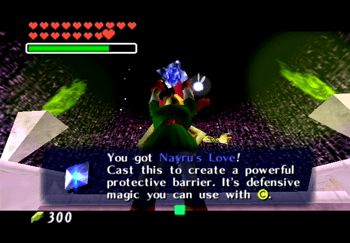 The last Great Fairy can only be reached after you have completed the Shadow Room inside Ganon’s Castle and have obtained the Golden Gauntlets. Check out the Ganon’s Castle walkthrough page for more information. 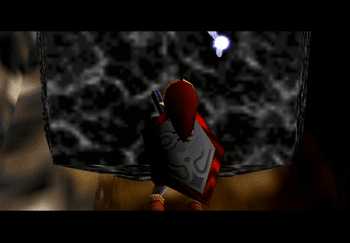 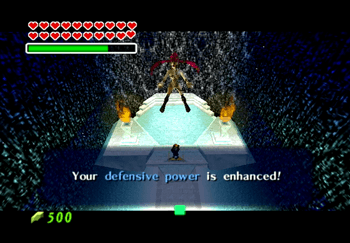 Defensive Power will place white circles around each of the Heart Containers in the top left side of the screen. Link will now take much less damage than he previously did (reduced by half). This can be extremely helpful for the upcoming fights against Ganondorf.