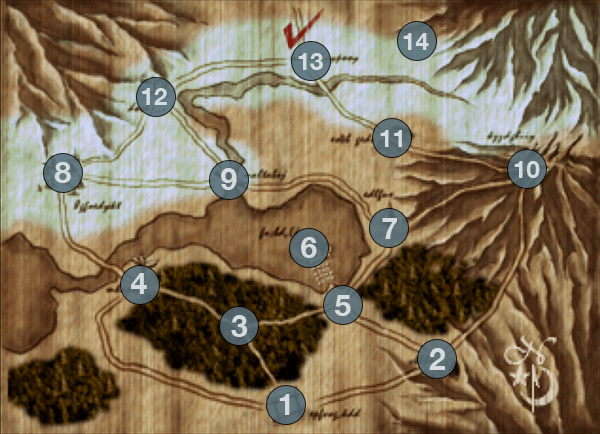 After a certain amount of steps (544 steps which is equal to approximately 145 seconds of movement) you will pass out and regain consciousness in Mr. Holzoff’s cabin in an area north of Area (13).

You can return to the Great Glacier after having passed out. Just proceed south away from Mr. Holzoff’s cabin and you will return to Area (13) which is a snowy area that looks like the World Map. You can travel west into Area (12), south into Area (11) or east into Area (14).

Depending on the routes you took when the paths split during the snowboarding mini-game you may have landed in any one of the four following areas:

Use the maps included below to help you discern where you landed.

Do not get mixed up when traveling from one Area to another. North/West/South/East will only apply when you reach a landmark but not when you travel between two landmarks. 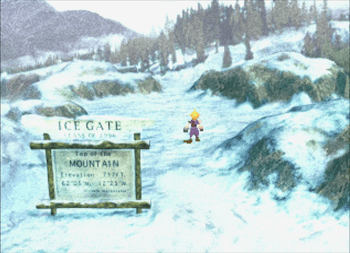 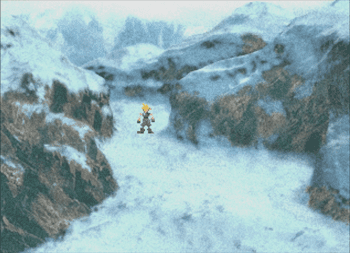 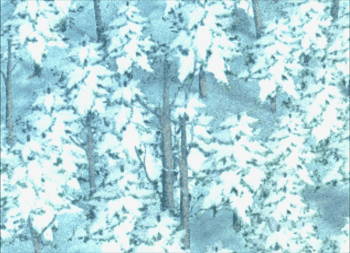 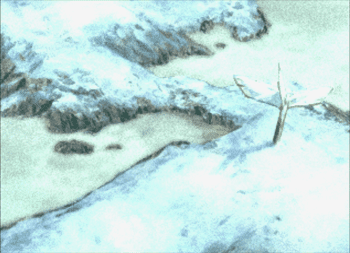 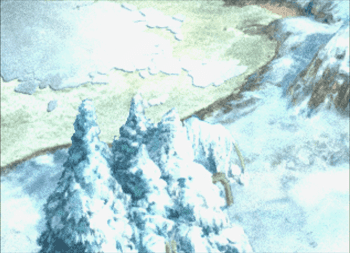 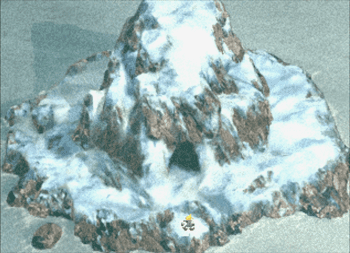 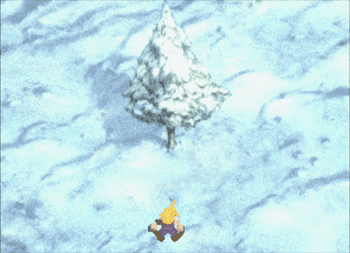 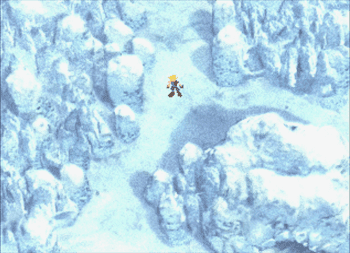 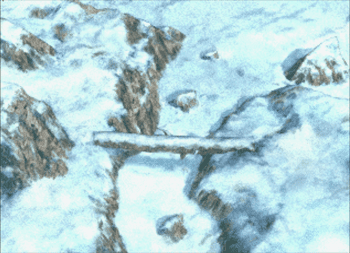 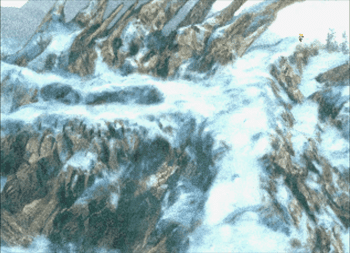 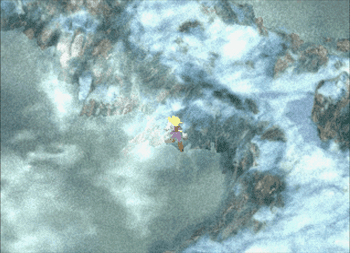 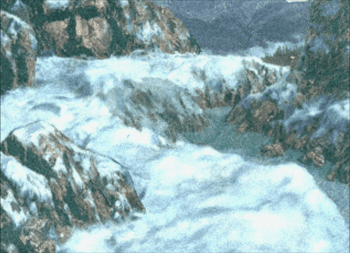 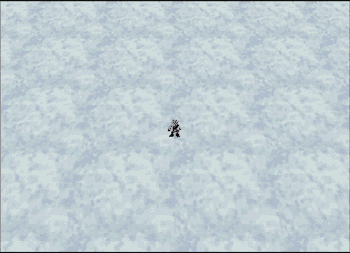 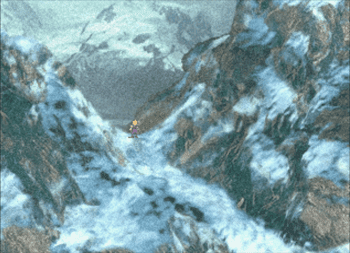 You may encounter an enemy in this area called a “Snow” which looks like a female human pictured in the screenshot below. You can steal an accessory called a

Circlet from them which increases the users Magic and Spirit stats by 30 each. This is a very strong accessory for Magic users. 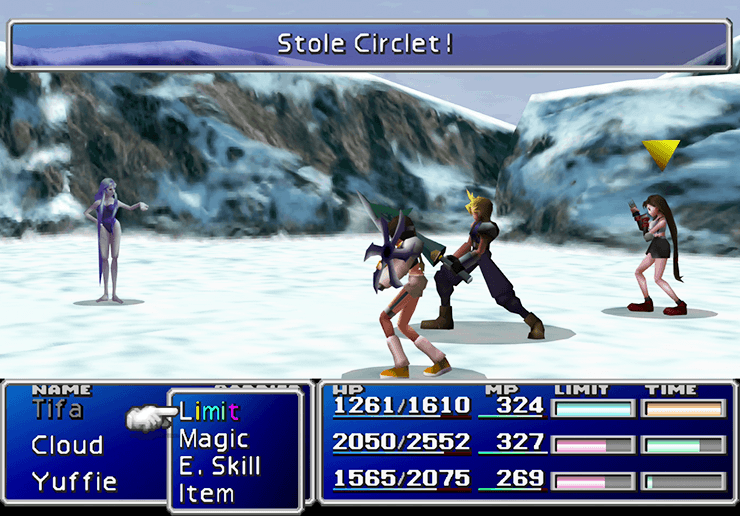 Start off by traveling from where ever you landed to Area (3) or if you were lucky you may have already landed in this area.

Mind Source. Travel to the east from where you found the Mind Source over to Area (5) as indicated on the map. It can be a little bit difficult to find your way through the forested area but just make sure you exit out of the right side of the screen. 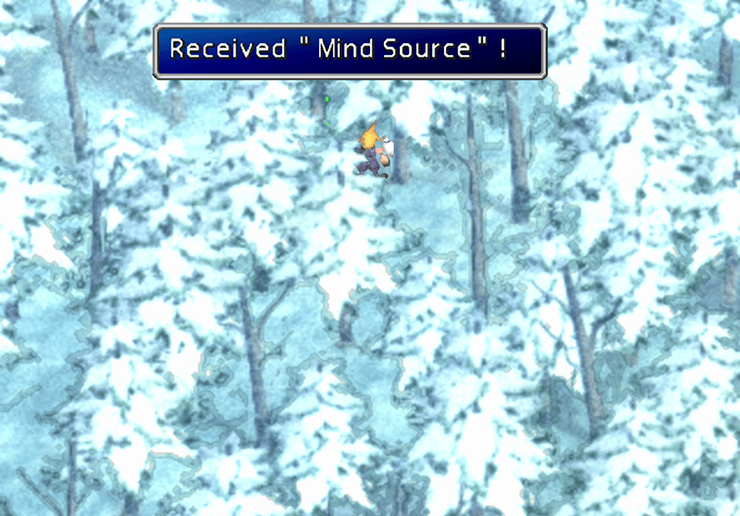 You can find all of these items below in the order listed. If you pass out you will find yourself at the Base of Gaea’s Cliff which is located just north of Area (13) on the map. Travel back south into Area (13) which looks like a snow field and use the trail markers to exit either west, south or east.

In Area (5) you will find a lake with a sheet of ice in the middle. Walk straight over to the ice platforms - pick up the

Potion lying on the ice and continue northwest towards Area (6) which is shown in the screenshot below.

Jump onto the first iceberg and then go: 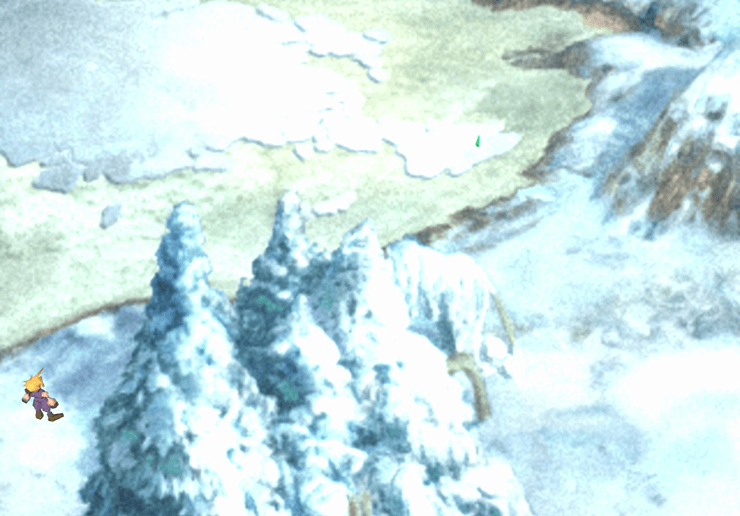 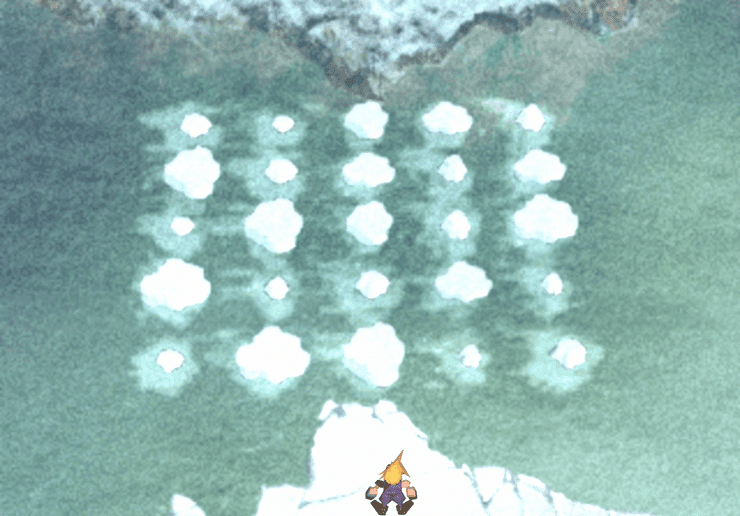 Safety Bit. To get back across the iceberg maze use the following path: 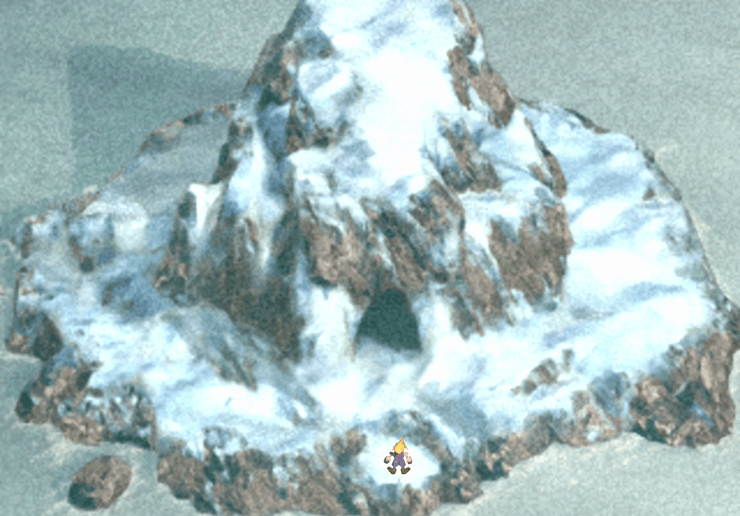 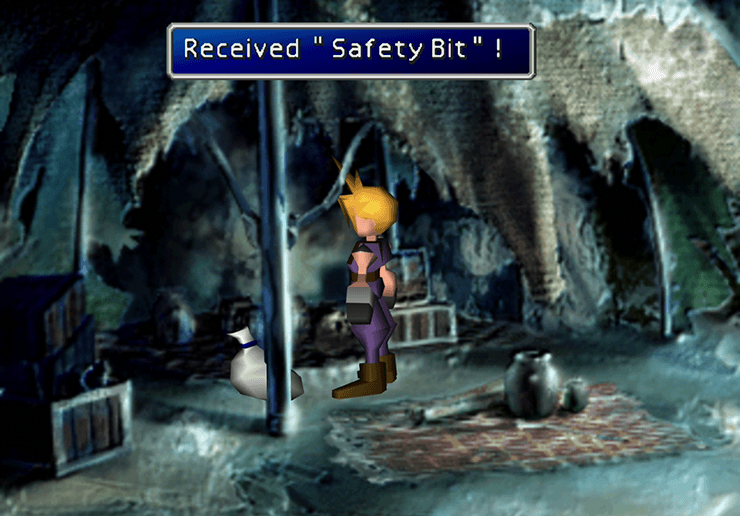 Travel from Area (5) northeast and along the pathway until you reach Area (7) with the lone pine tree. Head east (to the right) away from the pine tree towards Area (10). 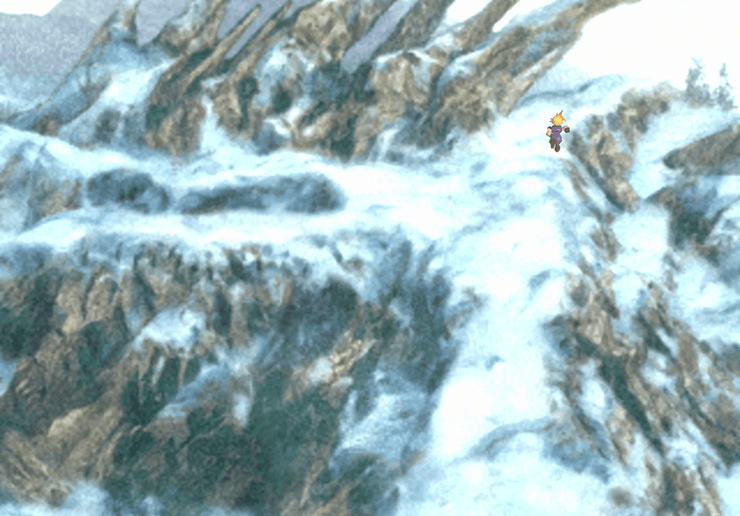 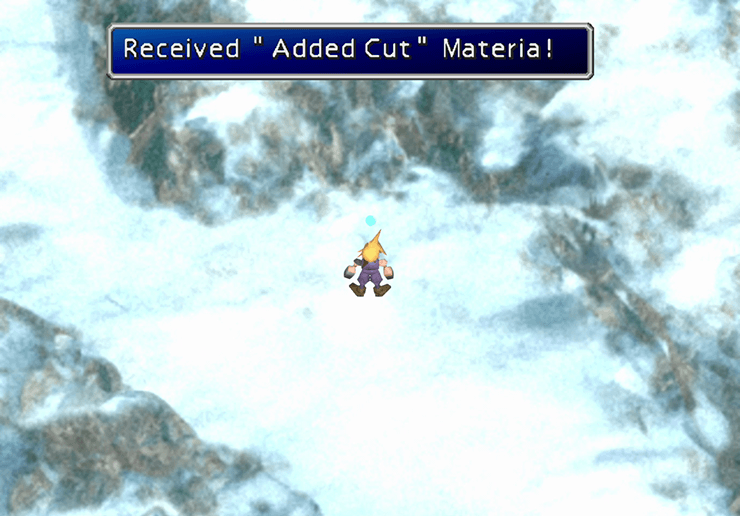 The first step to obtaining the Alexander Summon Materia is to travel towards Area (11). You can either return to Area (10) and head northwest or, if you passed out and were returned to Area (13), head southeast.

Reach down and touch the hot spring in this area. This step is required before you can move on to obtaining the Materia. 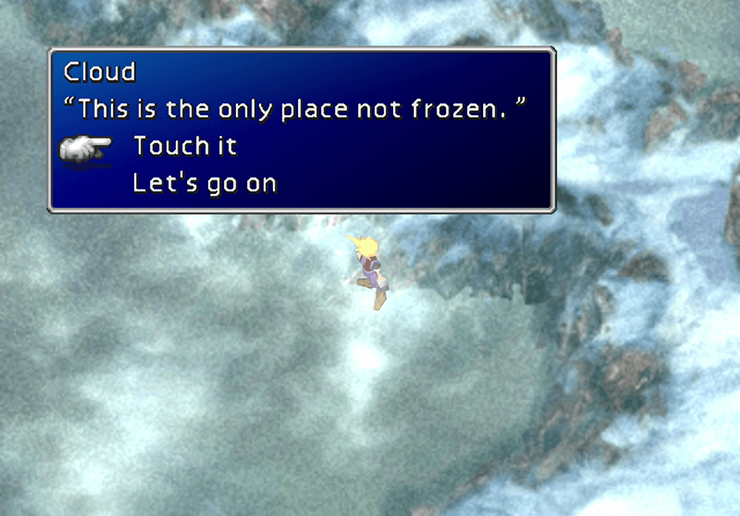 Travel northwest from there towards Area (13) which is a huge snowy field. Use the marker poles to help guide yourself as the camera will spin whenever the wind blows which makes it hard to keep track of which direction you are traveling. Make sure that you exit out the east side of the field. Follow the trail along until you reach the screen shown below. 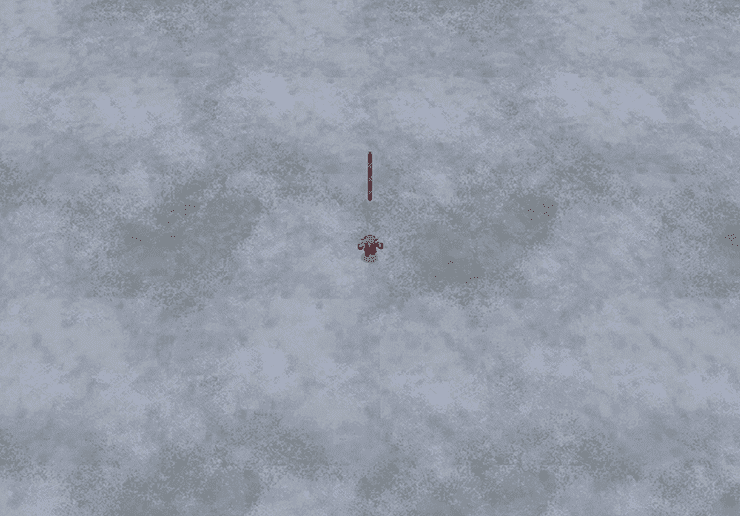 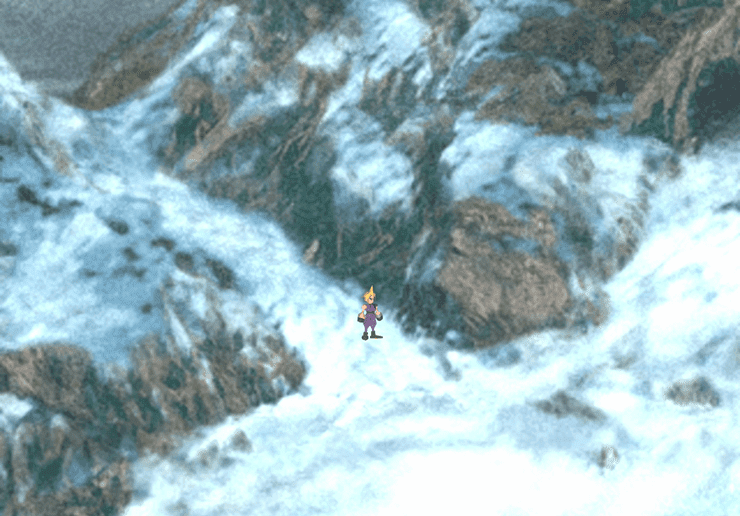 Enter the cave on the top right side of the screen and speak to the person sitting off to the right. Now that you have touched the hot spring this person will fight you. The fight is fairly straightforward - it is against an enemy called a “Snow” which you may have already fought once or twice in the Great Glacier Area.

The person will disappear after the fight leaving the

Alexander Summon Materia behind (notice the spelling error on the ‘received’ notification box in-game with an extra quotation mark). 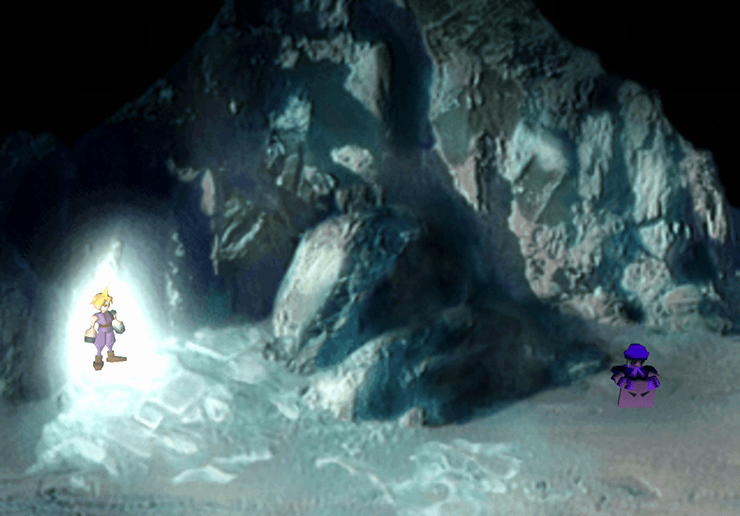 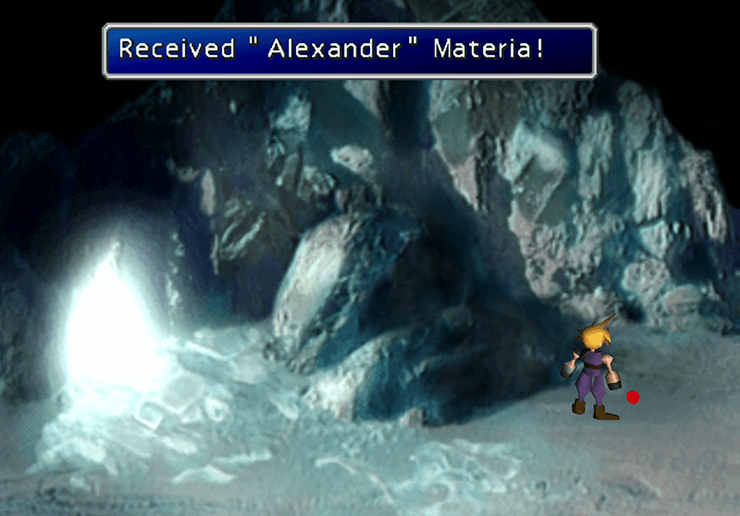 Finding the All Materia

All Materia in the center of Area (13). There is a huge rocky cave right in the middle of the snowy field - just keep traveling around the center area until you find it.

Make your way north from Area (13) at the Base of Gaea’s Cliff near Mr. Holzoff’s cabin when you are ready to continue. 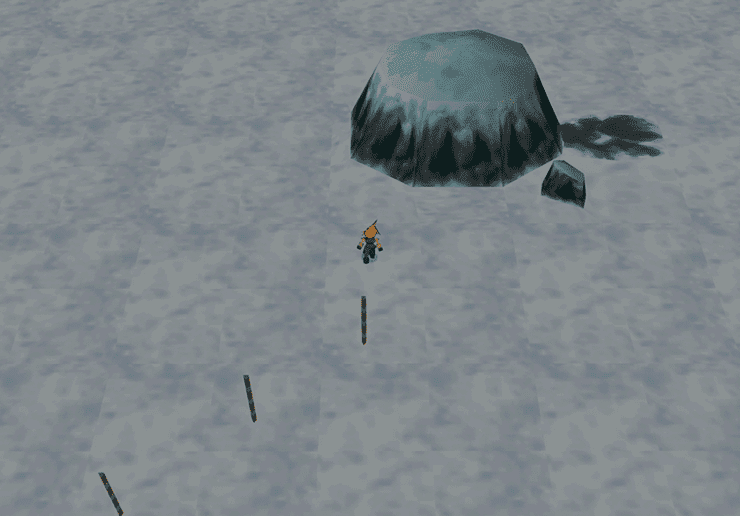 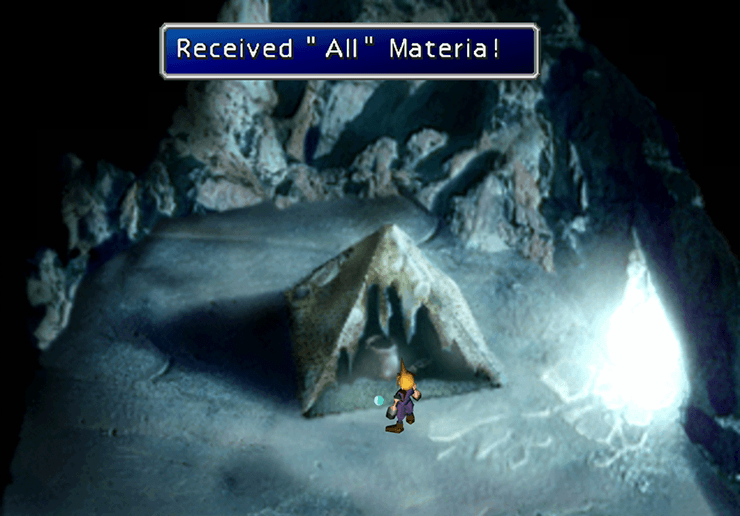