One of the most important aspects of equipping Materia is the effect that it has in terms of a character’s stats. In the bottom left corner of the screen each of the Materia has an “Equip effect” list that indicates what stats will be affected by equipping the Materia. For example, let’s take an in-depth look at Restore Materia. The stats affected by equipping Restore Materia are MaxHP (-02%), Strength (-01), MaxMP (+02%) and Magic (+01) as shown in the screenshot below: 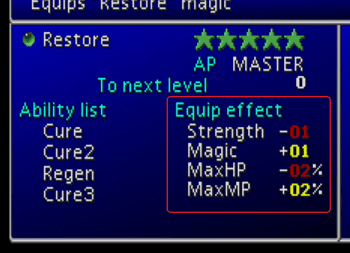 These stats affect the HP, Strength (Attack Power) and magic power the character equipping it will have. So is there a strategy to equipping Materia most effectively?

The first and most important thing to note is that if you don’t plan on using a certain Materia you probably shouldn’t equip it unless the stats it affects will benefit the character. Throughout the game you’ll receive a lot of summon Materia; many of which you won’t continue to use later on in the game (it’s hard to find time to use Shiva and Choco/Mog when you’ve got summons like Bahamut-ZERO and Knights of the Round in your inventory).

The next important thing to plan out is a role for each of the members on your team. Chances are that you’ll want to have one character loaded with

Restore Materia (paired up with an

Mega-All Materia) and plenty of bonus magic stats to improve their ability to heal. You’ll also want to equip one of your stronger characters with health and strength improving Materia and set them up to take more of the hits. This can be done by equipping certain Materia (such as Cover Materia) and placing characters in the front or back rows accordingly (check out the Front and Back Rows section for more information).

The most important lesson you can take out of this is that it can be highly detrimental to a character to load them up with Materia that you don’t plan on utilizing on a fairly regular basis. If you plan to make physical attacks rather than magic attacks your primary means of dealing damage then you should probably avoid equipping most of the Materia in the game, including nearly all unessential Magic (green Materia) and summons (red Materia).